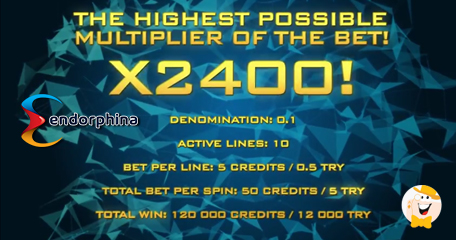 Endorphina has been cranking out the new slot games this month. The third release in April was Cuckoo (yep, just like the clock) and it’s already the focus of industry news headlines. Shortly after the Easter launch, two players found the ultimate prizes in personal egg hunts of their own. Does €40,000 or 2400x your bet inspire you to give Cuckoo a go?

A starcasino.be player known as DIRK17 tried his luck and it paid off in a major way - 40,000 EUR to be exact. He was betting €5 per line for a total of €50 per spin. Three clock symbols triggered the bonus game and the clock hands make their way around collecting credits, but your time is limited. The idea is to place the clock hands on the time you think the alarm may be set to in the hopes of making it before the porcelain bird pops out to end the bonus. In the case of DIRK17, he managed to grab 40k credits before cuckoo time.

Over at PokerKlas Casino, a second player made a risky play to achieve the highest payout possible. Also with a €50 bet per spin, the bonus was triggered. His guess was dead on and the clock hands made it all the way to a massive €120,000 payday or 2400x the bet.