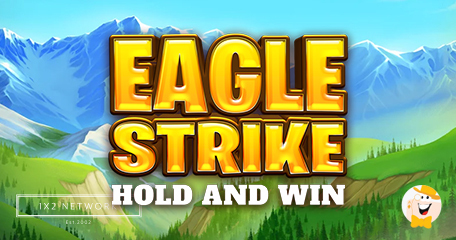 Sequel to Studio’s Most Successful Game Has Finally Arrived!

Iron Dog Studio, a forward-thinking provider operating under 1x2 Network, is happy to announce the latest addition to its colorful portfolio of feature-filled games. Dubbed Eagle Strike, the highly-anticipated sequel to Wolf Strike, the studio’s most successful online slot to date, takes place on a 5x3 grid and displays up to 243 ways to win.

Just like Wolf Strike, the newly-arrived sequel is exclusively available with Entain, one of the world’s largest sports betting and gaming groups. The exclusivity period ends on August 17, 2022, after which a global launch across the 1X2 Network is expected.

Set in the middle of colossal mountains, with large trees gently swaying in the wind, Eagle Strike by Iron Dog Studio is bound to take the viewer’s breath away with its astonishing visuals. The Eagle itself represents the Wild symbol of the game, while other animals act as the high-paying icons.

All the original features from the Wolf Strike are incorporated in this installment as well, but with noteworthy upgrades. The studio expanded on the core mechanics, determined to deliver a higher level of engagement and a more authentic player experience.

Chance Millett-Bangs, Slots Manager at Entain is positive that this launch will be equally successful as its predecessor’s noted:

“With slightly changed mechanics and some maths tweaks to improve the player experience, we expect to see improved engagement from our customers to make this our most successful Iron Dog Studio launch to date!”

As we hinted earlier, the Eagle acts as a Wild. Aside from serving as a substitute, it has the power to expand, opening room for additional winning opportunities. Landing three scatter symbols unlocks free spins. The best part of all is that they can be retriggered.

Furthermore, the Hold and Win feature is portrayed as a golden nugget. When six of them are found on the reels a player enters Eagle Strike’s hold and win rounds. On top of that, the Hold and Win nuggets can appear as stacked like the regular icons even in the base game. There’s Strike nugget as well, in charge of triggering one of the three Jackpots incorporated in the game- Mini, Minor, and Major.

A detail worth noting is that…

…the Hold and Win bonus has an expected trigger rate of 1 in 120 spins, with Free Spins 1 in 150. When combined, a player can expect lots of action on the reels, as one of the features is expected to trigger once in 66 spins.

Presented during spring 2022, also via exclusive deal with Entain, Wolf Strike quickly became a huge hit among players. Taking place deep into the wilds of the North American frontier, the game captures instantly with its breath-taking visuals. Wolf represents the Wild, while other animals are high-paying icons- the same pattern that Eagle Strike followed.

When three or more scatters land on the reels, free spins are initiated. Should six golden nuggets hot the reels, a player is taken to the hold and win mini-game, where every nugget landed pays out its cash value. Also, when 3,4 or 5 Wolf paw jackpot symbol enter the stage, they pay out a 50x/250x/1000x jackpot respectively.

“the highly-anticipated sequel to Wolf Strike”

Excellent way to upgrade one of its most popular games. I hope this one will be equally well-received.