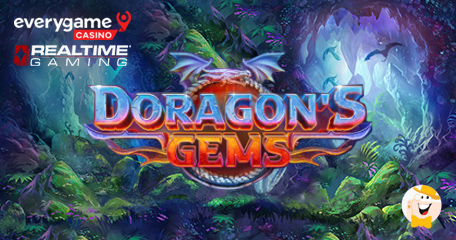 One of the most popular RTG-powered online casinos, Everygame Casino announces another captivating addition to its colorful portfolio of games. Equipped with Cascading Wins and a unique Gamble Feature, the reels of Doragon’s Gems slot are all about action and rewards.

As usual, the operator has prepared an interesting bonus to celebrate the expansion of its catalog. Until September 15, players can claim a massive introductory bonus of up to $5,000 and a set of 50 casino spins to explore the newly added release.

Dare You Enter the Land of Terrifying Beasts?

Taking place on a 3x5 grid, Doragon’s Gems introduces players to the dragons, in charge of keeping the most precious treasure. Those who are brave enough to venture into the territory guarded by these majestic beasts will have the opportunity to collect some of the most valuable gems on Earth.

Aside from impressive visuals…

…Realtime Gaming made sure its most recent installment displays a powerful set of features. The first one that captures the attention is the Cascading Wins mechanics. When a winning spin takes place, winning symbols drop off the reels allowing new symbols to cascade into their place.

In case a player triggers another winning combination during the cascade, a 1x multiplier is added to the Multiplier Trail, increasing the prize. The Trail resets once the losing combo hits the reels.

Furthermore, there’s the Wild symbol, presented as a Golden Dragon Egg, while the Scatter is depicted as a Dragon Eye. Landing 3, 4, or 5 scatters awards 7, 10, or 13 free games respectively.

The list of interesting features and options found in this highly volatile game doesn’t end here as there are a couple of more mighty ingredients. With Bonus Bet, consumers can increase their current wager by 25% and add more scatters to each reel every time, which means more opportunities for free spins.

On the other hand, if one wants more certainty, there’s Buy Feature, which enables direct access to bonus spins, where a player can apply Gamble Feature, and score even more.

A Multiverse of Bonuses and Promos

…there’s an ongoing campaign valid until August 31, for Nine Realms https://lcb.org/games/nine-realms , previous addition to the catalog. Spreading across 5 reels, this highly volatile title accommodates up to 78,125 ways to win. It hosts a couple of authentic features such as the Mystical Zone, which increases the chances of scoring a big win along with Gatekeeper Portal, where losing spins are converted into winning ones.

Finally, there’s a $270,000 Beach Party bonus contest until September 5th, with weekly prizes. As they play games, customers can earn points. Every week top 300 participants win up to $500 each.

Make sure to read the Terms before participating. Have fun and gamble responsibly!

“an interesting bonus to celebrate the expansion of its catalog”

What a cool game, the graphics are unreal and who doesn't like dragons I MEAN "DORAGONS"! :)

This summer is all about bonuses and fantastic games!