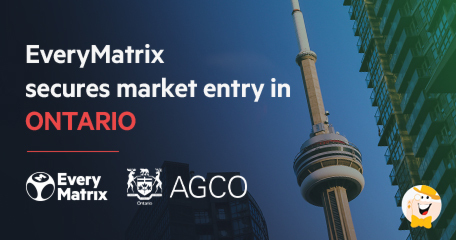 After signing an important deal with 888casino to strengthen its position in the rapidly expanding U.S. market, iGaming platform provider EveryMatrix has officially announced entrance to Ontario.

The company has secured a license and is now preparing to enter the jurisdiction under the new regulations. By receiving the permit from AGCO (Alcohol and Gaming Commission of Ontario), EveryMatrix has obliged itself to nurture the players’ safety while offering its online turnkey solutions.

After entering the newly regulated Canadian market, EveryMatrix will distribute its own proprietary content via in-house content partners Spearhead Studios and Armadillo Studios. They are now the engine for developing technology within sportsbooks and casinos all over the world, including Germany and Malta.

The two studios now have over 100+ games in total, featuring all kinds of themes, like North American, branded, and even sports-related. Recently, the second acquired studio launched The Lioness, featuring former MMA champion Amanda Nunes. Also, among other hits is John Daly: Spin It And Win It, made after the character of a prominent figure in American golf.

“Obtaining the registration approval from the AGCO is an important milestone for us in our North American expansion,” commented Erik Nyman, president of EveryMatrix Americas.

According to his statement, the company is very excited to provide its products to existing American customers and of course other operators entering Canada’s largest jurisdiction.

The Ontario market officially opened after three years of preparations. Among the studios that have joined this region in Canada are Evolution, Microgaming, Pariplay, Playtech, Play’n GO, Nolimit City and others, with more to enter in the upcoming months.

Ontario is an important and popular marketplace in the iGaming space, and many software providers are considering to join this jurisdiction. The opening of the regulated online sports betting and gaming landscape created a strong response from casino operators, and many are now urging to launch into its territory.

Going Strong in the U.S.

This partnership will support EveryMatrix’s strategic goals in the thriving U.S. market, since the supplier already nurtures firm presence with a key commercial studio in Miami. In recent years, EveryMatrix has also entered multiple jurisdictions, including New Jersey, Michigan, West Virginia, and Pennsylvania.

“The company has secured a license”

EveryMatrix does not have a bad selection of games, Ontario players will be satisfied.

Ontario, yours to discover... :) I feel whoever enters the market in Ontario early and gets the appropriate licenses they will benefit greatly in the future as they were in early..

The powerhouse is coming to rule the galaxy! Obi wan has taught them well.