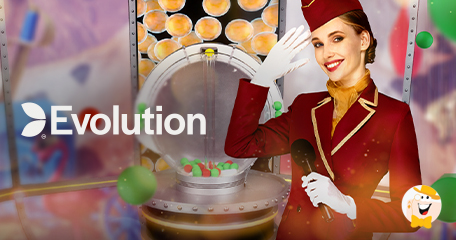 Days after presenting its own version of the classic Asian bead game of chance, Fan Tan, Evolution is back to announce the launch of Cash or Crash – the company’s next-in-line high-flying live game show.

Players are once again invited to take off on an augmented reality blimp ride and compete for astonishing wins up to 50,000x high over a metropolis. The studio’s latest product comes with a soaring 99.6% RTP and could well be one of the most generous and player-friendly games ever offered in iGaming.

Described as the provider’s next immersive game show, Cash or Crash from Evolution will require some strategy to stay afloat. It all comes down to red and green balls, including a special gold ball.

Just like with every typical raffle drum, a single ball is drawn at random, but if it isn’t red, the player is offered money.

This amount can be either claimed and cashed out, or used for the next round. In this case, players take half and keep going, or continue and keep competing for bigger prizes, goingall the way up to 50,000x.

In addition, players must cash out before a red ball is drawn or the blimp crashes and they lose. The gold ball acts as a shield, protecting players from the next red ball but it also increases payouts.

According to the studio, this game show requires strategy as it puts players in control, unlike Crazy Time. Likewise, after a green ball is drawn or a gold ball shield is broken, competitors can choose either to continue, take half of their winnings and even continue with the remaining 50%.

There is also an option to take all and cash out winnings to finish the participation in the current round. Here’s how it looks in reality:

“This year we have chosen to introduce more decision-making and strategy into our game shows to expand the space to a wider and new audience. This is not just a strategy game, but it is a skill-based game and at that it is the most generous game players have ever seen in online,”

Cash or Crash has a 99.6% payback rate when played optimally, revealed Haushalter. With 20 balls in game, and just 8 red balls, players should have a chance to cash out 71% of the time on average.

To avoid complexity and confusion, there will be no side bets, just a pure gambling experience that keeps every contestant on the edge of their seat.

This category delivers more fun, interaction and thrills to players than ever before, giving them a chance to experience extra layers of excitement and win big on Crazy Time, Monopoly Live, Mega Ball and more.

Yes its a game changer it change the whole thing, I like this game very much ,kindly play and gain your life

What a remarkable title with powerful features!

A typical lottery game but the level of graphics running in the background is highly amusing and entertaining. The hostess is also a hottie, I have a feeling these games are the future, just imagine you could play your favorite slot in this setting – kaboom!