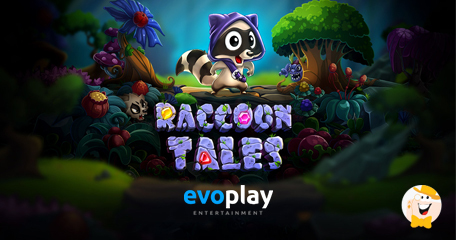 Slot specialist Evoplay is ready to release their latest video Match 3 slot - Racoon Tales! The game, themed around the exploits of one very playful raccoon that finds caves filled with treasures - and fights monsters and dragons in the process.

What is peculiar about this game is that the action takes place both on the reels AND in the background’s forest! The two planes are intertwined: the amount of winning symbols on the reels will determine the power of raccoon’s attack on a rival.

So Much to Play For

Evoplay’s game, whose release date is still undisclosed, has RTP of 96.2%, very high volatility and is playable in vertical/portrait mode on mobile phones, as well.

It has a 7x7 configuration of reels and a hit frequency of 44%.

The game’s standout features are:

Battles With Monsters - Defeating one of the five types of monsters activates:

Random Events - Players will encounter bonuses laying on the ground, such as:

Extra Spins: Racoon faces the dragon - that is, one of the three dragons. The type of dragon will determine the bonuses that will act during the Extra Spins.

GREEN DRAGON: All winnings are boosted by Multipliers. Being x2 at the beginning, a multiplier may be increased up to x6.

BLUE DRAGON: During every round Double Wild symbols drop on reels, occupying 2 cells vertically. The mode starts with 2 such symbols and may increase up to 6.

RED DRAGON: During every round, up to 4 symbols may turn into Wild symbols. Maximum amount of such transformations is 20

This game comes immediately after Evoplay has announced ANOTHER forest-themed game - Forest Dreams.

This slot game is actually inspired by the works of the Japanese animator Hayao Miyazaki and his famed breed of Anime characters.

The 20-payline game with an RTP of 96% was commented on by the CEO Ivan Kravchuk, who said that “with inviting Far-Eastern symbols, an immersive theme and flawless mathematics, the release fits perfectly with our pioneering portfolio comprised of more than 100 hit games.”

Evoplay made an outstanding job with the Raccoon Tales. I tried the demo version and I can't wait for the game to go live! This feisty Raccoon bought me - completely!!!