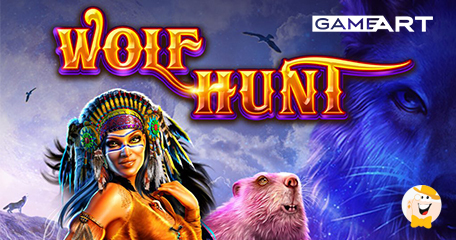 Launching a new title in January is a majestic precursor for ICE London, a B2B gaming event that brings together the international online and offline gaming sectors. Among the attendees is also GameART, producer of digital gaming solutions whose latest release officially launched on January 14th, 2020.

Wolf Hunt comes in a 5-reel configuration followed with 25 paylines, complimentary spins, a bonus round and medium volatility. This story is taking its players to the uncharted wilderness of the old American northwest, home to native tribes, mountains, deer, beavers, eagles, snakes and grey wolves.

Aside from the main highlights, players will also face wilds and scatters, capable of substituting other symbols or triggering mini games respectively. Also, there is a beautiful native girl in a feathered headdress, who is also the bearer of bigger rewards.

Coming face to face with wolves in a wide-open area is also accompanied with gigantic symbols, awarding 3 extra rounds with no limit to the number of retriggers. Likewise, there are 6 or more Golden Footprint images on the trail of the wolfpack, capable of activating the Wolf Respins feature.

During this stage, players might set off one of the four jackpots displayed on the screen, including a mini, minor, major and grand prize. However, to reach the mega mother lode, players must fill all 15 positions with Golden Footprints. Ultimately, there is even the Double up feature, enabling lucky treasure hunters to multiply their winnings up to five times.

The lowest bet in Wolf Hunt starts with $0.25 per spin, while increasing the bet per line might even allow skilled betting with $125.00 for a single reel rotation. Notice that the value of jackpots and payouts is fully augmented when playing in this mode.

According to the supplier, the official RTP is set at 96.1 percent and gameplay is fully supported on mobile devices.

The rapidly-growing provider of HTML5 slots with stunning art solutions will display its latest achievements and games at this year’s iGaming conference ICE London, starting on February 4th, 2020.

At the stand N9-130, visitors will be able to gain insights into GameART’s recent releases such as Norn’s Fate, Dragon Whisperer, Chili Quest, Book of Oziris and Azrabah Wishes. The company will be represented by Almir Kudic, head of account management, Alen Sutic, regional sales manager, Dea Kravos and Irena Troha – account managers.

GameART invests not only in slot development but jackpots games, VLT games, mobile apps, technical support and client support. The company is licensed in several jurisdictions, including Curacao, Italy, Philippines and Romania.

Looks very similar if not identical to Wolf Gold by Pragmatic Play, which is actually one of the biggest successes in 2019.