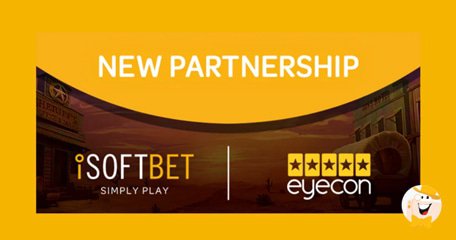 After sealing several landmark deals with major industry suppliers over the last couple of months, Eyecon is finally going live on GAP, a leading aggregation platform from iSoftBet with more than 8,000 products.

As a result of this agreement, the foremost content aggregator will add hundred Eyecon slots, including revolutionary editions Fluffy Favourites, Shaman’s Dream and Fluffy Too. Each game will be available via Game Aggregation Platform after the integration, allowing players in the UK and other regions to acquire instant access to content upon joining with a preferred partner casino.

Known as one of Australia’s highly established and acclaimed casino game developers (now part of Playtech), Eyecon has produced a series of mega hits to date, including the above mentioned classics and their sequels – Shaman’s Dream 2, Temple of Iris 2 or Beat the Bobbies at the Tower of London. These titles are favorite picks at many online casino brands, whose majority will now gain access to them through the global GAP platform.

Currently, the network counts more than 8,000 titles from 70 leading studios, such as 1X2 Gaming, Ainsworth, Betsoft, Booongo, Endorphina, Habanero, Nolimit City, Pariplay and more. In return, the GAP will provide Eyecon admission to a suite of player engagement solutions and gamification tools such as iNgame, which is specifically developed for attracting and motivating users to engage in a friendly way.

Thanks to its dynamic and flexibility, GAP represents one of the Go-To aggregation platforms on the market. It is based on a single integration, enabling the world’s largest brands to swiftly access many regulated jurisdictions – Germany as well, since the provider fully complied with the new regulation regime in the country.

Truth be told, iSoftBet has also increased its collection of slots in the previous period, now containing more than 150 thrilling titles such as top-performing Hot Spin and Gold Digger. The studio has also expanded its Megaways series, enriching it recently with Western Gold Megaways, Morgana Megaways and Majestic Megaways, where players can reach up to 117,649 ways to win and trigger really huge wins.

“Eyecon has created some of the industry’s most iconic content for more than a decade and we’re delighted to be able to offer our extensive range of global GAP platform customers with access to their game-changing slots.”

“We are really excited to launch Eyecon games across iSoftBet’s platform. This is a great opportunity for us to increase the reach of our games via the iSoftBet distribution providing their customers and players with our market-leading titles.”

The leading online games supplier with several offices around the world, iSoftBet, has also been very successful in other fields this year. At the end of October the company won the Compliance Outstanding Achievement Award at this year’s Vixio Global Regulatory Awards. It represents one of the industry’s most prestigious compliance accolades.

“I am extremely delighted and proud of the company’s achievements this year. Compliance is central to our decision making and is a pillar in our company culture and we pride ourselves on investing in and employing the best talent to understand and act upon complex regulatory issues.”

iSoftBet was named the winner in the category following an outstanding 12 months across newly-regulated markets.

Two suppliers with a very impressive way of working, this partnership looks fantastic to me

Nice of them to team up, although GAP already provides an enormous number of slots. Eyecon is on the other hand very popular with bingo sites, and usually the #1 supplier to choose due to Fluffy Favourites and Shaman’s Dream, one would say 101 for every platform and beginner.