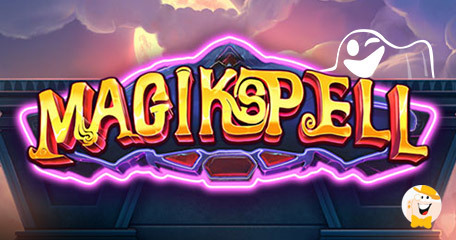 One month after launching a volatile, steampunk fairytale called Alice in Adventureland, Fantasma Games is back to deliver a spellbinding experience on every single spin in Magikspell.

The developer of slots beyond gambling is taking players to a dark and mystical land with wizards this time, whose magic can conjure up plenty of big wins, rising up to 20,000x the stake on a good day!

The next incredible volatile fantasy from Fantasma Games plays out on a 3-4-5-4-3 reel set with 20 paylines. During regular play, purple gems will leave behind Magik Ring frames which are collected in the Magik Meter, leading to wild releases at random. The meter adds more rings and it upgrades the bonus multiplier that can reach 250x or more.

Magikspell will become available at partner casinos thanks to Relax Gaming and its far-reaching Silver Bullet platform. After loading, players are immediately taken to a foreshadowing castle set deep within an eerie forest. Those that dare to enter and spin the reels become enchanted and tasked with finding the Purple Magikspell Gems.

If they locate them, it is possible to unlock some truly spellbinding features, such as bonus spins with a 250x multiplier, for example.

On their search, though, players should keep an eye out for the Magikspell Gold Gems, since they use an ‘infectious’ mechanic that transforms all adjacent symbols into wilds!

Still, the real magic happens when progressive complimentary spins kick in, allowing players to trigger a multiplier of up to 250x, delivering true legendary wins in the range of 20,000x the bet.

In terms of volatility, Magikspell sits at the higher end of the scale. The game’s theoretical return to player rate is 96.08% and it has already been certified in key regulated markets such as the UK, Malta, Sweden, Gibraltar, Denmark, the Netherlands, Latvia, and so on.

“Magikspell promises to take players an on an enchanting journey to a dark and mysterious land. But with plenty of gems to be found, and Magik bonuses such as Free Spins and massive Multiplier to discover, it is a place where players will want to be,” commented Fredrik Johansson, founder at Fantasma Games.

According to the founder, the studio’s latest game from April has been developed in a creative engaging narrative that brings thrilling gameplay time and a truly magnificent experience.

In case you missed the studio’s earlier releases like Wins of Nautilus or Caravan of Riches, perhaps it’s a good idea to go on a road to riches and check out the last month’s groundbreaking 3-4-5-4-3 reel slot with 20 lines, special symbols, scatters, symbol upgrade and bonus spins, as well as the Silk Road feature.

The latter is triggered when a cluster of matching concurrent character symbols spans across reels 1 to 5, enabling all matching character symbols and wilds to activate single reel spins. These can land on Blank, Coin or Scatter symbol and reveal a cash prize.

“players should keep an eye out for the Magikspell Gold Gems”

That looks very good. I will take the chance to check it out.

Fantasma Games is back with another great title! I love when they use darker colors and cool light effects that remind me of neon lights. It's a great job done and I just hope that they continue providing us with great games!

The animations and the theme of the game are very well designed. I like it very much!

I like the way they sync graphics with payouts. This is a great new addition, but basically everything from Fantasma is a real kicker, so... I highly recommend it!