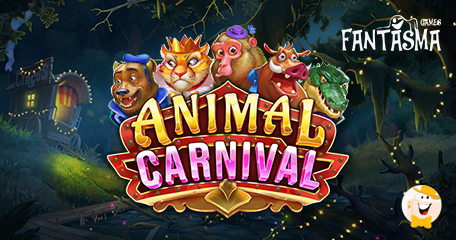 The Stockholm-based studio with a vision to create slots beyond gambling, Fantasma Games, has announced the launch of a new game in partnership with Relax Gaming.

Introduced all over Europe to more than 150 operators across 500 brands, Animal Carnival will reach an immense base of players from Entain, Paddy Power, Betfair, LeoVegas, Svenska Spel, and other big names in the industry.

After presenting Flower Fortunes Supreme and Cloud Corsairs, Fantasma Games is back with a new game where players are thrown into a magical forest. This unlikely place is filled with circus elements, but also a very exciting game mechanic, which has shown good results in numerous markets in Europe.

The launch of Animal Carnival is live through an exclusive collaboration with the aggregator Relax Gaming. It officially launched on August 31st and it can be played for free or real money at all partner casinos.

“Animal Carnival has already received a positive response from the majority of operators globally before launch, and I therefore look positively on the game's contribution to the company's further profitable growth going forward,” commented Fredrik Johansson, CEO of Fantasma Games.

The chief executive is proud of the fact that the studio is rapidly strengthening its presence in an important European market where it’s becoming part of a larger group of leading operators too.

“Animal Carnival will reach an immense base of players”

Among the main features in the newly launched game are Double Build up, Sparkle Wild, Cannon Respin, Buy Bonus, and of course, complimentary spins.

See more in the official trailer:

By the end of this year, the roadmap will bring more titles to new and existing markets, and the company has high hopes when it comes to achieving supreme results.

Recently, the Swedish powerhouse for developing online casino games for mobile platforms has presented itsinterim report for the second quarter of 2022. It refers to the period between April 1 – June 30, which has once again reported the strongest quarter to date with strong growth and profitability.

“Animal Carnival will reach an immense base of players”

Another incredible Swedish studio that makes incredible slots, can’t wait to check this one out!