Fantasma Games Powers its Suite with Wins of Nautilus Megaways 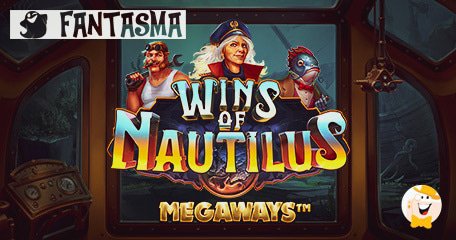 Fantasma Games, a developer of excellent slot content, invites players to join a submarine adventure in the newest release, Wins of Nautilus Megaways.

The new game takes inspiration from Jules Verne’s Twenty Thousand Leagues Under the Sea and mixes this with impressive visuals, stunning graphics, and authentic sound effects.

Wins of Nautilus Megaways utilizes Big Time Gaming’s innovative reel matrix to provide up to 117,649 winning ways with every spin, but the immense win potential does not stop here. The particular Countdown Bomb Feature appears as a blocker with a countdown digit that ticks down as the title is played and the reels avalanche. This provides a full reel Wild with a massive Multiplier when the Countdown Bomb blasts. This occurs when the user has won several times via the avalanche.

While you are playing the title, you should also pay attention to the Respin Torpedo which removes random non-winning elements and causes the reels to avalanche, providing a second chance for winnings to appear. The feature guarantees a minimum of one avalanche and blends with the Countdown Bomb to keep players stuck in the underwater world.

Wins of Nautilus Megaways has been created to appeal to users that enjoy Megaways slots and that look for games that provide Full Reel Wilds. It has an RTP of 96.10% and enables players to buy the bonus feature for 80x the stake in certain markets.

Speaking on the new addition to the suite, Tianzhi Zhou at Fantasma Games expressed his opinion:

“Wins of Nautilus Megaways takes players to an underwater world packed with adventure and big win potential. We have taken the legendary work of Jules Verne and put our own twist on it to create a game that visually is like no other – it is truly striking.”

The company has combined this with engaging gameplay including its innovative Countdown Bomb feature which enhances anticipation with every spin. Wins of Nautilus Megaways is a powerful addition to the brand’s growing portfolio of slots that go beyond gambling and they look forward to seeing players enjoying the adventure of a lifetime.

“Latest slot from Fantasma Games is based on Jules Verne’s Twenty Thousand Leagues Under the Sea and offers a unique Countdown Bomb feature”, europeangaming.eu, December 1, 2021.

A great game inspired by Jules Verne's novel. The graphics in this slot are superb.

What an incredible game from the provider!