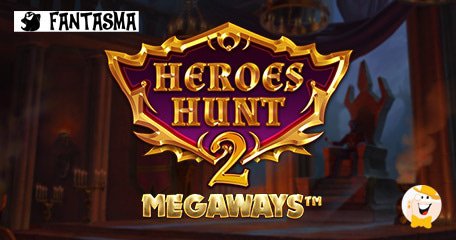 Supplier Traverses Back to the Fantasy Medieval World

Two weeks have passed since Fantasma Games launched Bounty Showdown, a gun-slinging slot featuring a Western-themed setting where players must take down three raiders and claim their share of the loot.

Now, the Stockholm-based studio that focuses on innovative casino games for mobile platforms, is back to deliver a sequel to its most successful slot to date – revamped to provide even more engaging and entertaining player experiences.

As of 27 September, Fantasma Games is taking players on an incredible new adventure in the second installment of its blockbuster series, Heroes Hunt 2.

Designed in the style of its predecessor, Heroes Hunt Megaways, the follow up comes with a range of animated sequences where archer puts an arrow to his bow, the wizard gathers her spells and the warrior draws his sword… only to reach the game’s highest payout cap of 20,000x the bet.

The main mission of players is to lead the heroes through the castle to defeat the evil presence and claim the treasure. As already mentioned, each character is unlockable and delivers a unique bonus feature.

For example, the archer will shoot a respin feature where each respin symbol removes itself and allows four to nine random non-winning regular icons or blocker symbols to appear. As a result, new symbols also fall to create win opportunities.

There is even a multiplier in this round which is activated in the base game or added to one extra spin if it emerges during the Vampire Free Spins level.

In the meantime, the witch will conjure an explosion feature causing all exploding symbols to erupt and remove themselves, enabling non-winning regular and block symbols in one or two 2x2 areas to appear.

The warrior draws an expanding wild that can grow to cover the entire reel and remove all symbols above or below it. Heroes Hunt 2 comes with two different Free Spin rounds, created to help players on their quest of hitting the highest possible prize. They are called Vampire Free Spins and Werewolf Free Spins.

Designed as a Result of Teamwork

In certain jurisdictions, customers willeven have the option to purchase both the Vampire Free Spins and Werewolf Free Spins bonuses.

“Heroes Hunt is our most popular game launch of all time, so a lot of work has gone in to Heroes Hunt 2 to ensure it takes the player experience to the next level.”

He added that the studio has even collaborated with operators, streamers, affiliates and players to learn how to make the game even better for the market and then incorporated new elements into the original design.

Johansson explained that the result has given a highly animated, narrative led game that delivers increased levels of entertainment, which is crucial for building big win anticipation with every spin.

“each character is unlockable and delivers a unique bonus”

as always with Fantasma Games you collect yourself broken, only to have really nothing at all in the free games. or go home with 7 euro. although i like the Heros Hunt series - that's only something for entertainment, if the bankroll is big enough.

Great news, especially for those of us who liked the first part, this sounds great, definitely something I'll try

Great release, I loved the previous one. Can't wait to try this one out. :)