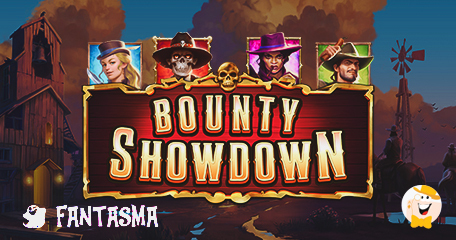 Fantasma Games, one of the most established providers of casino content, has just announced that its Bounty Showdown game is available network-wide after an exclusive launch period via Kindred Group.

Thanks to the global introduction of the game, gambling operators around the world will be able to offer this remarkable, Western-themed slot to their players. After entering the game, players are taken to the Wild West town where they must defeat three raiders to receive their part of a huge award.

The raiders have entered the town looking for revenge after their friend, Mr. Joe Boneson, was hunted for the amount of $50,000. People from the town tossed Joe’s body to dogs and now raiders look for retribution.

As soon as you enter the slot, your task is to defeat the raiders with three bonus features, including a Bonus Wild that lands on all reels and replaces all symbols. If two Bonus Wilds appear during the base game, the Double Bonus Respin feature is set in motion. Line wins are assessed and paid out before the 2 reels where the Bonus Wild elements landed are locked and the remaining reels re-spin.

If 3, 4 or 5 Bonus Wild symbols appear during the Respin feature or the main game, 10, 15, or 20 Showdown Bonus Spins will be awarded respectively. The feature kicks off with a Gatling Wheel bonus game. The Wheel consists of 16 positions, each with a multiplier value between 1 and 100. Players receive 3 spins on the wheel, with a Multiplier chosen at the end of every spin. The Multipliers are then added and the Bonus Spins get underway.

Every Bonus Wild element that appears during the feature will pay an identical to the bet multiplied by the existing sum of all the chosen Multiplier values.

“We are thrilled to launch Bounty Showdown to our network of operators following its period of exclusivity with Kindred.

“The slot has performed incredibly well and we can’t wait to see even more players hunt down the raiders and land some potentially explosive wins of their own. The game punches hard, and when it does it is a great result for the player.”

According to his opinion, the recent step by the company is another example of how they develop games that go beyond gambling and provide a thrilling and engaging experience from the initial spin.

Great news! Nice to see that the popular Bounty Showdown title has launched an entire network! Good luck to all players!