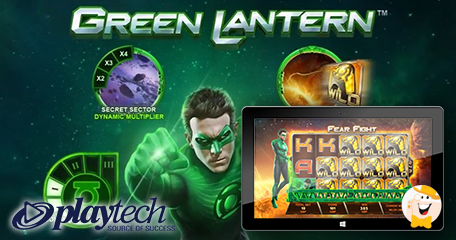 Playtech will soon launch the next phase in superhero slots in February. Following its partnership with Warner Bros, they got to work on a branded ‘Green Lantern’ video slot that’s sure to save your bankroll.

It’s going to be a 243-ways to win game with a minimum bet of 40 cents per spins. The theme comes from the 2011 film featuring Ryan Reynolds. In other words, it’s a definite hit for the ladies. The first time the world met Green Lantern was in 1940, but there have been several main characters since the golden age of Alan Scott.

In addition to spinning among a group of special features, the excitement builds with a multi-level progressive jackpot, known as DC Super Heroes Jackpot.

Comic book fans got a taste of Marvel branded slots for several years now, but following Disney’s purchase of the brand, they decided it wasn’t fitting to renew licensing contracts for slot games. This left room for DC to cash in on the concept. Few Marvel slot contracts remain, but once they’ve all expired, the games will go with them.

Keep an eye out for the game to go live next month.

If am correct we actually seen some sort of green lantern version by other providers with multipled wild symbols and free spins, wondering how that one will be different

looks like a pretty interesting new slot. Am not a fan of playtech but ill give this one a spin or two.