Foxium Sets Sail for an Adventure in Boom Pirates 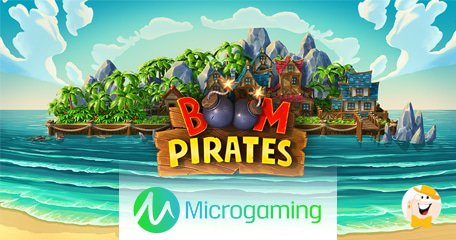 The season of Microgaming’s proactive slot launches in partnerships with various gaming studios at full swing, as another provider of creative casino products, Foxium, gets into the groove for Boom Pirates, latest dynamic slot packed with animations and impressive artwork.

Known for combining storytelling and a high level of gamification, Microgaming’s exclusive content partner is bringing together Captain Mary, Jolly Roger and a band of pirates with “shipload of treasures” pending behind all-new Wonderways and Foxify features.

To plunder the riches of the seven seas, players will have to trigger the Boom Pirates mode, during which cannon fire transforms the five-by-four reel configuration into a glorifying nine-by-six pattern. In addition, the game will feature 10 million ways to win.

To increase their chances of hitting one of the three trailblazing features, players will need to activate Foxify which raises the initial bet by 50 per cent. By doing so, they will be adding extra gunpowder to the cannons and set off a bigger grid explosion.

Providing assistance in this adventure is of course Captain Mary, who randomly swings into action to turn the non-winning spins into a five-of-a-kind combo. Likewise, the Cap’n will sing pirate’s favorite tune with shipmates, as Yo-Ho-Ho scatter symbols start falling on reels one, three and five. By entering the extra spin mode, players are taken on a mysterious treasure hunt with activated Wonderways.

Since this is a pirate-themed game, players will also be presented an option to purchase free spin rounds for the pirates’ price of 100x the initial bet. In this mode, the buccaneers rummage the bounty of free rounds at random.

Ake Andre, CEO at Foxium said about the new slot:

“Boom Pirates is set to be an explosive success and marks the maiden voyage of our new Foxify and Wonderways technologies, which we believe will transform the player experience and enable our creative teams to take game development to the next level.”

Director of global operations at Microgaming, leading software company with headquarters in the Isle of Man replied:

“Boom Pirates is full to the brim with thrilling features, new mechanics and a soundtrack of sea shanties not to be missed. Captain Mary takes players on an exciting adventure as they navigate the game’s cannon fire, swashbuckling pirates and quests for treasure.

The Boom Pirates feature expands the reels to an astounding nine-by-six grid with over ten million ways to win, offering players the potential for substantial rewards.”

To see the official trailer and get to know all features, take a look at the video below.

“gets into the groove for Boom Pirates”

This is the third or fourth release in like 4 weeks. I think I’m finally starting to understand why Microgaming collaborates with so many gaming studios.