From the Players, for the Players Dares to Make Leap of Faith with Vesper Casino (on our Warning List) 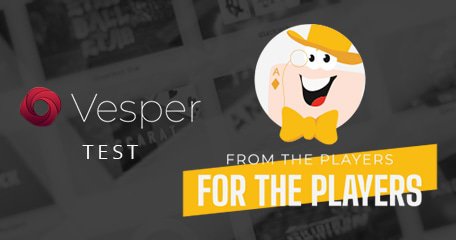 Would You Go the Distance with a Casino on Probation?

Many bad betting sites have popped up on the scene lately, causing some players to weigh down our forum with complaints and dissatisfaction. One of such gaming destinations is Vesper Casino, which caught our attention in October 2020 when LCB scouts tracked down pirated software on the platform.

After discovering the fake versions of NetEnt, Novomatic, Aristocrat and Igrosoft slots, we had no other choice but to put this brand on a warning list. At first, things looked promising, as the operator got some fake games removed. Unfortunately, it soon turned out that a portion of pirated software is still very much active and the casino remained on the warning list.

In June 2021, a new management took over the gaming site and their task was to remove all pirated software and regain the trust of players. At the time, after having verified that the slots are genuine and hosted on Slotegrator platform, we decided to give the brand a chance and placed them on a 2-month probation, closely monitoring their activities. However, at the end of the probation period, the operator still had pending unresolved complaints with regards to payouts and requests to close player accounts. Having failed the probation, Vesper Casino was returned to the warning list.

To check how the site fares now, we asked our testers, MarijaS and JovanaV, to make an evaluation and bring us first-hand information on what depositing, playing and withdrawing at this place really looks like. But before that, we made sure to once again check the platform for counterfeit products: at the time of this writing, Aristocrat and Novomatic games are not hosted; NetEnt games are listed, however they don’t seem to load properly in real-money mode.

We actually tested this casino twice, using two separate accounts. The first time, our tester MarijaS deposited and verified the account, but she was unable to meet a straight deposit wagering requirement and never managed to cashout.

By all means, we wanted to attempt a cashout here and see how the casino handles it, so we had another tester, JovanaV. create an account, verify her documents and deposit. She eventually made a successful withdrawal.

Both testers have been part of our project “From the Players, For the Players” for some time now, so bear with them as we discover more about this brand. To give you a head start, see our short recaps regarding the first and second test here.

Hoping that we’ve got your attention now, let’s go slow with this one – step by step.

MarijaS’ two-fold testing of Vesper Casino kicked off on September 1st right after checking the T&Cs in regard to verification and payment methods. The sign-up procedure starts by entering a valid email address, country and accepting the terms. Continuing on the same day, she provided all account data to complete her profile and decided to verify the identity by uploading a personal ID.

MarijaS also added a screenshot of last month’s phone bill, as required by the operator. Some 25 minutes later, an email from the casino informed her that the account was successfully registered.

The tester wanted to deposit without claiming the welcome bonus, however, the Cashier doesn’t offer an option to refuse the bonus upon entering a deposit amount, so she contacted customer support. The casino support emailed her back on September 2nd, advising her to try and cancel the bonus via live chat. She did so and on September 3rd, our tester was told to “cancel the bonus before the game starts in the bonus tab in her personal account.”

MarjiaS hit the cashier and placed a $200 deposit via Skrill on September 7th. The depositing process took only a couple of minutes, by the way, allowing our player to finally take a closer look at the library.

There is a 3x wagering requirement on straight deposits at Vesper Casino, but thousands of games in the lobby to help you fulfill their request before cashing out.

Among its providers, our tester picked Betsoft to start, making her first spins on a handful of established titles like Fa-Fa Twins, Alkemor’s Tower as well as Dragon Lady by GameArt.

Keep in mind that MarijaS was required to play through $600 to meet the x3 straight deposit wagering requirements before becoming eligible to cash out any winnings.

Despite smaller ups and downs, she continued chasing the right slot that could help her cash out at least some money before calling it a day.

That being said, she picked Nian Nian You Yu from Playtech as her next choice, Dragon’s Fire Megaways by Red Tiger, 15 Dragon Pearls and Buddha Fortune: Hold and Win by Booongo, only to switch to Quickspin’s ultra-popular Sticky Bandits Wild Return, Super 5 from Red Rake and so on.

Our tester even tried her luck on NetEnt’s Dead or Alive II, which seemed legit at the time of playing. It took her quite a while since depositing to spend the entire balance, unfortunately, without any luck.

We were determined to at least attempt a withdrawal and showcase how the casino handles the cashout process, so we hired another tester, JovanaV, asking her to deposit and get a chance to reach WR after topping up the newly created account with $100 on September 9th, 2021.

JovanaV has also finished the two-step sign up procedure without any hassle on September 9, 2021. It requires players to enter their personal data, upload verification documents and eventually subscribe to the newsletter. After completing this process, our player immediately jumped to verification.

She uploaded the documents (ID front and back) for KYC after opening her account.

Our second tester placed a €100 deposit with Vesper Casino after logging in at Skrill to complete the payment. Moments later, she received the code and concluded the transaction. JovanaV also rejected the introductory offer.

She then uploaded her Skrill proof of deposit to complete the required documentation.

Ready to give her best shot, JovanaV selected Microgaming slots to complete the mandatory 3x playthrough requirement on straight deposits. 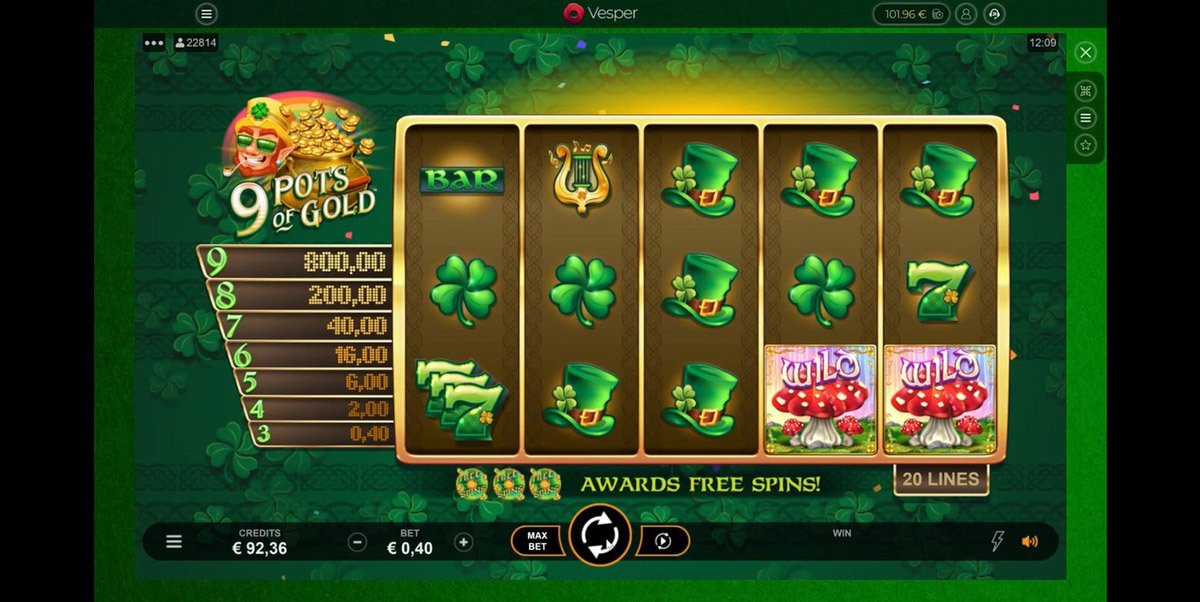 To tell you the truth, she was luckier with Lucky Koi, a title created by Spadegaming featuring 25 adjustable paylines. Finally, after giving a chance to Adelia, our second tester managed to meet the wagering.

To receive a payout, our player went to the cashier and submitted a request to withdraw €50 via Skrill - the same payment method used for depositing in both tests. Her next step was to upload documents for verification before cashing out. 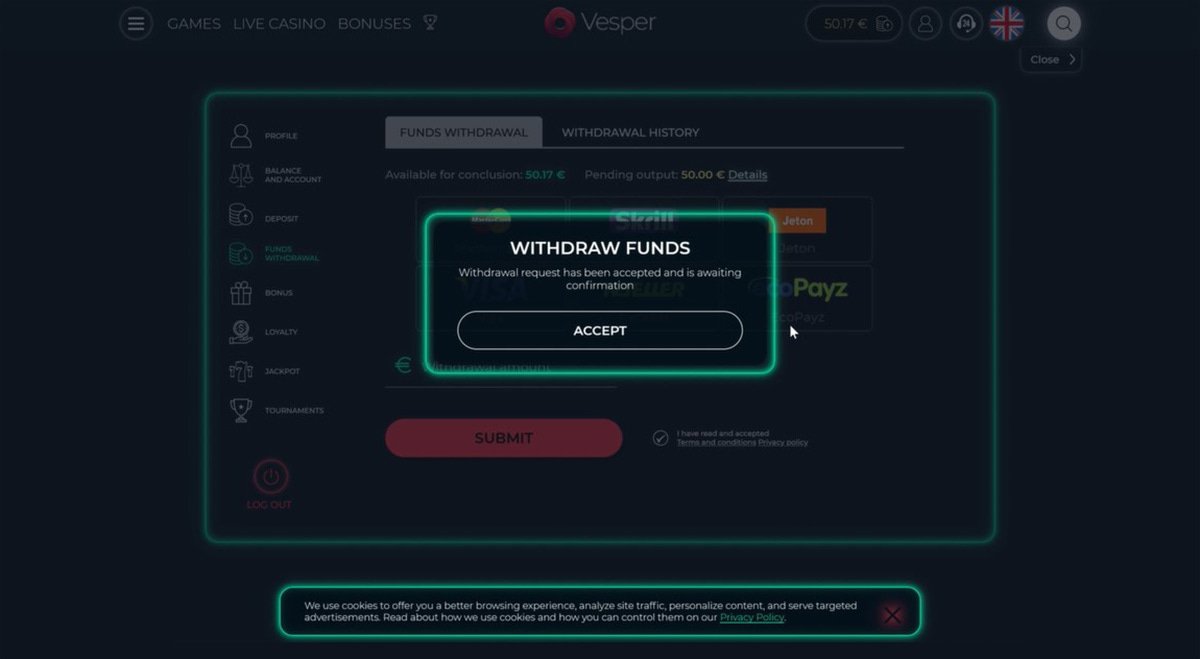 The withdrawal occurred on September 17th, 2021 and it was confirmed via email by Skrill, as shown below. The tester received EUR 48.5, after a EUR 1.5 was deducted from the requested sum of EUR 50). Even though JovanaV never received an email from the casino, confirming that her account was successfully verified, we suppose that it had been validated at some point prior to approving the withdrawal.

Keep in mind that Vesper Casino is still troubled by our warning label due to unresponsiveness and is still on probation. Also, please let us know in the comments below what your opinion is about this place.

Stay tuned for more reports coming soon and thank you for supporting our project “From the Players, For the Players”.

“We were determined to at least attempt a withdrawal”

Firstly, there should be no wagering requirement on straight deposits as per my humble opinion :) Secondly, once caught with pirated software, we shouldn't trust them at all. Finally, so many complaints unresolved keep their position insecure and untrustworthy.

Thanks LCB for this test, I think Vesper Casino needs to go a long way until it becomes a trusted casino

Thanks for doing the test, even with no problems for verification and withdrawal I would still not try my luck at venues that were found hosting fake games.

After hosting pirated games, they are not a brand we should trust. Their management promised they'd take over and resolve all complaints about slow payouts but they never actually helped us. It's a shame they got a chance to be removed from the Warning list. It's a great report.

In my opinion, they are still shady and I don't trust them. Hope they will sort out those complaints in the future, until then, it's a no from me. Thank you LCB for the reports!