From the Players, for the Players Goes Through 15 Exhausting Days at Tournaverse Casino for a EUR 50 Withdrawal 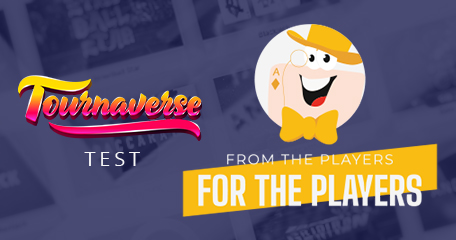 KYC Very Slow Due to the ‘Wrong Format’ of Documents

During August, we’ve picked several online casinos and tried to bring you the best the iGaming industry has to offer. Among these brands are Alf, Chumba, BOKA, Cadoola, JeffBet, Casino Max and some others, each specific in its own way.

Our idea to bring more value to the players (within the From the Players, for the Players project) continues with Tournaverse Casino this time. This is a powerful gaming arena dedicated to tournaments and grandiose entertainment in the style of Las Vegas.

Just like with Slots n’Play Casino, we asked our long-standing tester, Punakontti, to do the honors once again and put Tournaverse Casino to the test.

The idea was to sign up, make a deposit, go through KYC, play some slots, and withdraw real money, just like in every other test. Nonetheless, before we go into more details, here’s a short recap so you can know what to expect:

The biggest headache for our player during this test was KYC and poor customer support. Let’s see why it took him so much time to complete the verification and get his hands on the money.

To start the test at Tournaverse Casino, Punakontti had to open an account first. This occurred on Tuesday, August 2nd 2022 when our player completed the registration process in two simple steps – by creating a new profile and updating his data once signed up. 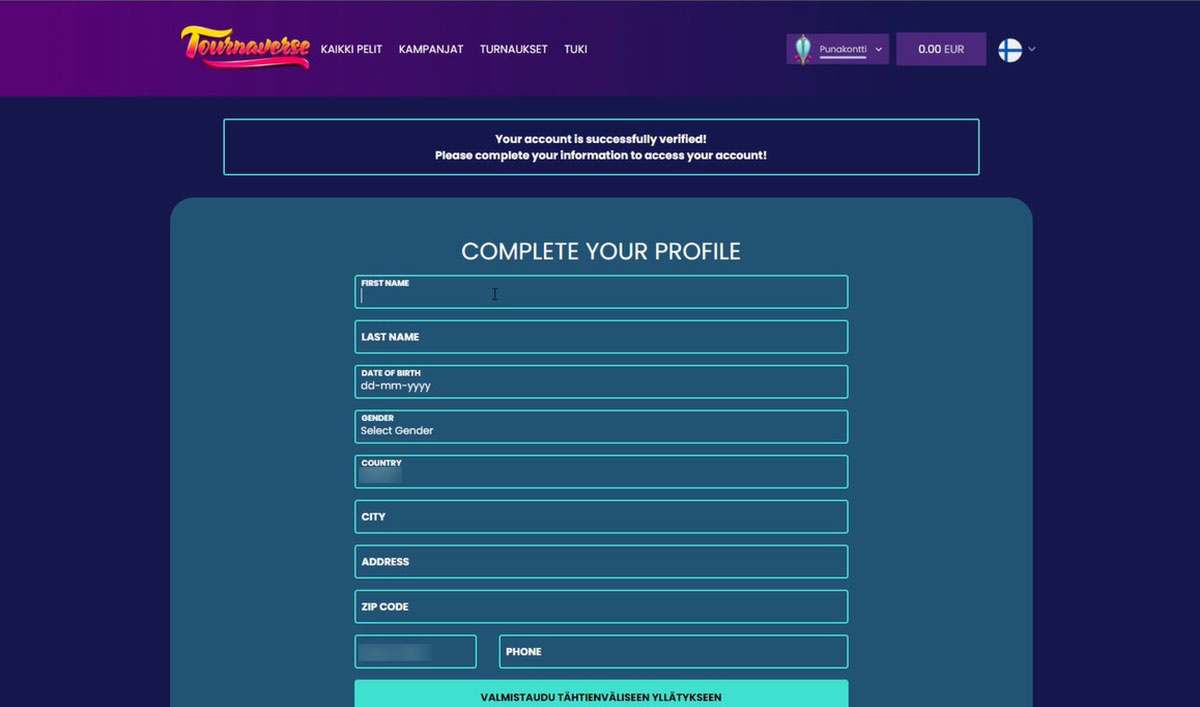 Punakontti soon received a welcome message per email from the casino and was ready to proceed with the test.

To give his newly opened account at Tournaverse Casino some juice and purpose, our player hit the cashier and selected Skrill as his banking method of choice to transfer EUR 185.00 to the balance. This happened on the same day as registering, Tuesday, 2nd August.

His transaction was quick and complete within a minute. 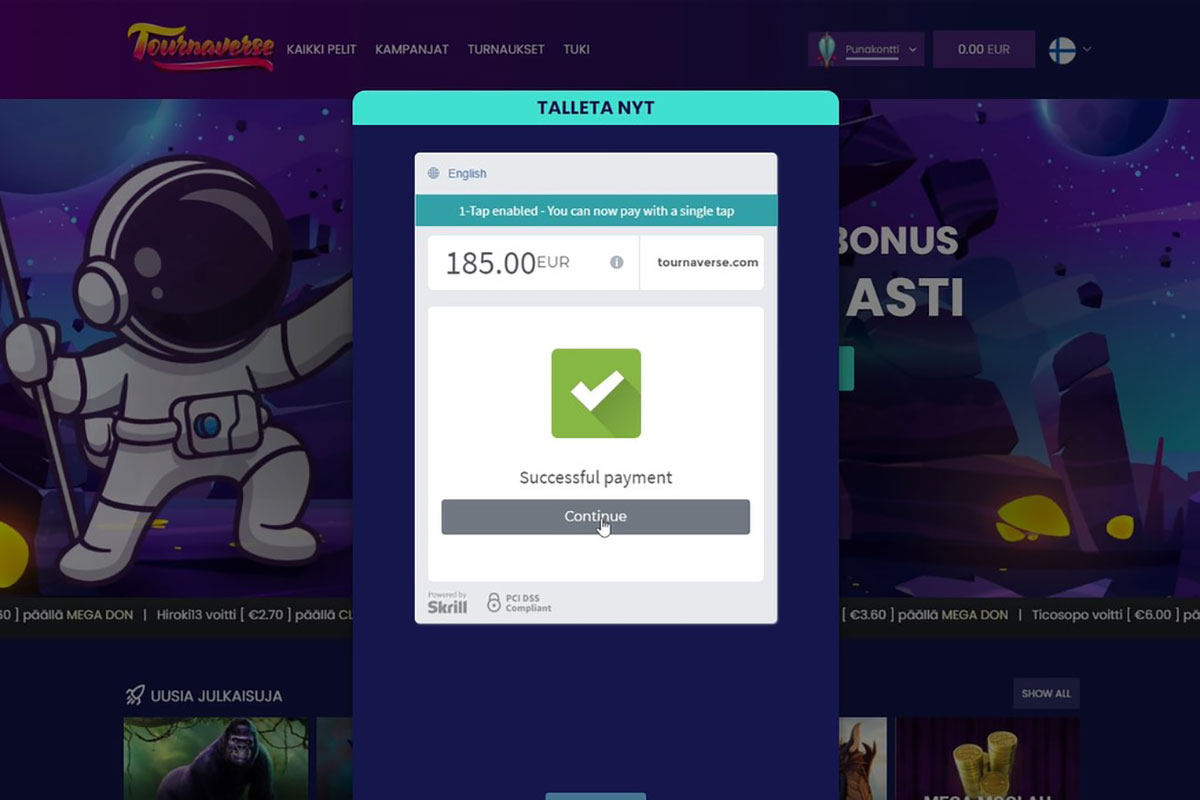 Players are also offered the welcome bonus upon registering, but since it’s not part of our gaming and testing experience, we kindly asked Punakontti to refuse it.

This is how the history of transactions looks like once you transfer some money: 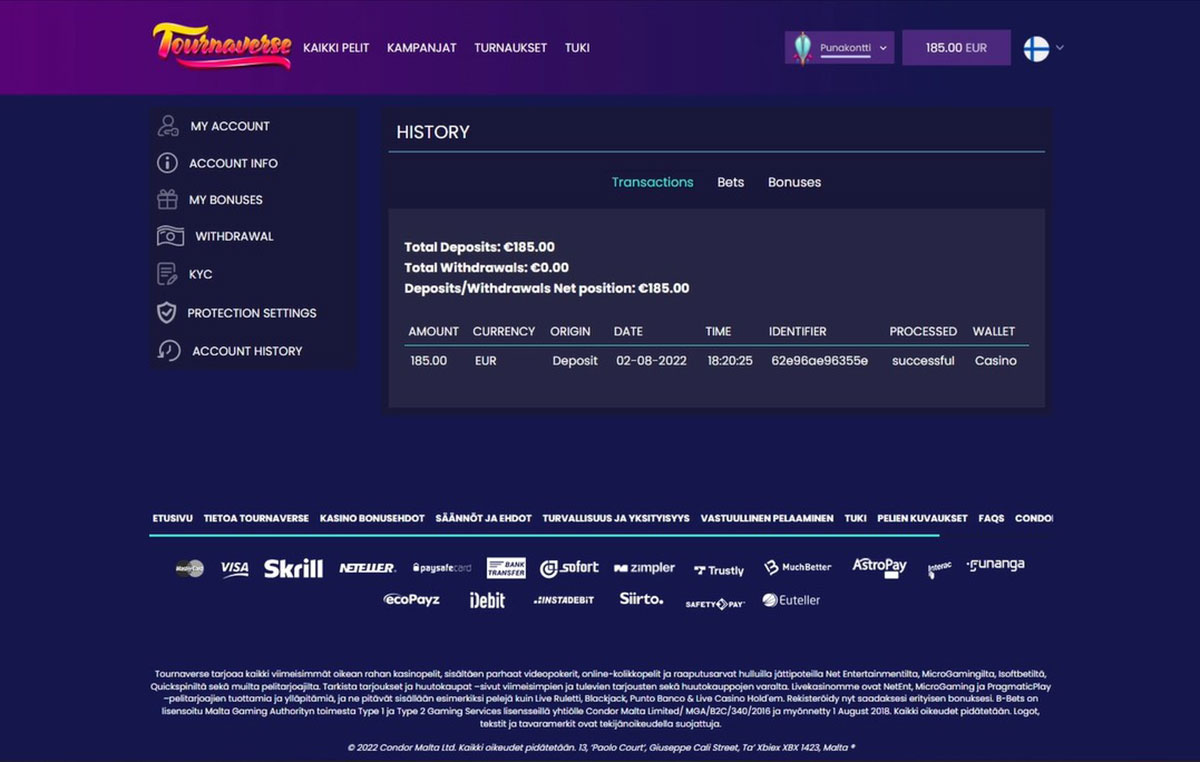 If you want to learn how to use Skrill for deposits at online casinos for players from Finland, make sure to watch our video tutorial.

Old habits die hard, they say. Our tester picked Bonanza as his first game at Tournaverse Casino but it failed to load out of some reason. By the way, Punakontti started his gaming session on the same day as registering and depositing, Tuesday, August the 2nd.

He immediately stepped from shallow waters into the depths of Mega Don, a July edition from Play’n GO full of symbol upgrades, bonus spins, 1024 ways to win and a maximum win of 10,000x the bet. 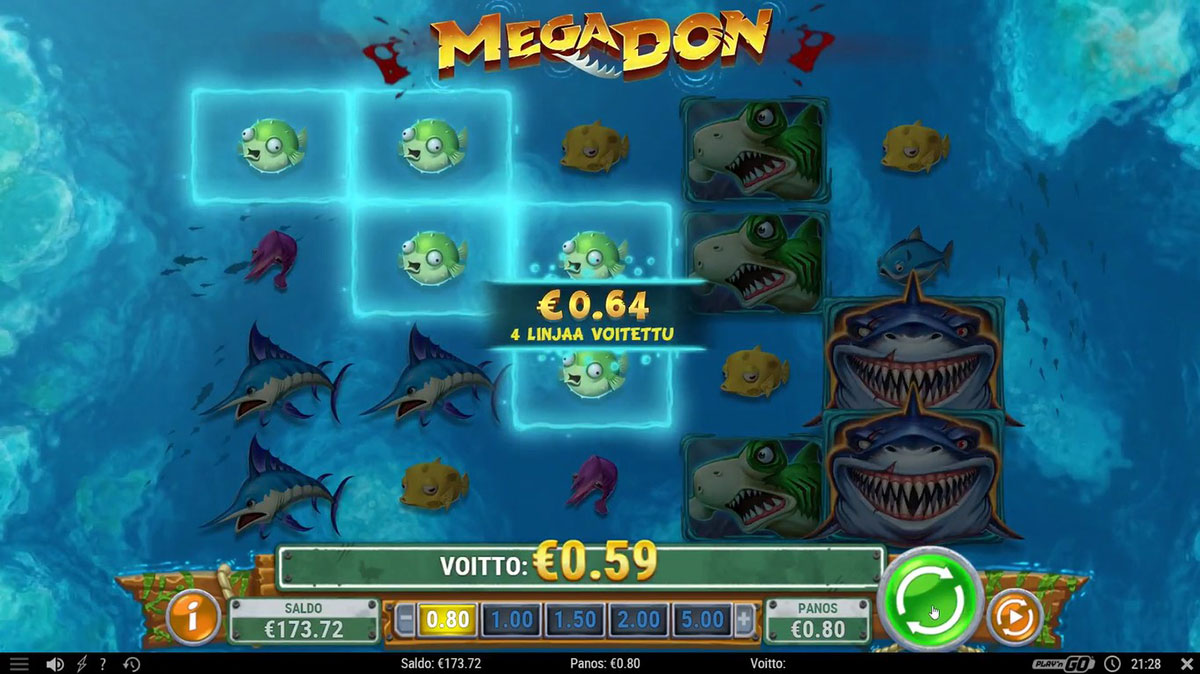 After losing around €15 on that game, our tester went for something more challenging. His next pick was Rich Wilde and the Book of Dead,  a timeless hit from the same studio. Unfortunately, he kept losing money, but made one cool win of 2160 credits during free spins. 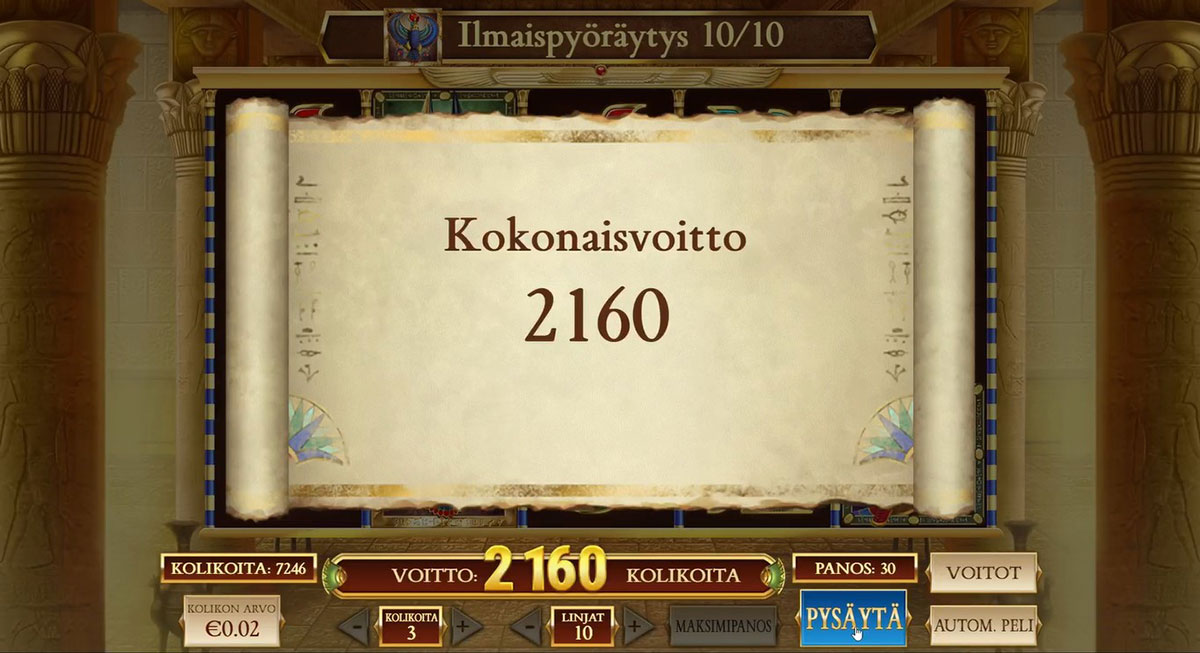 His next choice was Perfect Gems,  where he managed to keep his saldo almost intact. He even made a nice win of €18.60 at one point but stopped playing at €150.12. 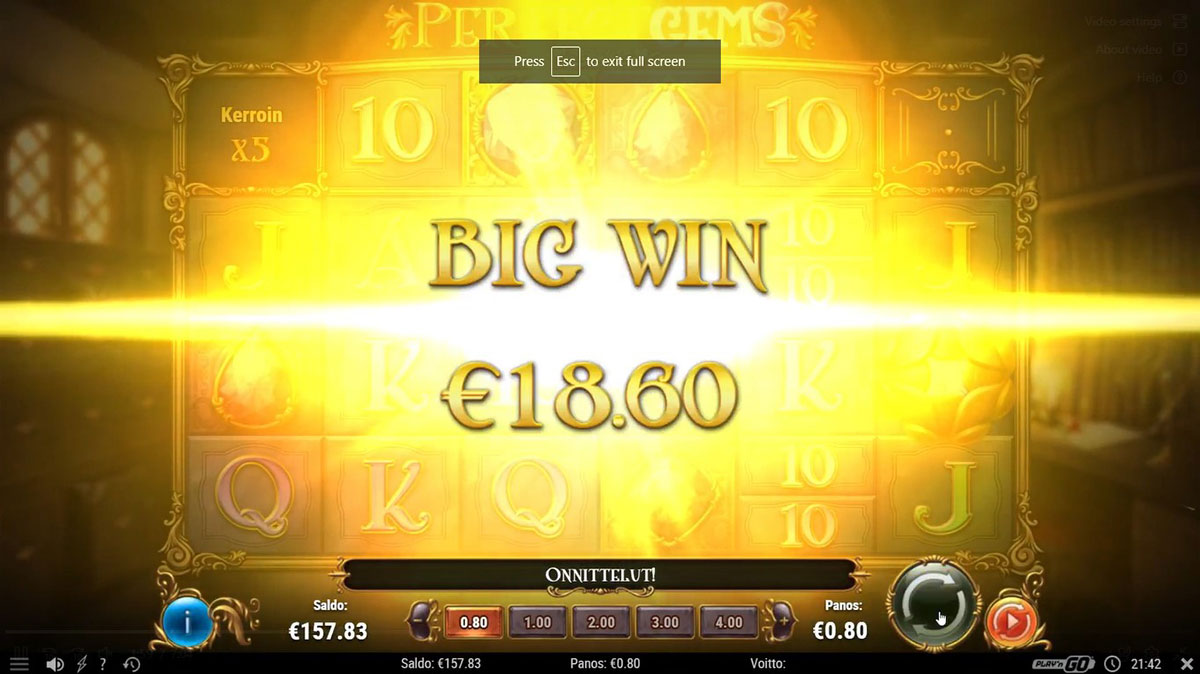 Just to make sure that BTG is still available in Finland, our player reached out to the live chat support and asked if there are any specific problems on deck. The answer was more than clear – some content is not enabled in certain regions. 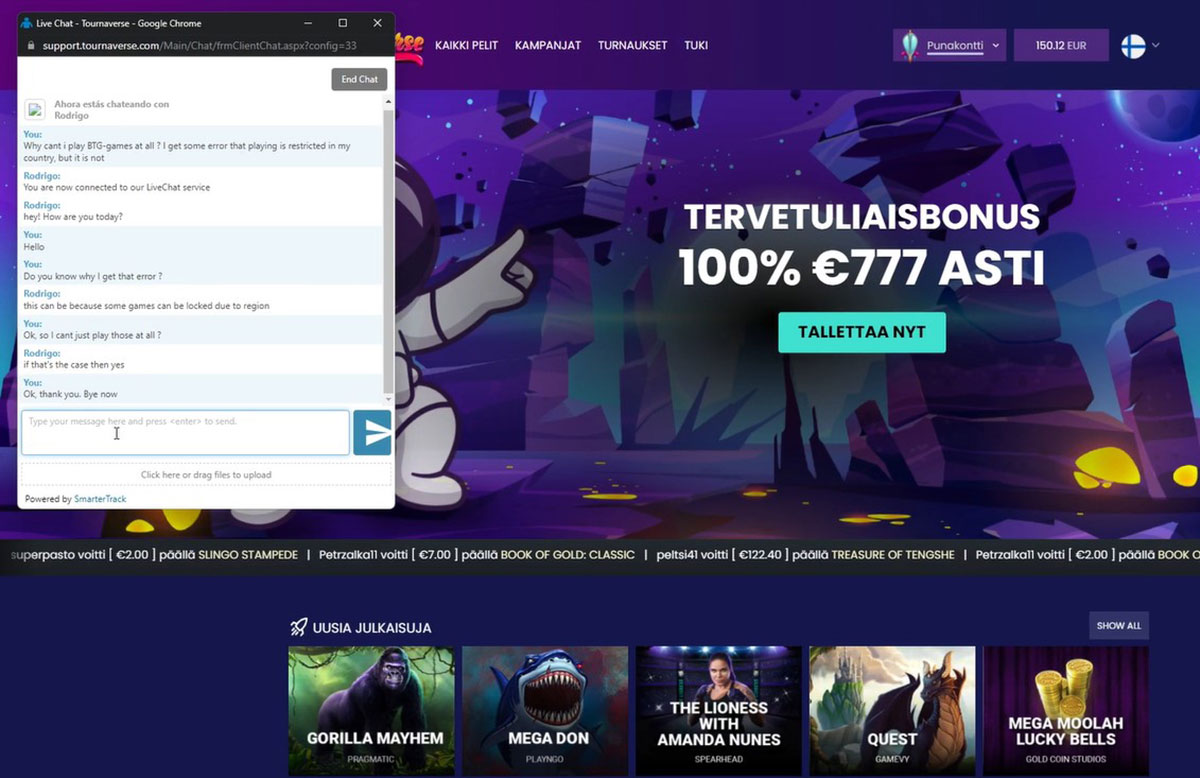 His balance kept declining until it reached the minimum withdrawal amount of EUR 50. This is where Punakontti decided to verify his account and hopefully speed up the cashout process.

Our player from Finland tried to verify his account on several occasions. It includes 5 steps: proof of identity, address verification, bank statement, proof of deposit, and a questionnaire.

The first time was on Thursday, August 4th when Punakontti uploaded a passport screenshot, utility bill, Skrill statement and deposit details. For some reason, the KYC system could not accept our tester’s documents due to the ‘wrong format’. Punakontti asked a customer support agent to help him, but he advised our player to send all docs via email.

Interestingly, even though all verification documents were in .jpg format, the system somehow couldn’t recognize them. 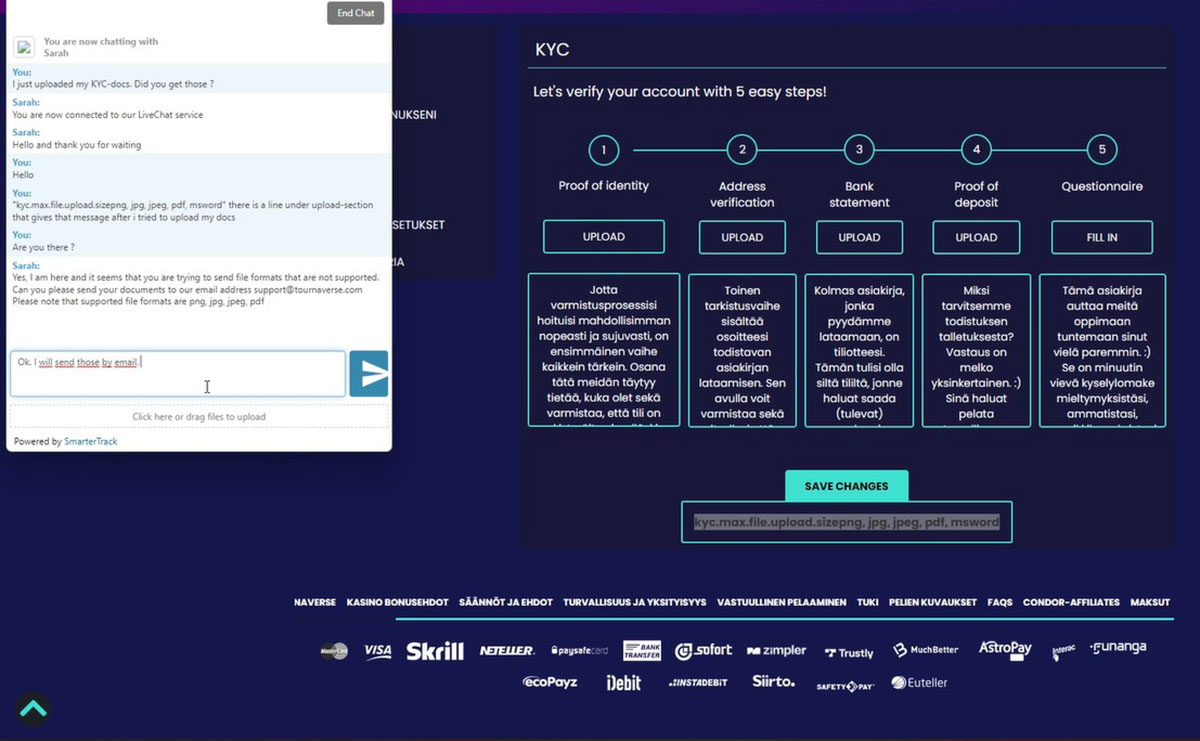 Punakontti had to send more documents on Saturday, August 6th because his Skrill screenshot and bank details were ‘not good enough’. The casino also required documents to be sent to a new email address. 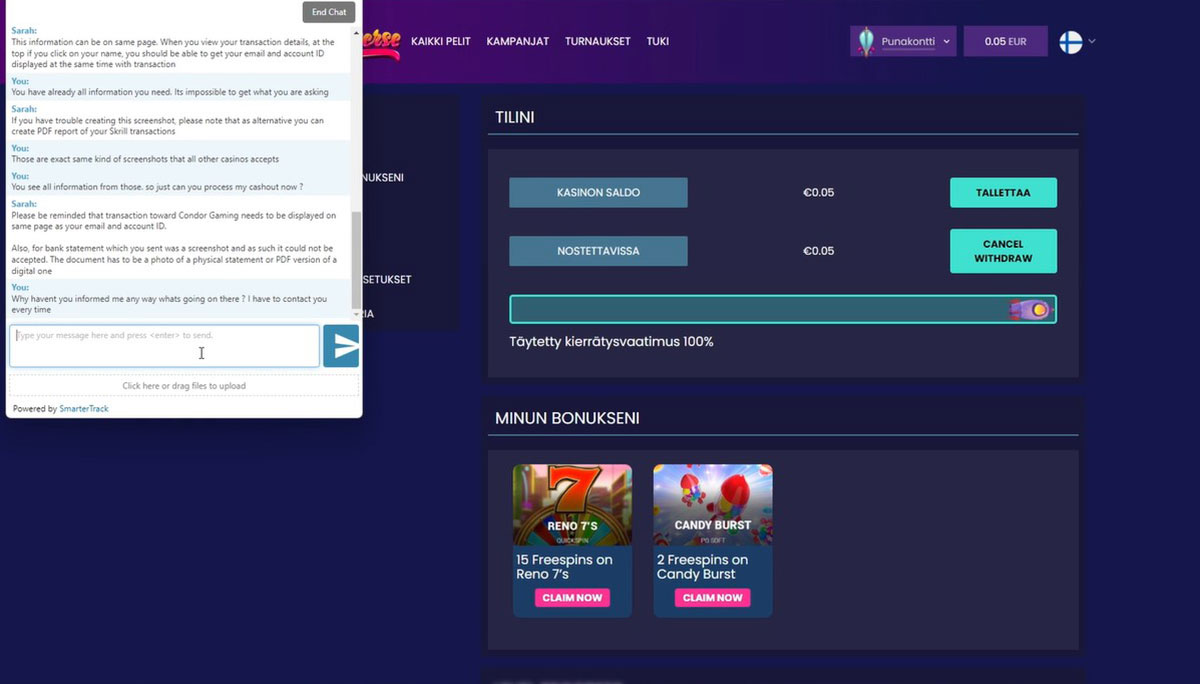 Then, on Friday, August 12th, our player had to send the same documents in another format. Bank statement too, even though he never used this method for depositing. After complying with the casino’s KYC rules, he received an email that his documents are finally being processed.

On Tuesday, August 16th Punakontti finally got an email that the verification process is complete and that his cashout will be completed. 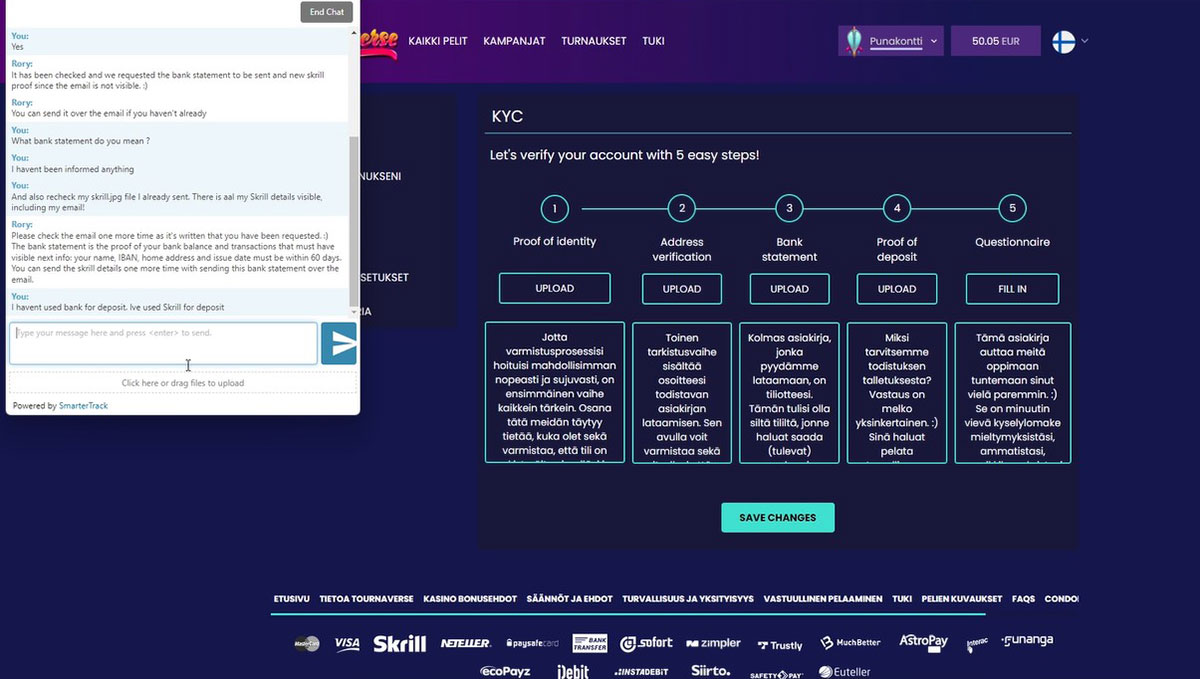 Unfortunately, our tester was not satisfied with the casino’s customer support due to its poor service during the KYC process. On top of that, there was also a total lack of communication from their end, huge delays and his constant initiative via chat to find out what was going on. The customer support didn’t even answer our tester’s email about the status of KYC.

Punakontti’s first withdrawal attempt to collect his remaining balance (€ 50.00) occurred on Saturday, 6th August. Due to the problems with KYC, our player could not cash out the remaining saldo from his account until Tuesday, August 16th. 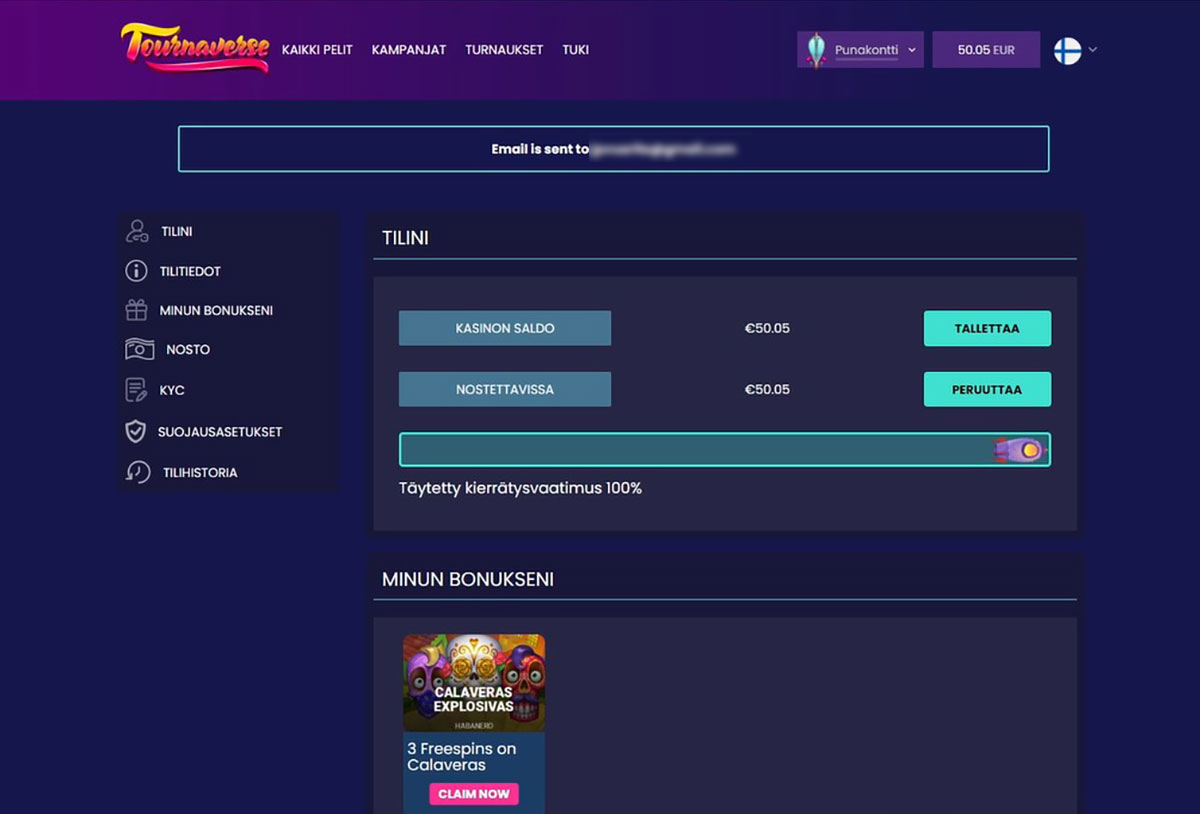 Punakontti finally received the minimum withdrawal amount of EUR 50 via bank transfer on Wednesday, August 17th. Since the bank transfer was his only option to cashout, his money appeared in his bank account after two more days, on Friday, August 19th. 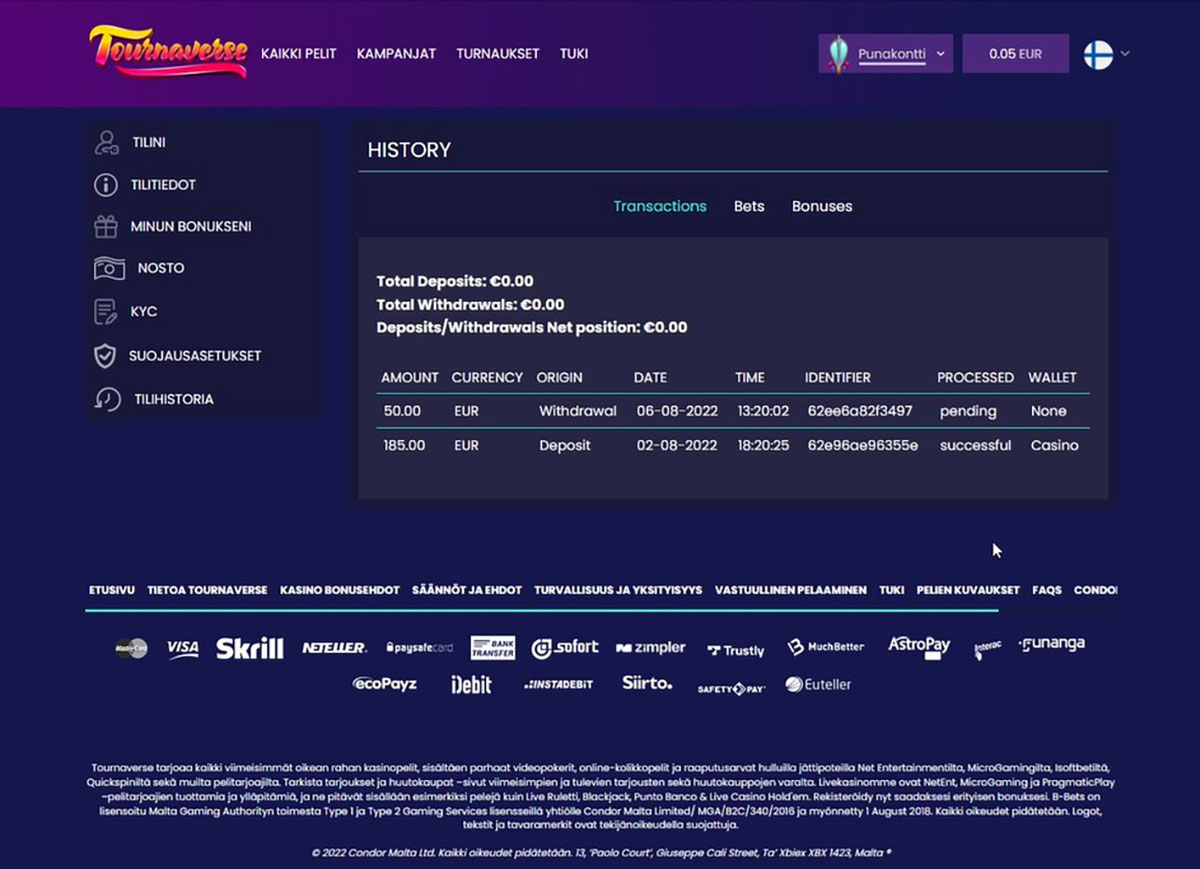 According to the terms and conditions, the processing times at this place are maximum 48 hours following the player’s request to withdraw. The minimum permitted amount to withdraw is EUR 20.

Tournaverse can decide at its own standards if the maximum amount per player will exceed €5,000 per month. All amounts larger than this figure are paid in terms decided by Tournaverse.

If we exclude all problems with the KYC procedure, Tournaverse might seem like a legit choice. Registering is quick, depositing too, playing games is smooth, but KYC needs to be improved!

The withdrawal process was also fast, but it took a lot longer than needed. Our player followed the same procedure as always, and his documents were in the same format as with all other previous tests.

Take care and play responsibly – we will be back with new tests soon!

The KYC procedure complicated things a bit, which is understandable, but everything turned out well in the end. Thanks for this report.

Good job! Thanks for this LCB report. The information written in this report, especially about the withdrawal process and the KYC procedure, is important for our members.