From the Players, for the Players Makes a Five-Finger Exercise at Vulkan Vegas and Calls it a Day with a EUR 50 Withdrawal 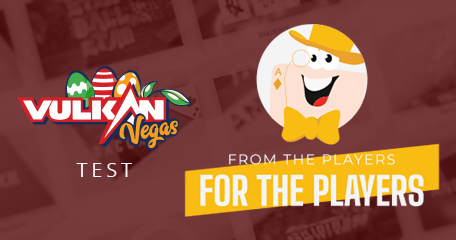 Sometimes Even Three Comebacks Just Won’t Do the Trick

As we part with the third month in 2022 and mark another successful phase of testing (we tested Lapilanders, Parimatchwin, Biamo, BetUS, EveryGame and Yebo Casino among others), our heavyweight project, “From the Players, for the Players”, hits new heights in April with two upcoming test reports – performed to deliver crisp and valid information about depositing, playing, verifying and withdrawing policies at online gaming platforms on LCB.

This month, we shared some cool facts about the overall gaming experience at Mango, Fansbet, and Lion Slots, three iGaming platforms that only recently joined our roster. We hope that you’re satisfied with the results, in case one of these brands has caught your eye.

However, there is one more casino worth mentioning from March called Vulkan Vegas, and to see whether its terms and service meet our standards, we asked a new tester from Finland, Punakontti, to swing into action and see whether joining the platform is really worth anybody’s time.

Before we unwrap the entire test, a quick recap:

Taking that into account, let’s see from a broader perspective how the whole test went and help you make a judgement before signing up.

Punakontti began registering with Vulkan Vegas on Wednesday, 23rd March 2022. To open an account, he had to provide an email, create a password and choose currency. 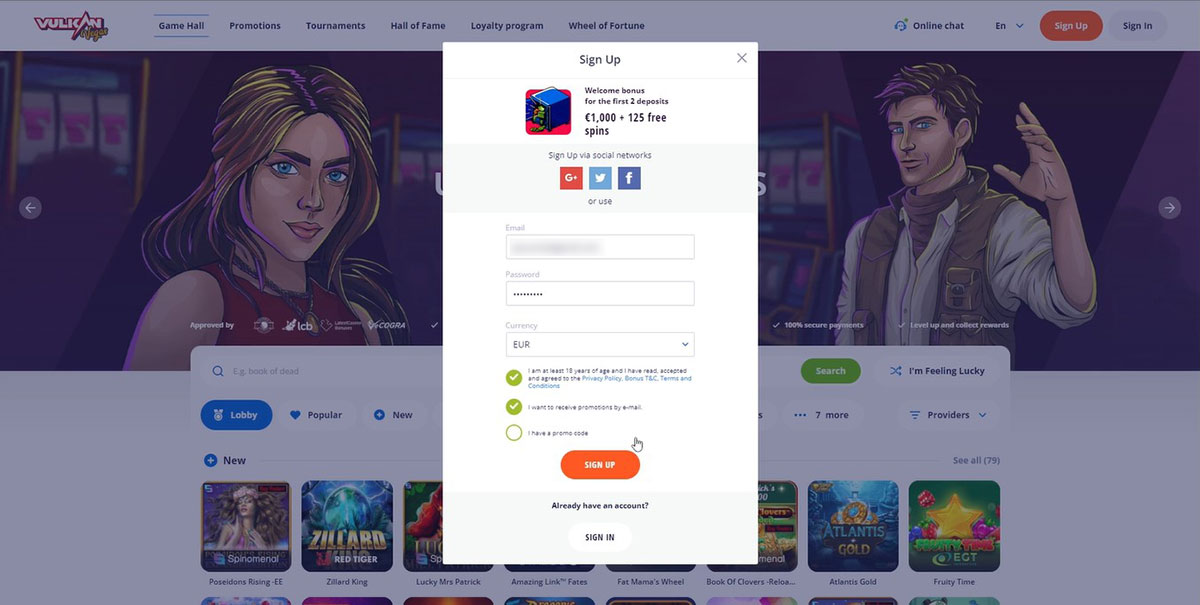 After accepting the terms and conditions, our tester confirmed his email and jumped straight to KYC verification, which requires from each player a proof of identity, proof of address, proof of deposit, a selfie with ID/passport and payment screenshots.

To confirm his identity and verify his newly opened account with the operator, our tester started uploading a photo ID (front and back), utility bill, and proof of payment (E-Wallet) on March 23rd. 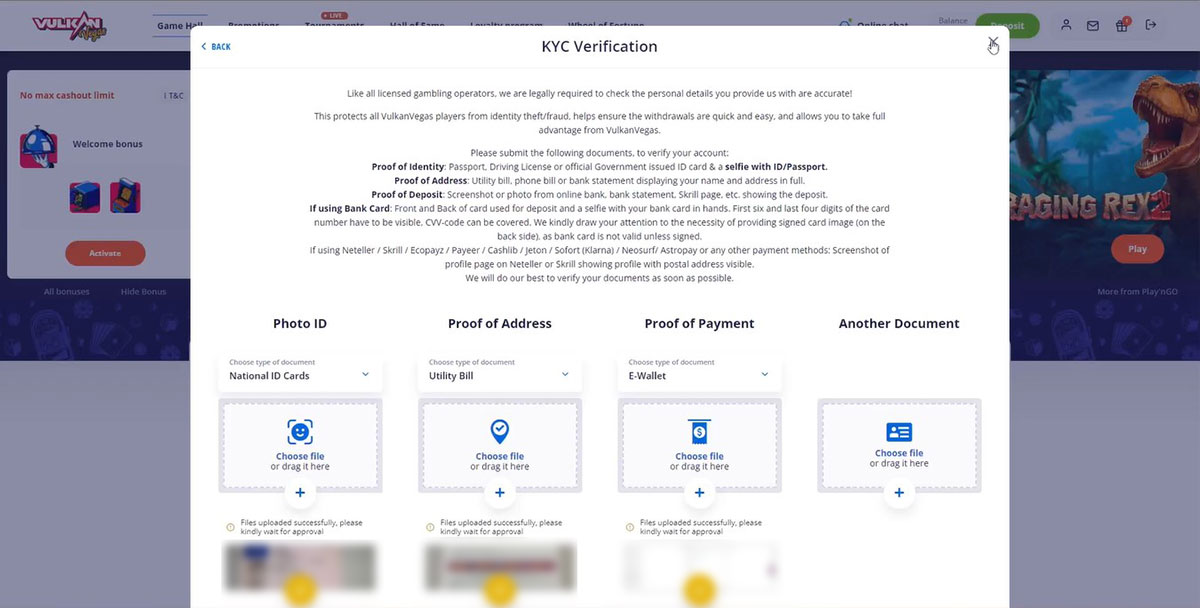 An hour later, Punakontti received an email from the casino stating “KYC check complete”. As a final step, though, our tester was also required to upload a selfie with his personal ID a day later, on March 24th.

Now, let’s see how long it took to place a deposit!

There are around 16 different ways to fund your account at Vulkan Vegas Casino. Our tester opted for the most common payment method at online casinos – Skrill.

Depositing a minimum or maximum at this place is subject to certain rules.

While placing a minimum deposit is only €/$10 per transaction, every amount that exceeds one thousand Dollars (USD 1,000) will require a player identification procedure, including a copy or a digital photograph of identification documents, such as the Passport or an ID card.

Our tester funded his account with €182 via Skrill on Wednesday, March 23rd 2022 in just a few steps.

The deposit was also confirmed in a matter of seconds via email:

If you don’t have experience with Skrill but would like to know how to use it as a payment method at online casinos, have a look at our tutorial after reading our test report:

When it comes to Punakontti’s choices in regard to gaming, he started exploring the lobby with Nolimit City and its hit title from March 2021, Fire in the Hole xBomb. After a few minor wins, he switched to a different supplier, Relax Gaming, but the studio’s iGaming content is unfortunately not available in his location. 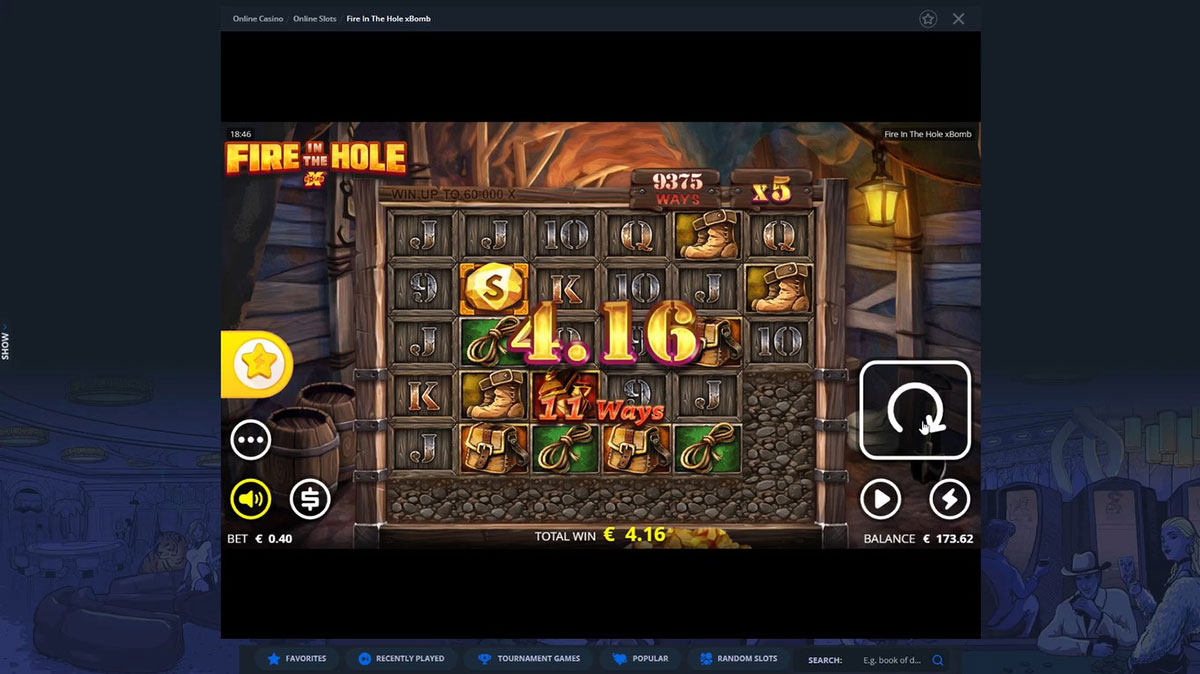 The second-best option was Thunderkick and the second sequel in its Gemma series, called Crystal Quest: Arcane Tower. His highest win since the beginning occurred during free spins, but it only amounted €26.90. 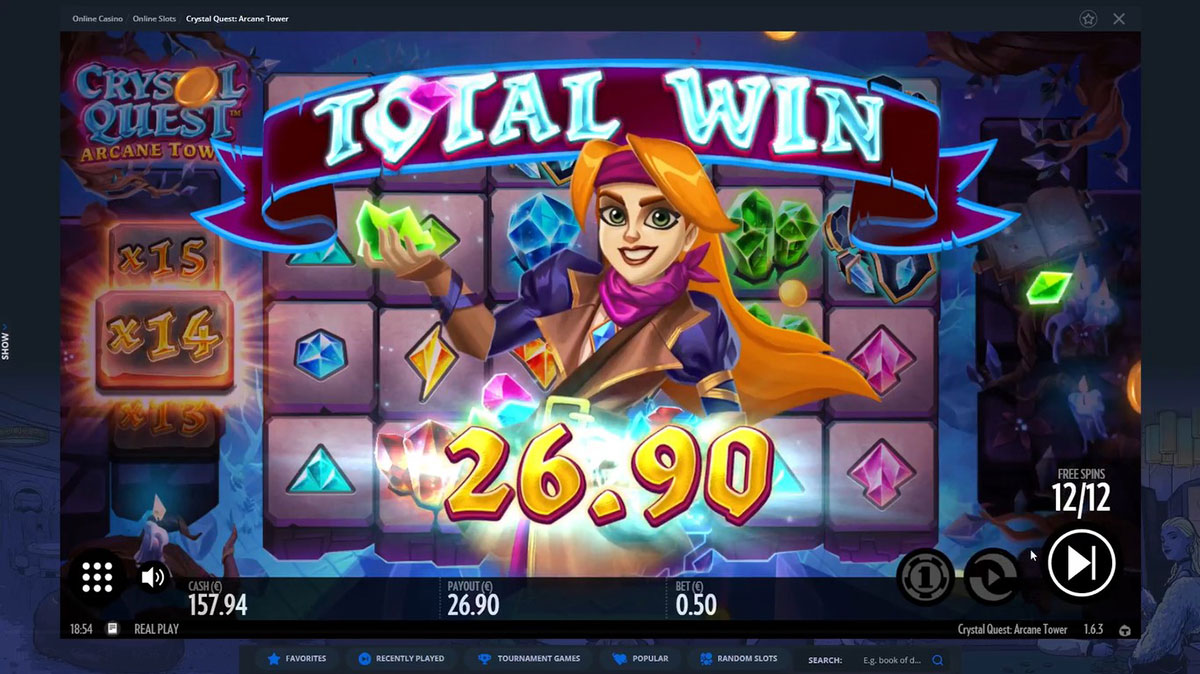 Since Punakontti’s balance was back at the beginning, he decided to go the distance with Megaways slots and chose Tyrant King from iSoftBet, but no luck there either.

The biggest win occurred during Crystal Quest: Deep Jungle, when our player hit €103.65 after 17 free spins. 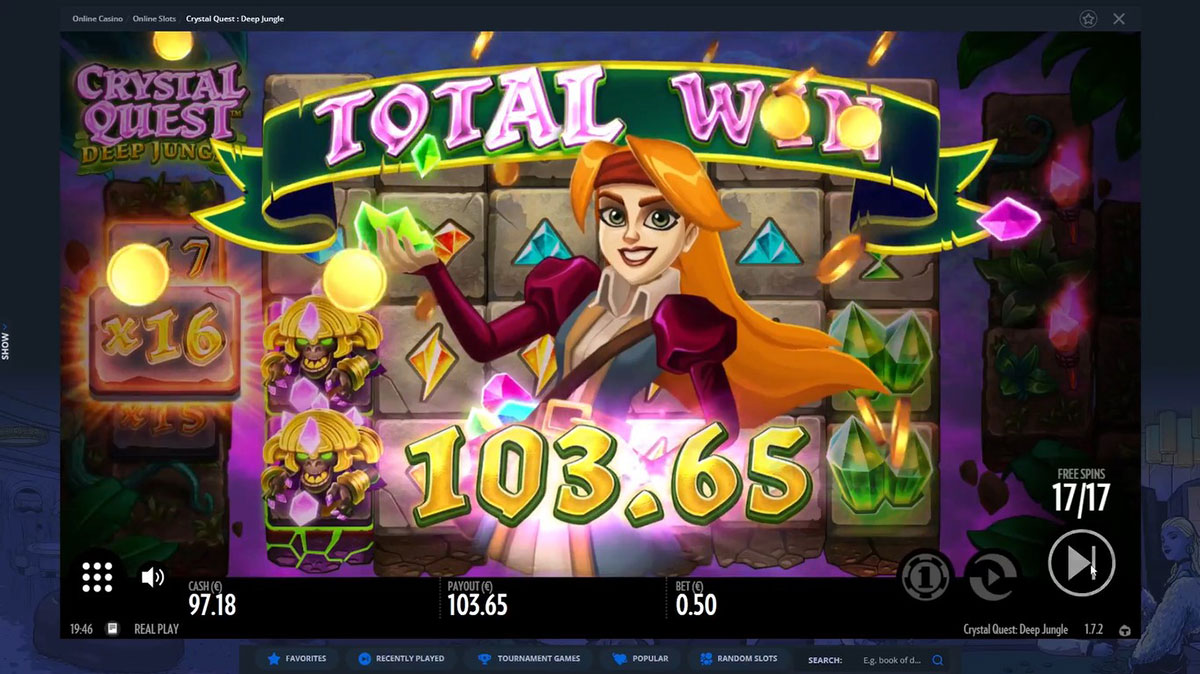 Despite the fact that our tester managed to get back on his feet three times and strike solid wins up to €100 or so, he had to call it quits while playing Xpander by Hacksaw Gaming, since his balance dropped down to €50.32. 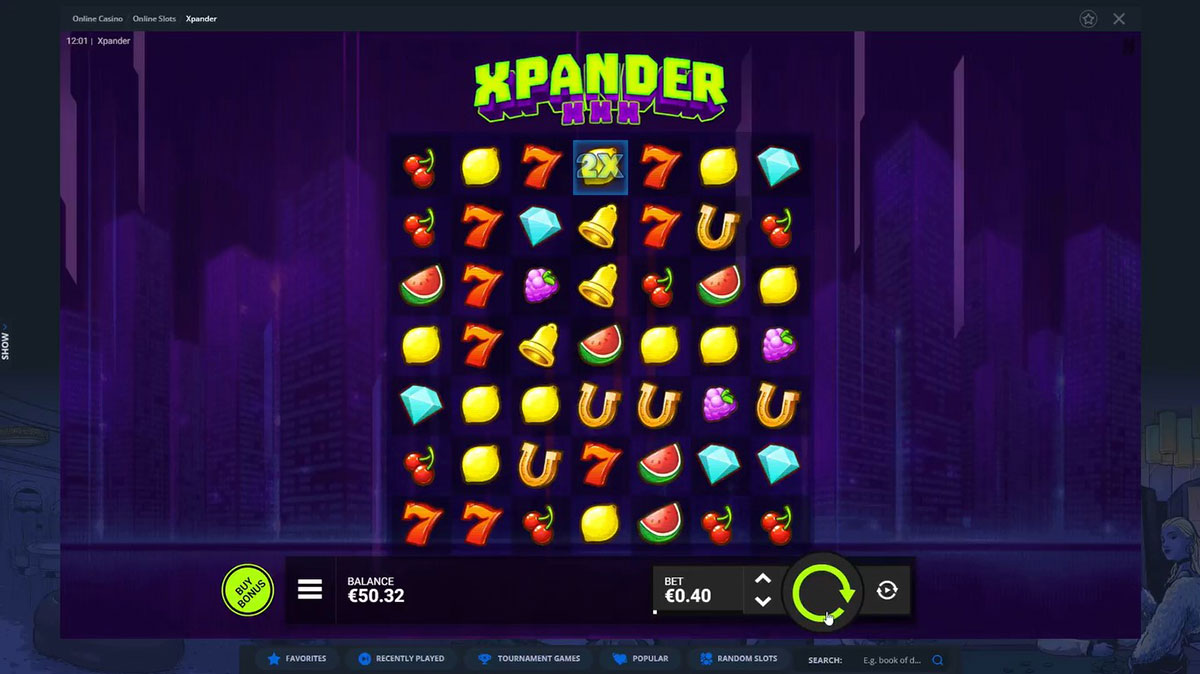 The minimum amount for cashing out, according to the information from a live chat agent, is €45 to a bank card, €50 via bank transfer and €10 for E-Wallets. The maximum withdrawal amount is EUR 30,000 and it is approved by the casino within the period of 5 minutes up to 96 hours, and paid out within 30 working days from the day of request. 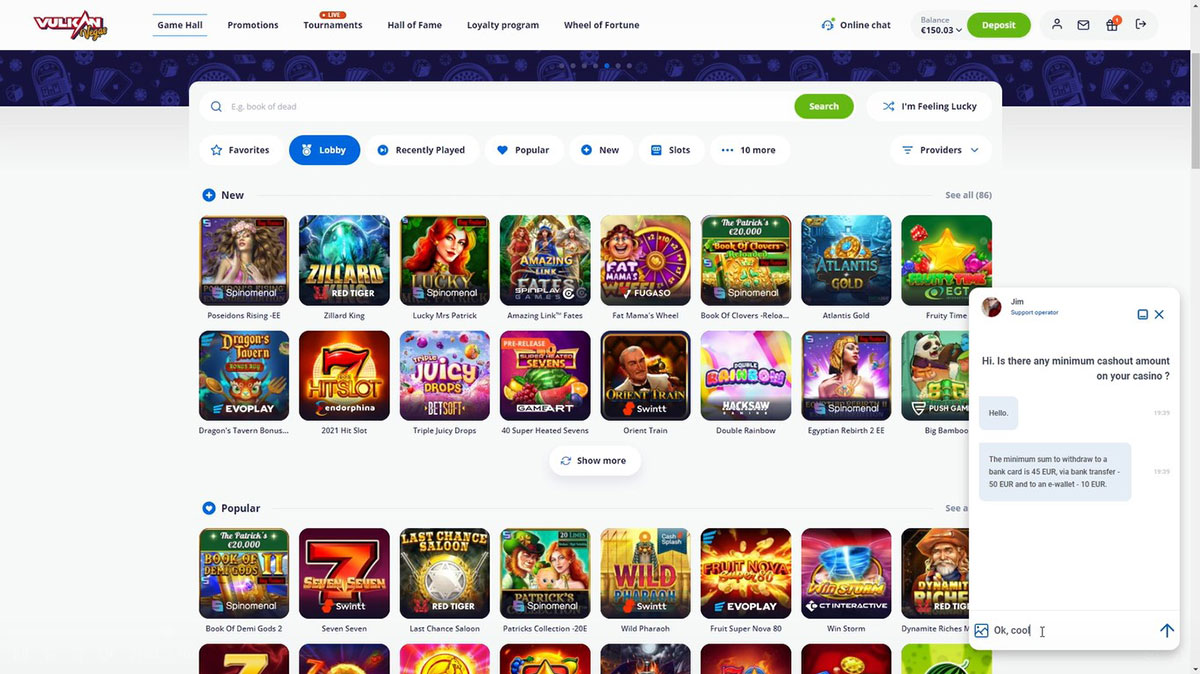 Punakontti’s withdrawal request of €50 was submitted on Sunday, March 27th, 2022. 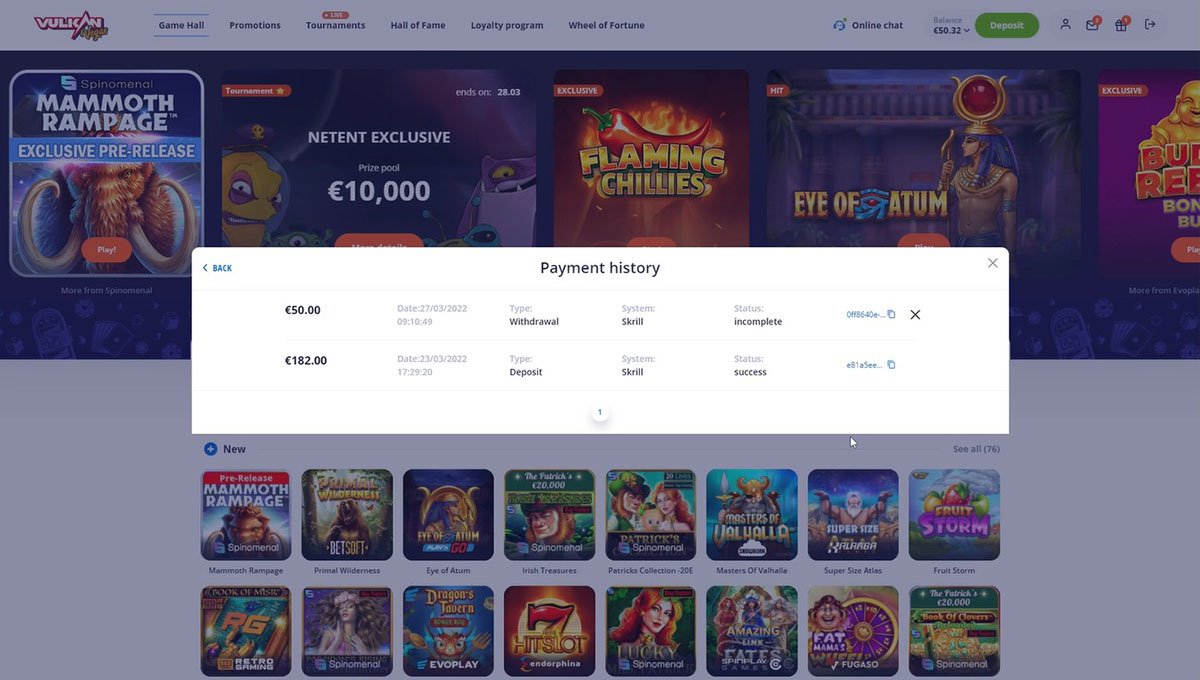 His payout was received and confirmed on the same day via email.

As you can see, the standard procedure of registering, verifying, depositing, playing and making a withdrawal at Vulkan Vegas Casino went smooth and without any hassle.

Our tester’s experience with this iGaming platform lasted from Wednesday, March 23rd 2022 until Sunday, March 27th 2022 when he received a confirmation about the full withdrawal.

We hope that Punakontti’s test results exceed your expectations and help you form an objective opinion about the brand before registering.

Until next time, play responsibly – our project, From the Players, for the Players, will be back soon with a lot of new comprehensive test reports!

“we asked a new tester from Finland, Punakontti, to swing into action”

Glad this test turned out good, cause I was really hoping it does! Thanks for the report!

LCB's project "From the Players, for the Players" is proving to be very useful. Seeing a test like this, that proves what withdrawals are really like, is surely going to help many players with choosing their casinos. Yet another great test done, good job Punakontti and good job LCB! Keep at it!

I was reading the members' comments on the LCB's Vulkan Vegas review page and there were some stating that the payout is usually quick. The tester proved this. I am glad these reports exist :) Good job again :)

Another great test for LCB, this is how every Casino experience should look like. I hope Vulkan Vegas will continue with such business practice, nice job for them.

Great job Punakontti and LCB! Glad to hear everything went smoothly without any obstacles! Thanks for another casino tested and for a detailed report.

I played in this casino and never have some withdraw problem.Nice review

Making a smooth as butter withdrawal is always incredibly satisfying