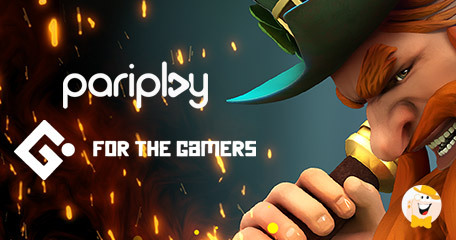 Continuing to expand its catalog with supreme quality online casino games, Aspire Global’s Pariplay Ltd announces another excellent addition to its burgeoning portfolio. By entering a distribution partnership with G. Games, the platform provider reinforced its offering with more than 150 fun-filled titles.

The most recent agreement is just one of the many successes the company has had over the past few months. Its in-house studio received approval for the recently-launched Ontario iGaming market and also went live in New Jersey.

Taking Entertainment to the Next Level

Following the closure of the deal, Pariplay’s Fusion® platform welcomed some of the most enticing games delivered by the creative team. Cheeky Fruits Deluxe, Elite of Evil, Clover Rainbow Deluxe, and Psycho Candies along with table game classics such as Blackjack, Roulette, and Solitaire were all added to the catalog.

“We are delighted to be working with Pariplay, one of the first companies we spoke to when we started out on our journey and who have always been generous with advice and support. It’s lovely to now be formal partners working together to deliver great content to players across the world.”

Pariplay’s Callum Harris referred to the agreement as a “perfect fit”. As he clarified, the entire team gathered in this inventive studio is committed to delivering innovations and a stellar gaming experience, which is precisely what Pariplay is focused on as well.

Striving to make its products appealing to each and every type of consumer, G Games develops classic slots, games with clusters, big prizes, and many more. Aside from digital one-armed bandits, the provider is also involved in crafting table games and lotto, including Bingo, Keno, and Scratch cards.

Rapid Expansion All Over the Globe

Continuing to spread its presence across the United States, one of the fastest-growing iGaming regions, Pariplay received approval to offer its products to Michigan players. Just to remind, this certification is not the first US approval for the company, as it already runs the business in West Virginia and New Jersey.

…the platform provider itself as well as its in-house studio Wizard Games, unveiled in November 2021, received a license to offer its products and services to Ontarian players. Furthermore, the company signed an agreement with Switzerland’s Grand Casino Bern to integrate its games into 7 Melons casino.

Aside from geographical expansion, the Pariplay has penned multiple strategic deals with the most renowned developers in the industry. The very beginning of the year brought alignment with Spearhead Studios, followed by the Scout Gaming Group deal, Soft2Bet integration, and Skillzzgaming partnership.

Also, the company expanded its Ignite roster with the Spinberry deal and joined forces with Mascot Gaming. The most recent collaborations were inked with Kalamba Games, White Hat Gaming, and LiveG24. At the time being, the wealthy platform displays over 12,000 releases provided by 80+ top-notch suppliers, with new ones being added on a regular basis.

It appears to be a wise business approach that will benefit both companies.