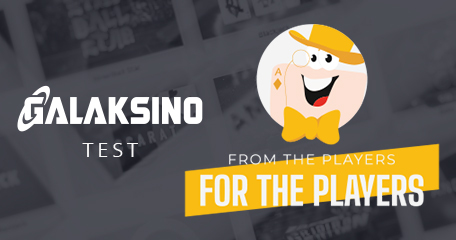 Is This a Must-Explore Galaxy for Finnish Players?

When selecting an online casino, players mostly inspect the game's portfolio and the selection of bonuses. Equally important as these two components is the availability of payment options, which is why we strive to test as many different methods as possible in our “From the Players, for the Players” project.

We have mostly investigated crypto and card transactions, but we have also explored some specific options limited to certain markets, such as Interac for Canada. This time, we tasked our tester from Finland to visit non-US-friendly Galaksino and see how efficient the Pay N Play operator is in handling Trustly deposits and withdrawals.

These are the milestone moments of our tester’s investigation:

Based on these highlights, it seems as if everything went with no issues. Was it really like that? Keep reading our comprehensive Galaksino test report and discover what was it like to deposit and withdraw in a Pay N Play casino!

Founded in 2019, Galaksino joined the industry eager to offer Finnish players the opportunity to check out the most popular online casino games without having to register. Running as a Pay N Play brand, this operator allows punters to verify via mobile phones, fund the account and start playing within a couple of minutes.

Teamed up with BTG, Microgaming, NetEnt, Pragmatic Play, Yggdrasil, Quickspin, and many other top-class studios, it displays the most colorful selection of releases. It also has a “WeSpin” corner, where punters can participate in the streaming sessions and experience games from a completely different perspective.

Plenty of promos are found on the platform as well, along with the opportunity to collect Star Points and redeem them in the Galaksino Store. Points are received when placing bets, completing mobile phone verification, making a deposit, and logging in daily.

Finally, it operates under the ComeOn Connect affiliate group, whose rapidly growing network gathers a plethora of top-ranked brands.

Having in mind that Galaksino belongs to Pay N Play online casinos, players can simply deposit and “Play without delay!” with no need to register. All he had to do was verify via phone, select the desired deposit amount and start playing.

Yet, exploring the official Terms, players may notice the following rule:

“2.1. In order to use the games and services offered by the company, a player must register in person and open an account known as a game account. Only one game account is allowed per player. The Company reserves the right not to accept any game account application.”

“1.7 The company reserves the right not to accept applications for registration without giving reasons.”

“1.8 The Company also reserves the right to close a gaming account without giving any reason.”

Worth adding is that Pay N Play online casinos usually don’t require customers to go through any KYC process. The operator simply relies on banking details available via the selected payment method. Our tester didn’t have to complete any sort of ID verification.

On April 26, 2022, the tester accessed Galaksino wanting to deposit EUR 185 via Trustly. He entered the desired amount of money and confirmed the payment, but some technical issues occurred. 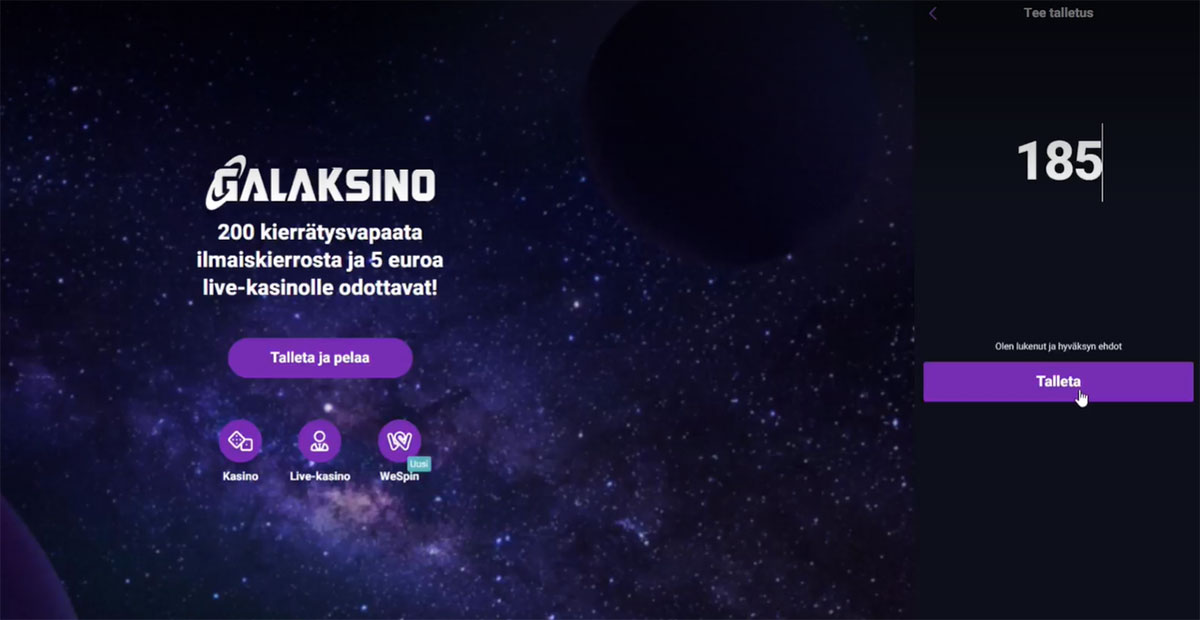 He attempted once again, this time via a different bank (but the same method), but the same error appeared. He turned to live chat to see what was going on. 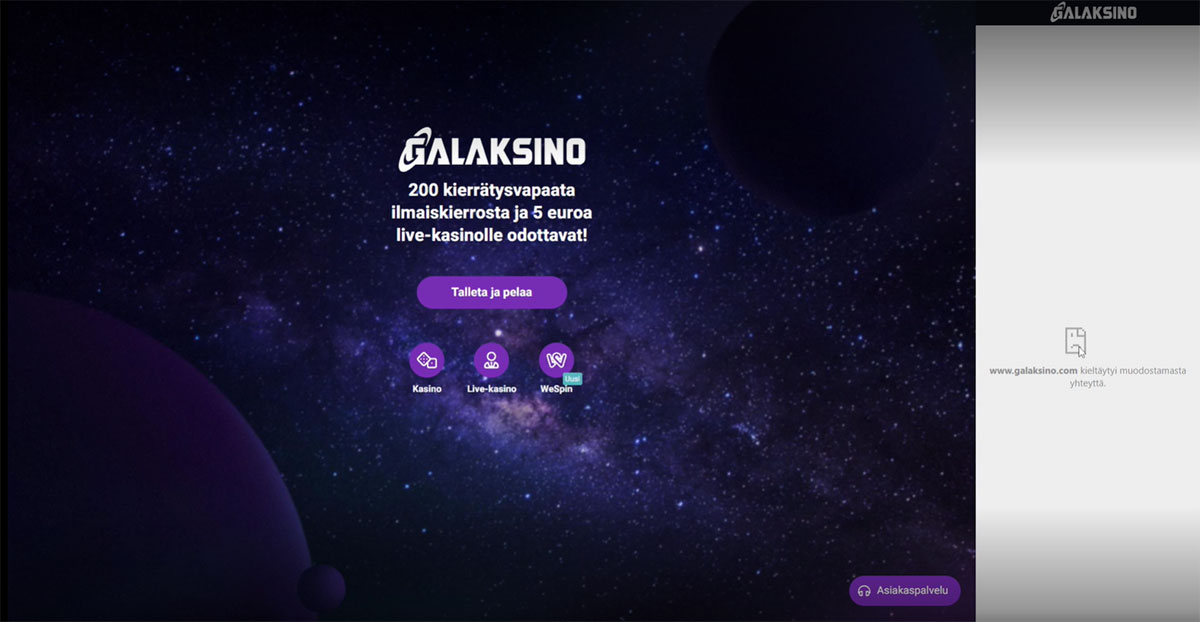 However, the next day, on April 27, 2022, when he accessed the platform, the tester noticed that his balance was displaying EUR 370. This meant that both of his attempts to deposit turned out to have been successful. 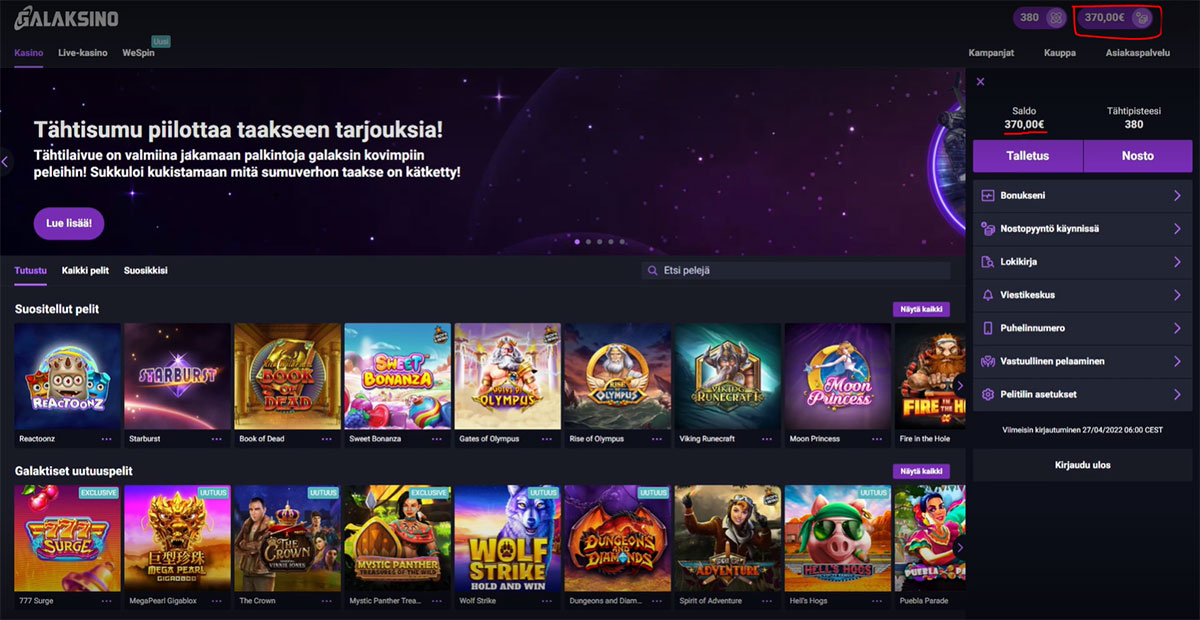 As he had no intentions of making that large deposit, he turned to live chat once again. He explained the situation, and asked them if it would be possible for him to cash out EUR 185, and continue playing with the remaining EUR 185. 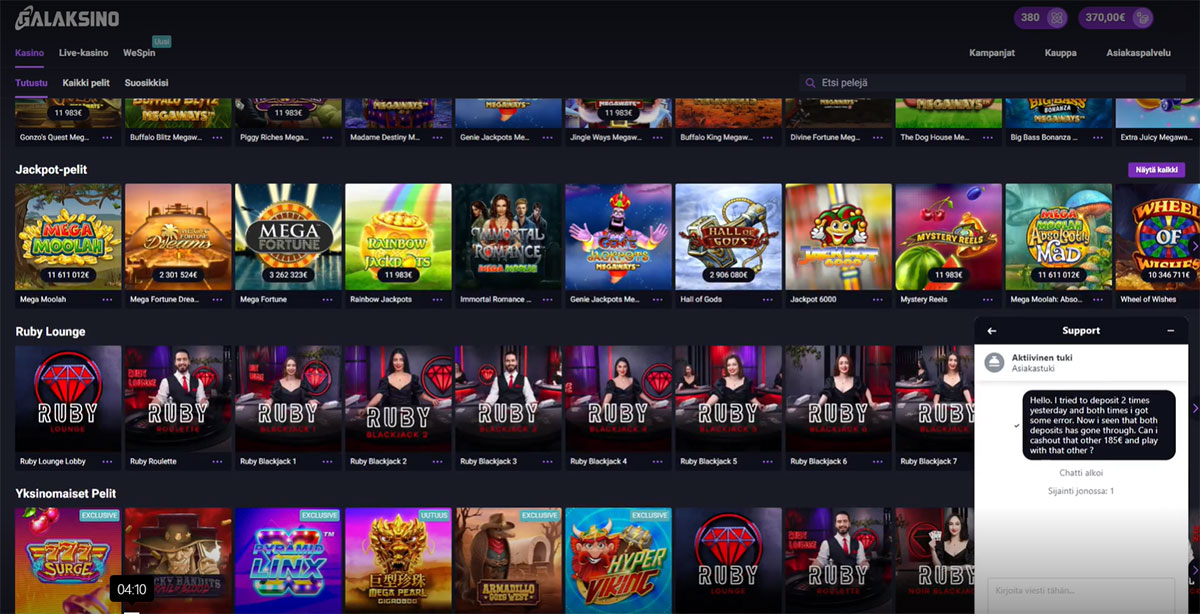 The support agent permitted him to withdraw the said amount, so the tester could now proceed with his investigation. His balance was EUR 185, which was precisely the amount he intended to deposit in the first place. 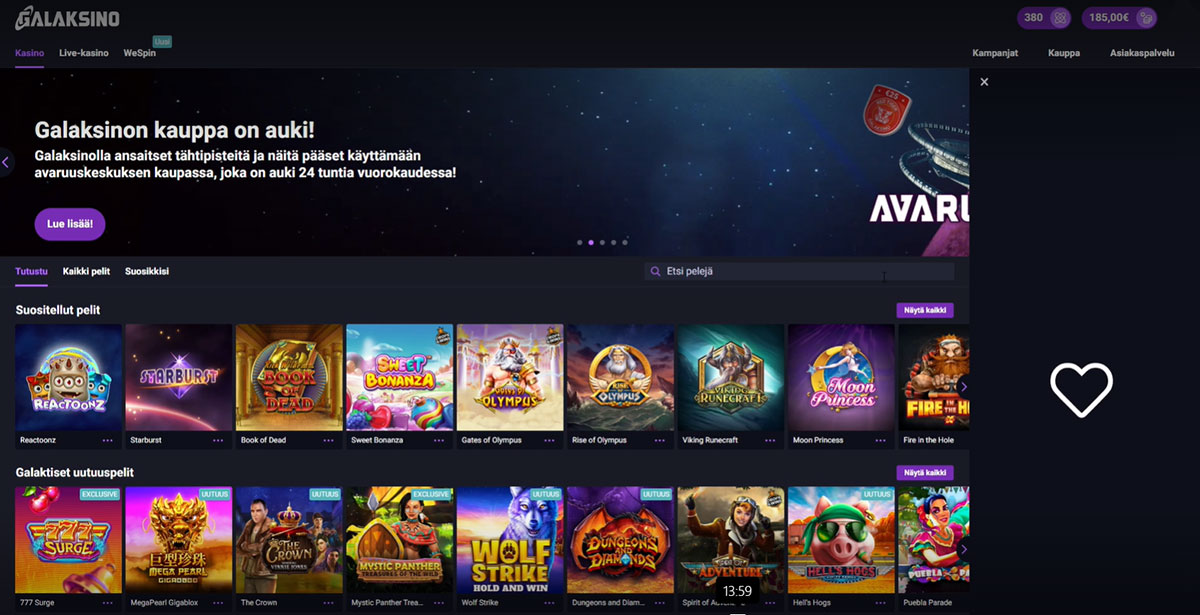 All games are played in EUR. The minimum amount to deposit is EUR 5. Available methods include Pay N Play, Trustly, and Nordea.

“2.10 If a player's deposit is subsequently rejected by the player or payment service provider, the company reserves the right to temporarily close the gaming account until the matter has been investigated and resolved.”

Having resolved the situation with the deposit, he went on to explore the operator’s massive portfolio. Genie Jackpots Megaways was the first game he played, followed by all-time favorite Gonzo’s Quest and Fruit Case.

The next in line was Terminator 2, during which he won EUR 57,42. The tester also checked out Game of Thrones 243 and The Finer Reels of Life.

Shortly after, he launched Bonanza by Big Time Gaming and Iron Bank. After that, he switched to Immortal Romance Mega Moolah.

During the same game, he triggered a free spin feature and scored EUR 54.16. The same feature was initiated once again, during which the tester collected a win of EUR 41.

Having completed this game, he ventured into White Rabbit and Sakura Fortune II. His next choice was Piggy Gold followed by Break da Bank Again Megaways and Money Train II.

A day after that, on April 29, 2022, the tester launched Immortal Romance. On April 30, he tried luck with Diamond Mine Extra Gold, had a couple of rounds on Fruit Case, and ended his gaming session with Legacy of Dead.

On April 30, 2022, the tester made a request to withdraw EUR 50 via Trustly, the same method he used to top up his balance. 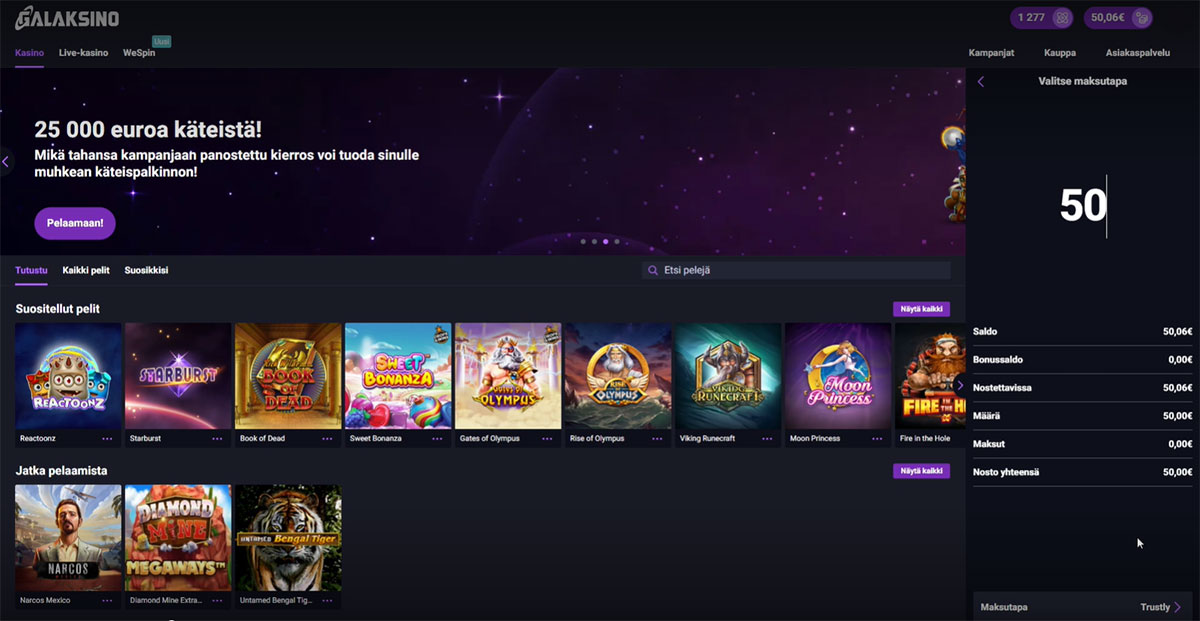 He entered the code he received via phone, and approximately 15 minutes later, the money was credited to his balance. A confirmation arrived on his e-mail as well.

To be able to request a withdrawal, a punter needs to wager the deposit amount at least once. Withdrawal is possible via Pay N Play and Trustly. The minimum amount to cash out is EUR 20. Processing time for withdrawals is up to 2 working days after approval.

Only two withdrawals per month are free of charge, the third and any subsequent are processed with a EUR 5 fee.

Even though the technical error resulted in the tester being charged twice when making a deposit, everything was resolved quickly with the assistance of a live support agent. Other than that, the tester encountered no problems while exploring Galaksino.

This very tester has so far explored a couple of online casinos which accept players from Finland, unveiling a plethora of valuable insights to the community. If you want to take a closer look at the details of those investigations, these are the articles to read:

Have you had the opportunity to play at Galaksino casino? Don’t hesitate to share it with us in the comments section below. Gamble responsibly!

“it seems as if everything went with no issues”

It is important to have information about safe places to play, thanks for one more great and helpful report.

I hate when errors like that happen, but at least they did their best to help fix it. Overall a great test, well done!

Surprised how well this turned out! Galaksino is taking a huge steps to the success I see, good for them! And thanks for the report!

I am always glad when the Live Chat team provides prompt feedback and efficiency when needed. We've had a chance to get to know the Pay N Play casino, so important for our members. Good work Galaksino, thank you Punakontti :)