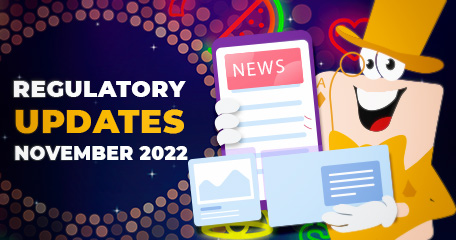 While the previous month had been a relatively slow one in terms of any significant changes in either the land-based or online gambling industry, the situation drastically changed in November. As for the USA, Maryland launched online sports betting market, whereas California would have to wait until November 2024 referendum to have it regulated.

Meanwhile, in LatAm, one of the provinces in Argentina seems to be having double thoughts on regulating online gambling, while Peru went live with a draft that aims to govern the iGaming sector. At the same time, Ireland published new measures for more responsible gambling, in particular advertising and incentives.

Most Recent Updates from the USA

Let’s start with the District of Columbia, where council member Elissa Silverman presented legislation to open the district’s regulated sports betting market to commercial operators interested in offering services to the locals. The bill would terminate Intralot’s contract to operate GambetDC in 2024.

…both sports betting ballot proposals were rejected, which means that this activity will not be legalized in the state before the next referendum in November 2024. The Sports Betting Study Committee of Vermont submitted its recommendations to the state legislature. The Committee advocated for greenlighting two to six online sports betting operators with a tax rate of 20% of the gross win.

Furthermore, the Gaming Board of Illinois reopened the application process for operators interested in providing online sports betting services. The process for the three available online-only licenses for sports wagering would run until March 1, 2023.

… finalized drafts of the state’s tribal gaming compacts. If the Department of Interior approves them, tribes will be permitted to offer casinos as well as online gaming and sports betting on reservation land. While the compacts do not allow for tribes to extend online betting and gaming statewide, the Governor did include language to say this would be permitted if the state law allows it.

Has Anything New Happened in LatAm Region?

Despite a slight delay, online gambling was expected to go live in the province of Córdoba (Argentina) just ahead of the World Cup. Eight companies received licenses to operate online sports betting and casino games for fifteen years. However, Councillors for the Municipality of the City of Córdoba have stated that city laws prevent online gambling from going forward as they do not permit gambling within the city limits.

…the sports betting bill (Bill 613/2022) which suggests a minimum rate of only 2% on the “ISS” tax (the tax on goods and services) for betting companies looking to set up in São Paulo was approved in the first public hearing. If passed during its second hearing it will be sent to the mayor for his approval.

As for Peru, the Foreign Trade and Tourism Committee (MINCETUR) published the draft regulation of its online gambling bill. Until December 2, 2022, potential stakeholders can provide comments and suggestions regarding the document.

The Cabinet approved legislation to overhaul gambling regulation in Ireland. As far as suggested, advertising between 05:30 and 21:00 would be prohibited, whereas online advertising would be restricted only to people who opt in to receive adverts.

…the Bill also includes a ban on versatile gambling incentives such as free bets, loyalty schemes, and special offers/treatment. Also, a new regulator will be established to govern the industry and enforce regulations as well as coordinate a new 3-tier licensing regime for B2C, B2B, and charitable companies.

The National Lottery Regulatory Commission of Nigeria (NLRC) announced the introduction of a new online gambling licensing regime. With these new licenses, operators would be permitted to offer online gaming and sports betting. To be taken into consideration, operators must already be licensed in another jurisdiction and must then meet responsible gaming and AML requirements to be established by the Commission.

Thanks for the recap, not easy to keep track, so these articles come very useful.

Gambling regulations are evolving and there is always something new. Thank you LCB for this extensive report on the most recent developments.

I think every country should follow Ireland’s example on advertising, to protect minors from being exposed to gambling-related ads. Thanks for the report.