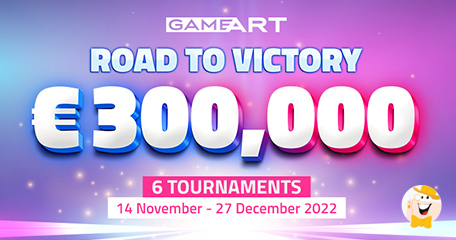 It is with great honor that we present one more grandiose network promotion, promising to take players on a rollercoaster of prizes throughout this year’s last two months.

Brought to you exclusively by GameArt, Road to Victory is one of its biggest network promotions to date, featuring a €300,000 prize pool and a six-week time frame. Participants can join between November 14 and December 27, 2022.

The up-and-coming developer of high-quality HTML5 slot games like Surfin’ Joker and Angry Dogs, GameArt, is rolling out its grandest network promotion yet. The prize pool is a real treat, amounting up to €300,000.

The provider’s massive network promotion is titled ‘GameArt Road to Victory’ and it will run for six weeks. Get ready to tune in from November 14 till December 27, 2022!

The contest will have six stages, each one running for an entire week until the end. Players will have loads of fun with some of the provider’s most popular slot titles, covering various themes, features, and payouts.

To learn more about the six stages and when to join Road to Victory, take a look at the following list:

In case you’re still wondering whether you can join, the Road to Victory promo is open to all of GameArt’s valued operators.  It starts precisely at 11:00 UTC on Monday, 14th November 2022 and ends at 22:59 UTC on Tuesday, 27th December 2022.

As reported by GameArt, plans for new major promotions are already in progress. The eventful promotional calendar for 2023 will be announced in the coming weeks.

After Aladdin’s Quest, the studio’s latest addition to the roster following Wild Marmelade and BlackJack Side Bets, there are three new upcoming slots to look forward to in the next two months.

Already live on October 18th, Diamond Magic Deluxe is a remake with complimentary spins and four different Buy Bonus modes. Get ready for a luxurious setting overflowing with sparkling diamond magic playing out on a 5x3 grid with 10 paylines, expanding wilds, multipliers, and respins!

Next, it’s Diego Maradona Campione on November 8th, another tribute to the greatest football legend who ever lived. Unlike Maradona Hyperways, the developer’s next celebration of his heroic moments will feature extra spins, stacked wilds, expanding wilds, and a retrigger. The game was co-produced by AppLoveSoft.

Get ready for November, this looks great. Good Luck everybody!

Woah! What a nice price pool, can't wait for November!! I hope everyone gets a piece of this pie hehe. Good luck guys!

This is a fantastic promo from GameArt. Good luck to all participants!

Awesome! This is a promo worth checking out and joining! Gameart has made a real breakthrough within the last two years, so I’m expecting they’re up to the task.