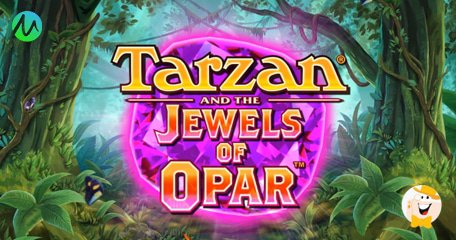 Aahuaaa uaaa uaaaaaaaa! King of the apes is back thanks to Microgaming and its rapidly developing content partner Gameburger Studios, whose latest follow-up in the series is now known as Tarzan and the Jewels of Opar. This high-energy sequel features five reels, 20 ways to win and a variety of thrilling features, backed with some punchy animations.

As a compelling slot release of high caliber, this game represents the latest product of a collaboration between Microgaming and Gameburger, one of the independent development studios on the network, famous for launching 9 Masks of Fire and Playboy Fortunes.

After an incredibly successful two-week exclusivity period with select operators, the game is finally live across a wider affiliate structure, starting on Tuesday, 20 October.

By following Tarzan on a new quest, players will be sent to Opar, a lost city buried deep within the jungle. Their task is, of course, to find hidden treasures and to do it, they will have to look out for jewel scatter symbols that appear on every reel. In addition, landing three or more scatter symbols will help them trigger up to seven levels of Scatter Jackpots, coming with a maximum prize of 5,000x total bet!

With respect to graphics, Tarzan frequently swings through the trees during the game, randomly adding up to 15 wilds for a greater win potential. The Random Wilds feature is available in base mode and during complimentary spins.

Here’s a bit of trivia: Tarzan and the Jewels of Opar is the fifth installment of Edgar Rice Burroughs’ classic fantasy adventure series. It also represents Microgaming’s second take on the Tarzan legend, a story about a child raised in the African jungle by the Mangani great apes.

After reaching a full exclusive licensing agreement with Edgar Rice Burroughs Inc., the Isle of Man-based supplier was finally permitted to produce a new Tarzan-branded gaming product. Take a look at the official trailer here:

“Gameburger have pulled off another incredibly fun and playable game in Tarzan® and the Jewels of Opar™, which has all the hallmarks of a classic Microgaming title. The game was an absolute hit during an early exclusive release period, consistently performing among our top five games per operator in terms of player retention alone. Players are going to love this new spin on a branded classic.”

King of the Apes and Staggering Win Potential

As a medium volatility slot game, Tarzan and the Jewels of Opar comes with a very high maximum potential of 12,500x in the bonus level. Its long-term RTP seeds at solid 96.38% and bet can be arranged between $0.2 and $20 per spin.

Visually, we can easily say that the installment represents one of the best slots about Tarzan on the market, especially when major attractions such as random wilds, jackpot scatter wins and multiplilers kick in.

Among other October releases from Microgaming and its expansive network of retailers are also African Legends, Western Gold, Wanted Outlaws, 777 Royal Wheel, Chocolates and a diverse selection of titles from Gold Coin Studios, Eyecon, Pulse 8 and other booming franchisees.

Welcome to the jungle! Tarzan is making a return, and it's with the help of Microgaming and Gameburger Studios that this was possible. This is a beloved character that a lot of people grew up with, and I think it will experience a huge success.

The legend lives on thanks to Microgaming. Tarzan was and obviously still IS one of the greatest heroes of the 20th century cinematography, undisputed king of the apes and a fantastic source of inspiration for many industries, including slot development.