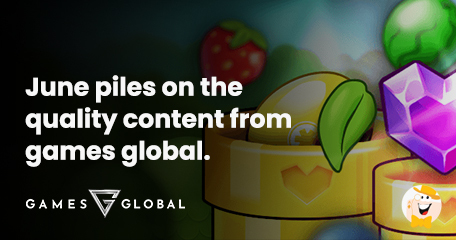 After it boldly charged onto the iGaming scene in May with an array of blockbuster titles ready to firmly establish the provider’s industry presence, Games Global is back with a new line-up of releases that will deliver hours of fun and entertaining content to players all around the world!

Following the acquisition of Microgaming’s distribution business and online games portfolio, the new owner is set to ensnare the industry all throughout June, so let’s see what’s in store this month!

Released on 28 June is a great new hit from Snowborn Games, set to deliver big time entertainment on a retro-looking 20 payline grid, packed with high volatility, bright colors and bouncy music. Named Pile ‘Em Up, the game comes with a cash collect mechanic, enhanced multiplier potential for constant action and 1UP symbols that can boost the multiplier.

This month, Fortune Factory Studios launched Mask of Amun on 21 June, promising a new round of quests in Ancient Egypt thanks to a host of exciting features, Eye of Ra jackpots, scatter symbols, wilds and the thrilling new Gold Blitz instant cash collection bonus. Get ready to truly maximize win potential with high volatility, 4,096 ways to win, an epic bonus choice adventure, and up to 5,000x cashout capacity on a single spin!

The mystical realm of the gods is this month’s theme of choice in Just For The Win’s Divine Riches Helios, out on 14 June. It is a medium volatility 30-line slot featuring complimentary spins with symbol upgrade, random cash bonuses and the popular pays both ways mechanic. All divine Helios symbols landing in a winning combination on adjacent reels pay from left to right and right to left, by the way.

Meanwhile, SpinPlay Games is taking players deep into the dragon’s lair this June. Released on 8 June, this title will enchant you with expanding reels, nudging wilds, multipliers, bonus spins and instant cash prizes, while its medium volatility is in perfect balance with a win potential of up to 5,000x the bet!

Stumpy McDoodles is Back!

If you missed it on June 16, here’s a quick update about All41 Studios’ release called 11 Coins of Fire! It’s a true visual interpretation with a Nordic theme on a 5x3 grid featuring the popular EpicStrike feature, bonus spins with extra wilds, high volatility and a treasure pick bonus.

Out on 20 June is another great history-based release from Northern Lights, called 4 Corners of Rome. The game easily transports players back to the legendary empire across a 5x5 reel set supported by 40 paylines, a glorious win potential up to 6,300x, and a thrilling lock and load mechanic.

However, perhaps the biggest hit of the month was Foxium’s Stumpy McDoodles 2, released on 23 June as another fun-filled, jolly Irish-inspired experience. It reunites players with an old favorite across 5x5 reels and 40 paylines, while the main features include additional prizes, new ways to play, a maximum win potential up to 11,600x the bet, and more!

Among other great titles in June are also Wild West Romance from Aurum Signature Studios, live on 6 June. It plays out on a 5x3 layout but it offers 243 ways to win and a saloon-full of features such as wild multipliers, five sequentially unlockable bonus spin rounds and Rolling Reels, plus a combo of multiplier wins and random wilds.

Next on the radar is Real Dealer Studio and its Turbo Fortune, due for action since 27 June. You will also discover Aquatic Treasures Coast 2 Coast by Gold Coin Studios, ReDeal Blackjack from Switch Studios and a host of new partner network releases like Dynamite Strike from Stakelogic, Hacksaw Gaming’s Outlaws Inc., MGA’s El Cartel Plus, and The Choice is Yours Megaways from Iron Dog Studios.

Oh I get it so now all those brilliant games we’re used to seeing from Microgaming are delivered to us by this company... new owner but everything else is the same. For now, at least.