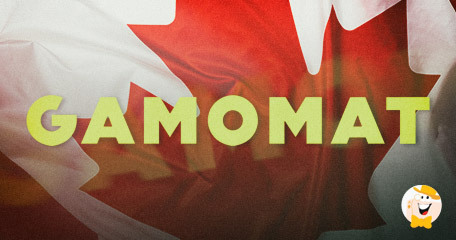 Only a week after announcing entrance into the Portuguese iGaming market, thanks to the partnership with ORYX Gaming, one of Germany’s top online gaming developers with an outstanding portfolio for slot fans, GAMOMAT, is back to celebrate the launch of its technology components and services within the Canadian province of Ontario.

The company’s expansion in North America will be supported via its long-standing distribution partner, Bragg Gaming Group Inc.

A Debut in Attractive New Market

After being registered by the Alcohol and Gaming Commission of Ontario (AGCO), GAMOMAT has been given green light to launch a strong selection of its most popular titles in the region, such as Ramses Book, Take 5 and Books & Bulls.

As a result, operators in the Canadian province of Ontario now have access to some of the provider’s most recognizable games, which have long been considered as high class in the attractive North American market.

GAMOMAT has made this landmark market move soon after going live in Portugal and the Netherlands, where its technology components and services have been certified through Bragg Gaming Group Inc.

The German-based online game developer is building its successful growth strategy in North America thanks to these two breakthroughs in the European online gambling sector at the beginning of April.

By the way, among the most recent European markets on GAMOMAT’s list of active iGaming territories are over 30 countries while its games are supported in 23 languages.

As a software provider with some 260 titles, GAMOMAT is constantly strengthening its position on the global market and North America, and entering Ontario, Canada is a significant milestone for the business, commented chief partnership officer, Dimitry Voelkle.

Third Follow-up from Flaring Fruits Series is Out

As announced earlier in February, GAMOMAT is finally bringing its third follow up from the Flaring Fruits series on 14 April.

This installment comes right after the eye-catching launches, called 5 Flaring Fruits and Sevens Fire, bursting with colors and features like wild substitutes. The studio’s latest game, however, has 20 paylines and a standard 5x3 layout where a special scatter Star-Symbol pays in any position.

To amplify their wins, players can climb the risk ladder and gamble within a special round up to five times. 20 Flaring Fruits is available to all ORYX partners in 27 languages.

The game’s RTP is 96.11% while the low volatility offers a balanced slot experience intended mostly for beginner and intermediate players.

“GAMOMAT has been given green light to launch”

Gamomat is a well known software provider with high quality games. Their presence on Canadian market will be a successful move.

That's one more seal of approval they managed to get for their games. Shows how good of a job they are doing!

Congrats to the studio, this is big news and a great achievement! Conquering new markets is usually beneficial to the brand.

Congratulations! Gamomat made a very important move! This will benefit both parties!

So far, some of the best names in the industry have entered the Canadian market, and Gamomat is certainly one of them. Congratulations!