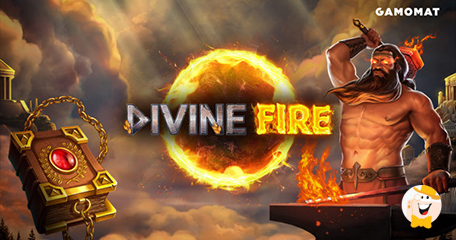 After releasing a follow up title from its Flaring Fruits series in April this year, GAMOMAT, one of the leading independent software developers for slots, is back in May with Divine Fire, a tribute to the ancient Greek pantheon and mythology.

This is the second game from the German online game developer after entering the newly regulated market of Ontario in Canada last month.

The Home of Gods

Unlike the studio’s two previous slot releases, 20 Flaring Fruits and Mayan Fire, the latest title is set on Mount Olympus, a notable place in Greek mythology and home of the ancient gods.

According to GAMOMAT, who entered Ontario in April, Divine Fire is a book game that welcomes all players to the mountain where gods dwell and forge weapons for battle. You will hear a powerful soundtrack while spinning the reels on a 5x3 layout, creating a dynamic experience and atmosphere that heightens tension on the grid.

There are 10 paylines and a variety of symbols to match, including an anvil, a mighty hammer, Hephaestus himself and a menacing bull.

If you land golden books, you might get a chance to complete a win, since it represents the wild and substitutes for all symbols except bonus images. However, the book also acts as the scatter, whose presence on the reels as three of a kind or more awards 10 bonus spins.

During this stage, it is even possible to win extra rounds, helping you to reach Fire Repsins and spice up the jam.

Before you enter mini games, a bonus symbol will be assigned by a draw while every image except the Book and Fire Orbs can become that symbol. On top of that, five or more Fire Orbs will trigger three Fire Respins whose tally is awarded at the end of the round.

The Orbs are labelled Mini, Minor and Major, but if you fill the entire screen with 15 of them, the game will set off the Inferno bonus.

This slot by GAMOMAT is also part of the Fire Respins series, a new collection of products that first launched with the popular Sevens Fire title. Its theoretical RTP is 96.14% while the math model is based on medium volatility. Divine Fire is available to all ORYX operator partners if you want to give it a go in real money.

“Hephaestus was the Olympian god of fire, smiths and craftsmen and our creative studio have produced a game worthy of his standing. Players will love the graphics and slick game play,” commented about the latest launch Dietmar Hermjohannes, founder & CEO of GAMOMAT Development GmbH.

Coming up in June

As announced on their website, GAMOMAT will be back next month with a new title. Players will get a taste of the studio’s next juicy fruit-themed game, called 50 Flaring Fruits on June 16th, 2022.

The mouth-watering release is bursting with color and features, just like all the previous editions in the popular franchise. In terms of design, the upcoming fruit machine will have a 5x4 layout, 50 paylines and an extra scatter Star-Symbol that can return delicious extra winnings.

“Divine Fire is a book game”

I tried a few spins of this game and I liked it, greek-mythology themed slots are always favorite for me and I'm sure our players will like it too.

I enjoy the powerful design and fantastic mythology idea, something a little different from Gamomat, so I like it.

Another slot in their style, simple but always good for playing.

Gamomat has made another excellent game. Players will enjoy playing it!