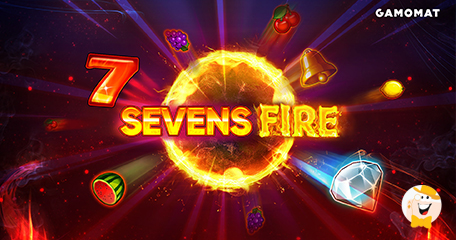 After releasing Book of Oasis in December 2021, GAMOMAT returns this month to turn up the heat with Sevens Fire, a new fruit machine that combines classic slot gameplay with a fiery hold-and-respin feature.

The latest arrival is available in 27 different languages across all desktop and mobile-based platforms, featuring an RTP of 96.13% and a math model established on medium volatility.

One of the leading independent slot game developers from Germany, GAMOMAT, is back to igniting gaming passions in January 2022 by releasing Sevens Fire, a semi-volatile ride where players must collect all the fire orbs to unleash the inferno and sum up jackpot up to 50,000 credits or more!

The studio’s next big fruit-themed slot is packed with 10 ways to win and a 5×3 reel set. It represents the first installment of the Fire Respin franchise that is set to become one of the greatest products in the portfolio that players will absolutely love.

To complement the entire setting, GAMOMAT has included a fiercely absorbing soundtrack, while the powerful yet classic fruit slot gameplay comes with a fiery hold-and-respin mechanic to up the ante!

As announced, an inferno is unleashed if the golden fire orbs appear on the reels. Players can even try your luck with card gamble and risk ladder, allowing them to add another level to the gaming experience. Sevens Fire is now available to all ORYX operator partners via ORYX HUB.

A trailer for the game can be seen here, which also reveals where the Fire Respins feature will spread next.

“Sevens Fire is a game that I can say with great certainty will become an outstanding success,” said Philipp Schroedel, senior product manager at GAMOMAT Development GmbH.

As stated by the SPM, the game design and gameplay are spectacular and the team is particularly proud of the Fire Respin feature that gives the players an opportunity to achieve stronger performance within the other upcoming titles of the series.

The next month of the year 2022 brings another impressive juicy title, called 5 Flaring Fruits. This fruit-based game will be part of GAMOMAT’s new colorful series of Flaring Fruits. It is played on a 5×3 layout with 5 paylines and it features a distinguishable scatter star symbol with amazing extra winnings.

Unlike this month’s release, 5 Flaring Fruits is played in low volatility and has a solid RTP of 96.11%. The game’s main features are card gamble and risk ladder, and it will also be available on Android and iOS-based devices with no exception to other platforms either, just like an earlier hit, Royal Seven.

The official release date if February 22nd, and the teaser trailer can be seen on the provider’s streaming channel.

Back in October 2021, the provider successfully expanded its presence in the newly regulated market of Netherlands, giving all potential customers in the country instant access to some of its greatest titles, like Crystal Strike and Arizona Star.

“back to igniting gaming passions”

This provider is easily recognizable by its classic, retro style and this game is just like that. I'll give this slot a chance!

Not bad but nothing we haven't seen before. I will try it out and than see if it's worth the hype...

As far as we can see in the video, the game seems quite fiery. I hope the winnings will be as powerful as the trailer! ;)

Two new fruit games to disrupt the usual mythology-cosmology cycle, not bad. From what I’ve seen nothing particularly new, but well worth the effort it seems. The second game has potential.