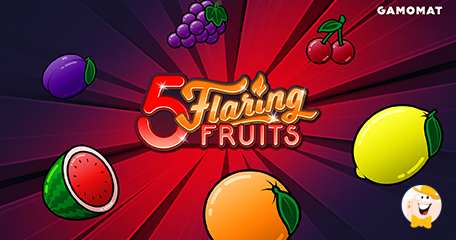 The leading German online game developer focusing on delivering of outstanding gaming experiences for slot fans, GAMOMAT is expanding its portfolio this month with outbursts of joy in its latest release, 5 Flaring Fruits.

A Fruit Machine with 7 Wilds

Launched in the land-based market in 2008, GAMOMAT has assembled over 130 high-performing slots, exclusively implemented and distributed by ORYX.

Released on 22 February, or exactly one month after Sevens Fire, the company’s latest 5 Flaring Fruits slot brings another round of juicy action, as it is packed with vibrant colors and remarkable features like extra scatter star-symbols, card gamble and risk ladder. It has only five paylines within its 5×3 reel layout and 7 wild substitutes – more than any other slot of this type for sure!

However, the wild symbol can replace all the symbols except scatters.

With its futuristic style, the 5 Flaring Fruits slot game makes the colorful fruit pop all over the screen and there is a special scatter star symbol that pays on any position too. Of course, all wins are added to line wins when revealed. Only the highest scatter win counts towards payouts, as explained by the studio.

GAMOMAT’s latest fruit machine offers players a chance to bolster their winnings in this low volatility slot by climbing the risk ladder and entering card gamble. 5 Flaring Fruits has an RTP of 96.11% and it is available to all ORYX operator partners via ORYX HUB.

A sneak peek of the 5 Flaring Fruits game is available here.

Mayan Fire Next in Line

The next title in GAMOMAT’s roster is called Mayan Fire and it is scheduled for launch on 29 March. In this adventurous game, players are invited to embark on an adventure into the Mayan world where the mighty Xiu, god of fire, ignites the Fire Respins and sacrifices the low-value symbols to grant great winnings.

Other features include high-paying-symbol free spins, card gamble and risk ladder, while the volatility is set at medium levels. The game’s RTP is 96.08% and it will be available in 27 different languages across all types of devices and platforms.

Back in November 2021, GAMOMAT has received Gold and Silver in the Branded Entertainment category at w3 Awards for its outstanding proprietary slot, Crystal Strike.

As one of the leading independent slot game developers, this studio focuses on delivering an outstanding gaming experience for slot fans with its seasonal games, double rush feature, book games, and other out of the box in-game attractions, presented in hits like Lava Lions, Monkey Mania, Sevens & Books as well as Book of Oasis.

Perhaps a bit underrated outside of Germany, but this studio has a lot of potential to grow and win the hearts of many players in the coming years. They make really good slot machines.