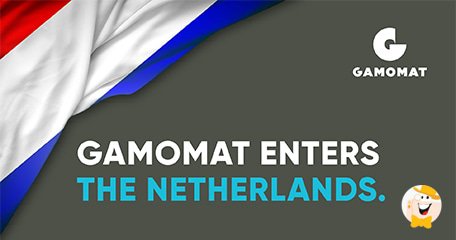 GAMOMAT proudly announced that its gaming portfolio is now available to Dutch players.

The European country of the Netherlands recently introduced the latest version of the Dutch Remote Gambling Act, which aims to regulate all the laws concerning online gambling.

The introduction of this law was a ground-breaking moment for numerous operators who patiently waited to receive their licenses. Among others, ORYX Gaming received a certification for its iGaming platform and the remote gaming server, and soon after sealed a distribution deal with GAMOMAT.

Thanks to this fortunate chain of events in the Netherlands, GAMOMAT received the opportunity to present its work to Dutch gamblers.

Gamers from this county now have the chance to try their luck on titles such as Crystal Strike, Arizona Star, Roman Legion, Burn the Sevens, La Dolce Vita…

“The Netherlands represents a core market for GAMOMAT’s growth ambitions and we’re thrilled to bring our games to the Dutch iGaming audience. A wide collection of our most popular games will be available thanks to our distribution partnership with ORYX Gaming.”

GAMOMAT, German-based iGaming provider, was launched back in 2008. This software developer is specialized in creating innovative slot games, jackpots, and a special Maxiplay package of slot features

Its team team likes to point out to its clients and audience that all the decisions involved in making the content are exclusively its original ideas and creativity.

Considering it appeared on the iGaming scene more than a decade ago, we couldn’t say it is a young company, but we would not make any mistakes by saying that it grew fast this year.

At this moment, it counts something over a hundred titles in its gaming portfolio, and its content is available in over 35 countries, and from a couple of days ago- in the Netherlands, too.

“GAMOMAT’s gaming portfolio is now available to the Dutch players”

Another great step for Gamomat, I am sure that the players from the Netherlands will enjoy their games

I am not a fan of GAMOMAT slots, but i am happy they are achieving to expand on more markets. The competition is very strong.