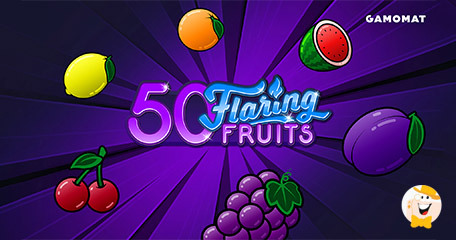 How About One More Portion of Most Delicious Fruits?

GAMOMAT, a German-based online software developer announces one more fruitilicious addition to its colorful portfolio. Named 50 Flaring Fruits, the newest installment has everything fans of vintage games could look for, plus localization in more than 25 languages.

Aside from diligently working on boosting the catalog, the studio is also spreading its international presence. From the beginning of the current year, the studio has entered two key markets- Ontario and Portugal, giving local players a chance to explore its top-performing hits.

Taking place on a 5x4 grid, 50 Flaring Fruits by GAMOMAT captures players’ attention thanks to radiant colors and the most delicious set of all-time favorite symbols.

…it incorporates 7 Wild substitutes for all the symbols aside from Scatters. Speaking of, there’s a special Scatter Star Symbol that pays on any position on the reels. When displayed on the screen, each win is added to line winnings.

Sweetening up the gameplay additionally are the card gamble and risk ladder. The former challenges players to bet on the color of the next card, while the latter sees the player either progressing or downgrading, depending on the outcome.

It’s important to mention that 50 Flaring Fruits is available to all ORYX operator partners via ORYX HUB. Those who prefer social gaming can check it out via Whow.

Unveiled in February 2022, 5 Flaring Fruits was the one to open the mouth-watering series of fruit-inspired games. Taking place on a 5x3 grid, the ice-breaking release has more or less all the same elements as the most recently presented title, but a smaller number of paylines-5.

…the studio showcased 20 Flaring Fruits, again with the same set of features as both aforementioned games, but 20 paylines. As hinted by the developer, the series will also be reinforced with another addition dubbed 100 Flaring Fruits.

Taking a look at GAMOMAT’s colorful portfolio, players shall notice that the predominant number of releases are actually fruit-themed slots. Other than this, there are a couple of titles drawing inspiration from history, culture, magic, and myths, such as Book of Oasis, Mayan Fire, Roman Legion, Crystal Ball, and more.

An interesting detail regarding Book of Oasis is that the studio is donating a share of revenue acquired from this game to support climate protection organizations. They even established the “Gaming for the climate” initiative to show how determined they are to protect nature and raise awareness.

The very beginning of April this year saw the studio receiving certification from Portuguese regulator - Regulação e Inspeção de Jogos. Facilitated through the studio’s successful partnership with ORYX Gaming, this license enabled them to exhibit Books & Bulls, Fancy Fruits, Take 5, Tower of Power, and many other fun-filled games to players from Portugal.

A couple of days later…

…the company conquered one Canadian province, as their distribution partner Bragg Gaming Group Inc. completed the registration process with the Alcohol and Gaming Commission of Ontario (AGCO). With this agreement, customers residing in Ontario got a unique opportunity to spin the reels of the provider’s excellent slot adventures.

Fruit slots are a trademark for slots and always will be :) You can't beat that. :)

I wonder if people will ever get tired of fruit slots…Apparently not, as the providers still keep on delivering them…