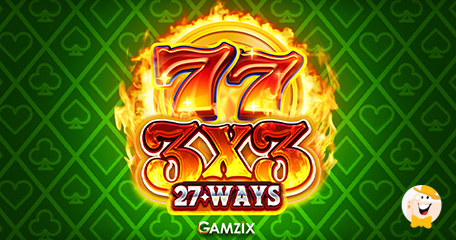 Continuing to fill its portfolio with enticing content, Gamzix, a creative provider of fun-filled online casino games has launched one more interesting title. Equipped with a set of delicious fruit symbols, the 3×3: 27 Ways slot is bound to capture the attention of fans of retro games.

Displaying an RTP of 96.1% and max win exposure of over 300, this release is suitable for all playing styles and preferences. On top of that, it incorporates Gamble Game, which makes the entire gameplay even more unpredictable and exciting.

Aside from diligently boosting its catalog with action-packed games, Gamzix has been strengthening its presence via strategic deals. From the beginning of the current year, the creative gang has teamed up with multiple big names such as SOFTSWISS, EveryMatrix, BetConstruct, and more.

As soon as the reels of the 3×3: 27 Ways slot are activated, players are presented with vividly painted fruit symbols- cherries, watermelons, lemons, grapes, and plums. In addition to this, there are bells, stars, sevens, and bars, all typical for retro slots.

Commenting on the most recently added installment, Oleg Galushko, CPO at Gamzix said:

“Sometimes the best ideas are hiding in already good products. And this is exactly what happened with our classic 3×3 fruit slot. The game by itself doesn’t need any refinements. So we decided not to make it better, but try to play with mechanics, add a few features. And this is how we ended up with the new slot “3×3: 27 ways.”

…there’s the Gamble Game, where players are challenged to select one of the four turned-over cards and beat the dealer’s card. If they win, the prize is doubled and they have one more attempt. In case the dealer wins, the prize is lost. The maximum number of attempts is 10.

For those among you who prefer simple formats, there are a couple of more titles to try luck with. 3x3: Hold the Spin comes with 5 fixed lines, an RTP of 96.1%, a max win of 1,579x, and a bonus game. In light of the recently celebrated spooky holiday, the studio launched 3х3: Hell Spin, bringing max win exposure of over 700.

Eager to make its portfolio attractive to players who like other categories of games, Gamzix decided to push the limits a bit and venture into something new. Inviting consumers to get ready for the craziest flight, the studio rolled out Pilot- its very first crash game.

Spicing up the atmosphere is the sound of the plane taking off each time a consumer completes a round. Worth noting is that the game comes with the ability to change skins for individual casinos. It supports a wide range of currencies and can be switched to more than 20 languages.

It seems as if the project was more than well-received…

… as the ice-breaking game got company- Pilot CUP. Designed to meet the demands of football fans, this themed game comes just in time for FIFA World Cup 2022.

In the upcoming days, players can expect Pilot Coin, which draws inspiration from crypto-trading. This installment displays low volatility and a return to player percentage of 96.5%.

The logo for this actually looks really cool. I'd even go as far as to say id give it a try based on how cool it looks. Hopefully it would deliver and not let me down. Would hate for it to disappoint

Classic 3x3 games are great for true casino like experience. It looks like a decent slot for every player who likes old-school casino gaming.