Get Ready for Battle with Kensei Blades Slot, Newest Work of Art by Betsoft 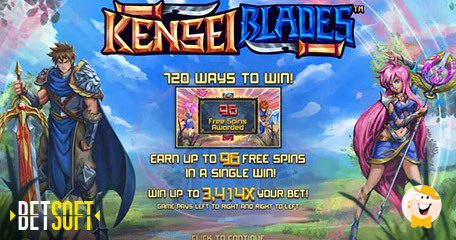 Betsoft, one of the most creative online slot developers, announces another addition to its rapidly growing collection of fun-filled games. Dubbed Kensei Blades, the most recent addition gives punters the opportunity to feel like fantastical heroes and collect some valuable rewards.

Arranged in 3-4-5-4-3 orientation, this 5-reel video slot comes with 720 ways to win and exposure of 3414.1 x max bet. Equipped with a return to player percentage of 95.12%, and developed in HTML5 technology, this installment has everything fans of action-filled gameplay could look for.

The most recent release comes shortly after Alkemor’s Elements, a sequel to the studio’s all-time favorite wizard-inspired title, was presented. Kensei Blades slot follows a heroic blade master Kensei and his sidekick Sakura on their adventurous mission.

Just like any other title coming from Betsoft, this story has captivating illustrations filled with details. Spicing the atmosphere up are plenty of sound effects and a non-distracting oriental melody that follows the entire game.

In case you didn’t know…

…Kensei is a Japanese honorary title given to a warrior of legendary skill in swordsmanship. The literal translation of the word is "sword saint." This title comes with a huge dose of prestige, implying a high degree of perfection. Miyamoto Musashi is considered one of the most popular Kensei, but not all the experts would agree that he deserves this title.

One of the most prominent elements of the new title is the free spins feature, which gives players a chance to score 96 bonus rounds in a single spin. When this symbol lands on the reels, it awards not only spins but a prize as well. This feature can be retriggered, boosting opportunities to gain a max of 240 spins in a single game.

…which pays up to 50x bet, depending on the number of symbols which occupy the reels. Sakura Wilds serves as a replacement for all symbols, except for the abovementioned ones. It can appear on the second, third, and fourth reel.

Worth noting is that game pays left to right. This means that the number of winning lines is calculated by multiplying the number of matching symbols on each consecutive reel, either from the leftmost to the rightmost reel.

If you are curious to catch a glimpse of the atmosphere of the Kensei Blades slot by Betsoft, take a look at the trailer. Let us know how you liked it in the comments section below!

Upcoming Addition to the Portfolio

Aside from this masterpiece inspired by anime art, the studio intends to expand its catalog with one more game in May. Named Gemini Joker, this 5-reel video slot displays 5 reels, an RTP of 95.61%, and the opportunity to win a 1700x bet.

Jokers represent the most important symbols of the game, some of them acting as ordinary Wilds, the others being Multiplier Wilds. Done in HTML5 technology, this fruit-themed game performs flawlessly on mobile devices as well.

This is a perfect slot game for anime lovers! Definitely will be targeting that audience, great addition BetSoft!

I think a side mission, some sort of a bonus game, would fit in perfectly here! But, it looks okay like this as well.