Get Ready to Groove with Funk Master Slot by NetEnt 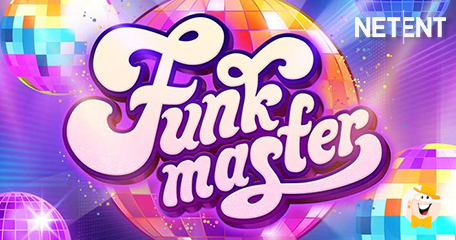 Feel like dancing? No problem, just put on your party shoes and become Funk Master, in the newest release presented by NetEnt. Spreading across an 8x8 diagram, the disco-themed online slot accommodates Avalanche mechanic, Dancing Wilds, multipliers, and the grooviest soundtrack you have heard so far.

Operating under the Evolution umbrella alongside Red Tiger, Big Time Gaming, and DigiWheel, NetEnt is a synonym for top-quality games. It accommodates a wide range of branded slots and adventures with a diversity of inventive features, making the portfolio optimized for various profiles of consumers.

It may come as quite an unusual fact, but Funk Master slot is only the second game presented in the current year. In February the studio launched Knight Rider, in collaboration with Universal Games and Digital Platforms.

It’s All About Dancing

Portrayed as the colorful disco ball, the Dancing Wild symbol moves on the reels to activate the Avalanche feature. The symbol relocates to one of the adjacent positions (horizontal, vertical, or diagonal) before the feature is activated, but once the Avalanche starts, it remains fixed.

…has other powers as well, when found in the special 2x2 square area called Dancing Wilds Hotspot during the main game. However, if this element randomly appears during extra spins, it occupies the 3x3 area.

Furthermore, the game bolsters multiplier symbols depicted as small bombs. Their value ranges from 2x to up to 10x. If two or more of these icons land on the reels during the same round, either in the base game or during bonus spins, they multiply the total win from that spin.

If all Dancing Wilds Hotspot positions are unlocked during the free spins feature, the reel grid itself can be upgraded for one row up. The max possible number of active rows amounts to 12. Finally, the game contains the Buy Feature, which costs 125x the bet.

Do you also have an unusual feeling that you have already played this game before? Then you have probably checked out the studio's moon-walking-inspired slot game Disco Danny. Though slightly resembling visually, these games are in no connection, other than the fact that they come from the same studio- NetEnt.

Taking place across a 3x3 grid…

…this funkilicious game displays 5 bet lines and a fine selection of rewarding features. With RTP ranging from 96.04% to 96.93% and high variance, it is designed to suit every play style.

More Music-Inspired Games from the Portfolio

It seems as if the provider gathers a team of people who are fans of great music, as its selection of games displays a multiverse of games inspired by bands and musicians.

Jimi Hendrix online slot accommodates Wilds, Respins, Pick and Click bonus among all, while Guns N’ Roses slot is home to an abundance of themed features such as Legend Respins, Solo Multiplier, Appetite for Destruction Wild, and more.

There’s Motӧrhead™ as well, which pays tribute to the legendary rock and roll band, and introduces players to Ian “Lemmy” Kilmister, his fellow musicians, and fantastic features.

It's been some time since we've seen a new release from NetEnt, maybe they prefer quality over quantity... since they rarely make mistakes when it comes to slots.

A nice funky vibe for a change. It's a nice game, cool music and a great vibe. NetEnt was silent this year, but hopefully this brings more noise with it.

I like these dance themes, players will have fun and enjoy disco music while playing :) It seems strange that Funk Master slot is only the second game released in the current year. Perhaps they are preparing a surprise...

It was about time for NetEnt to release a new game! Great music, I couldn’t stop dancing!