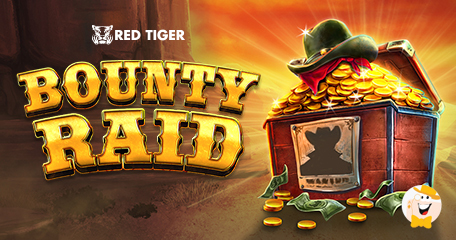 Wild West has always been inspirational for the movie industry, books, music, but slot games are no exception to this at all. Though found in almost every producer’s portfolio, none of them brings the same story, especially not Red Tiger’s newest achievement.

Filled with versatile features, the Bounty Raid slot gives an excellent opportunity to see what it’s like being a sheriff for a day. While chasing outlaws all over the town, one can collect huge prizes.

Are you ready to giddy up, cowboys and cowgirls?

Blazing a trail for the Wild West in search of outlaws, Bounty Raid slot comes with noteworthy rewards of over 1,000x. When the Bounty Hunter lands, it locks all Bandits on the reels for a respin feature offering humongous prizes.

When the Sheriff lands…

… it captures all Bandits on sight to grab their combined rewards and ride off into the sunset. With a 3x5 configuration and 10 lines, the game is optimized for a wide spectrum of languages and approved by the Gambling Commission of Great Britain and the Malta Gaming Authority.

Take a look at the official trailer to catch a glimpse of the cowboyish atmosphere!

…is not the first homage to gunslingers and treasure hunters. There’s also Wild Wild Chest, with all the “wanted posters,” empty whiskey bottles, and gold pieces scattered all around. When extra spins hit, shiny coins are not the only reward one gets- watch out for Wild Girls stepping in to raise the temperature on those reels.

From Wild West to Egypt

If things are to judge by titles presented so far, the winner of the first half of the current year is Egypt. Of so many releases launched so far, several of them pays tribute to one of the wealthiest cultures and civilizations.

Jewel Scarabs was the first one to open the season…

…bringing an impressive winning potential of 1,000x and a plethora of well-portrayed symbols. Wings of Ra, the next story with this thematic, brought a tribute to the Sun God and a popular in-game mechanic. This is the first title to be built on Tiger’s new Pixi.js framework, which greatly enhances the smoothness of the gameplay.

A month later, punters got the chance to explore the deep undergrounds in the Vault of Anubis. This 7x6 cluster slot was premiered in LeoVegas.

One of the most recent collaboration deals saw studio joining forces with Belgium-licensed online brand Napoleon. Thanks to this partnership, the operator got the opportunity to exhibit its award-winning portfolio of products.

…the supplier of top-notch one-armed bandits tied the knots with one of the globally most widespread company 888 casino. As a part of the deal, the entire catalog will be made available to the Spanish market.

One more territory added to RT’s map of conquered markets is Italy, via the agreement with Microgame. This supplier, who already has a well-established heritage among the Italian audience will provide Tiger an excellent opportunity to exhibit its games to new clientele.

“Bounty Raid slot comes with noteworthy rewards of over 1,000x”

Where does one go to find this slot? I'm confident I haven't seen it at any of my regular casinos.. Or is this Another title that is restricted to players from Canada and the United States? Does anyone know if one were to play under the guise of a VPN if that person would then be able to cash out any winnings from said...

Where does one go to find this slot? I'm confident I haven't seen it at any of my regular casinos.. Or is this Another title that is restricted to players from Canada and the United States? Does anyone know if one were to play under the guise of a VPN if that person would then be able to cash out any winnings from said slot? I would imagine not which is why I've yet to try such a thing but I hate finding a these awesome slots with great features only to realize I am excluded from gameplay due to my geographic region from where I reside, prior to logging in and playing via world wide web. Such restrictions are not supposed to be levied on us just because of the fact of where we happen to land on the globe prior to logging in. Js. ??‍♂️

Music is really cool and those characters look so retro, I like it. Perhaps more features would make it even better, but it’s okay.