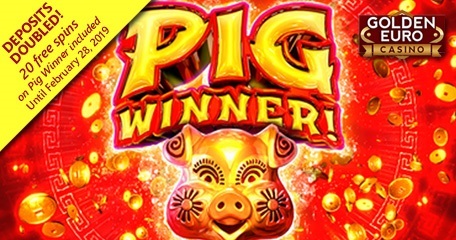 Golden Euro Casino is getting ready for one of the most festive and widely-celebrated events of the year – Chinese New Year! The colorful affair is a feast for the eyes and all other senses – in that regard, this online casino will host a fitting tribute to this great annual happening.

According to Chinese tradition, February 5th will mark the first day of the Lunar New Year (Chinese New Year begins on the new moon). This will be the Year of the Pig – commonly associated with emotions and intuition.

With 243 paylines, this spinning entertainment adorned in colors most commonly associated with the great culture – red and gold – has particular bragging rights for its grouped Wilds that will double players’ payouts for virtually any combo they contribute to.

And if they land on reels two and four...

...they become expandable and cover entire reels with even more winning opportunities created before your very eyes!

Should you be fortuitous enough to land three Yin Yang scatter symbols anywhere on the reels (and at some point, you will!), you will receive eight extra spins with massive retriggers.

And once the spins mode ends – all winnings made during this round will be tripled!

“Here in Europe we may be a long way from Beijing and Shanghai. But wherever you are, it’s hard not to get caught up in the excitement of Chinese New Year!”

To provide an extra oomph to these celebrations and new releases, Golden Euro is hosting a special promo until the end of February that will double players' deposits on Pig Winner and throw in an extra batch of bonus spins!

Called Pig Whistle Introductory Bonus, the promo works like this:

Deposits up to €100 will be DOUBLED - 20 free spins on Pig Winner included.

This can be obtained by using the coupon code: PIGWINNER. The promo will be valid from January 30 until February 28, 2019.

Realtime Gaming has so far supplied hundreds of games to this popular casino...

...In accordance to Golden Euro's inclination towards European markets, all of these games are played in Euro – the preferred currency of this site. Some of these titles, certainly those that are deemed most popular and best-performing, are also available via mobile devices.

And if you really are up for something exclusively Chinese, they have tons of these! Games created as a tribute to this great culture have been popping up left and right in recent years and most of them – like Gods of Nature, Shanghai Nights, Plentiful Treasure and Wu Zeitan (a tribute to Golden Age empress) – can be found here.

I love Chinese New Year celebrations, always an explosion of colors. And I may well partake in this, if nothing just to test the new game.