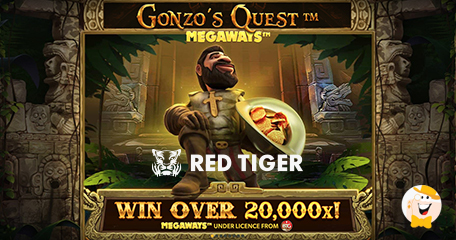 One of the most popular slot games in recent history, Gonzo’s Quest, will at long last get its successor - the sequel, Gonzo’s Quest MegaWays has been officially presented by Red Tiger Gaming.

The casino games and software specialist has, thus, revamped one of the most beloved titles in the entire industry.

Gonzo’s Quest is officially NetEnt’s game, and one of their best-performing ever…

…but this iGaming giant acquired Red Tiger Gaming last year, which has now developed the game exclusively for their parent company.

It was also the first game EVER to use cascading symbols in place of a conventional reel.

Again breaking ground, the sequel has introduced yet another new engine: the highly anticipating added layer of excitement comes in form of revered MegaWays mechanics which was licensed by Big Time Gaming, that varies the ways to win on every spin.

Much like its predecessor, Gonzo’s Quest MegaWays invites players to join the Spanish explored on his quest to El Dorado where adventurers could discover wins of up to 20,000 times.

“Gonzo’s Quest™ has consistently proven itself as one of the best slot games on the market, so we are delighted to give it a further boost with the renowned MegaWays™ mechanic.

The team has worked tirelessly alongside our partners at NetEnt to deliver this summer’s most anticipated slot. We are thrilled to see the collective effort rewarded with a fantastic new release.”

Check out the game’s official preview video below!

You can also read LCB’s full review of the game HERE.

Red Tiger is still riding the wave of success…

…having just come off the triumphant week in which the company won in FIVE categories during the EGR B2B Awards.

The gaming brand was deemed the best in these categories:

Gavin Hamilton, CEO of Red Tiger, commented on this achievement:

“We’re delighted to have won so many awards in one year and very pleased that our hard work has been recognized by both operators and our industry peers.”

“Gonzo’s Quest MegaWays has been officially presented by Red Tiger”

I could not agree more with Sylvanas. I too am hooked on this new Megaways version. The graphics are amazing, it keeps me hooked 100%. The payouts are nice. It pays more frequently than any other megaway I've played.

oh i love this original game, and the sequel looks promising

I already talked about the game at the forums, but I'm never going back to the original. The type of Wilds in this game combined with the avalanche feature work wonders.

It’s great the Red Tiger realized that not much needed to be changed when created Gonzo’s Quest Megaways, as the additional features only enhance the gameplay. This game is certainly worth playing. Whether or not you were a big fan of the original Gonzo’s Quest, this is a game that you’re going to want to play.

I have played Gonzo's Quest in the past and I found it to be a pretty cool game. I have always been fond of avalanche mechanics. Gonzo's Quest Megaways looks like a guaranteed winner in my book. I am looking forward to giving this game a tryout. Thank you for the story.

I checked this game out just the other day. The overall impression of this game is good. But, as it is developed by Red Tiger, the free spin is very very difficult to get. The free spin in most of Red Tiger comes in every 300~600 spins on average, from my experience. The random feature of this game was good.

Big news! Can’t wait to try to head to head with the original!