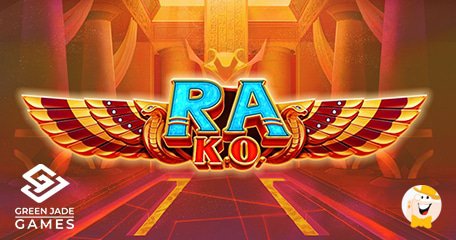 After making a lot of dust on the iGaming market last December by releasing Cotton Eye Joe in partnership with Rednex, a Swedish musical group, Green Jade Games is back in style to deliver more action on a 6x4 reel matrix in RA K.O.

The pioneering and innovative developer who recently introduced Book of Babylon, Dragon Lord, Alien K.O. and Coin Flip 2 has continued to upgrade the Knockout Series with this title, pushing the envelope further with full-scale automation of KO engine in another smashing project.

As announced, the latest video slot uses a 6x4 reel matrix with 50 ways to win on every spin. Players are sent on a quest to enter the tombs in ancient Egypt and look for the hidden treasures among pyramids, holy relics and sphinxes.

Only the chosen one will be gifted by the sun god himself, Ra, but one must avoid sandstorms and use all the tools possible to get their hands on big wins. This game is packed with the studio’s newest and most exciting feature for accumulating treasures out of the tombs; it is called The Auto Knockout and, as the name says, it automatically knocks out symbols on the reels to line up the Loot Box wins during base game.

Green Jade Games has made the plot even more interesting when a symbol in the game is knocked out, as it disappears and allows other icons to cascade down and fill the empty spaces for a new potential sequence.

However, Loot Box wins only occur when three of more boxes align horizontally. As described, the game will automatically achieve the best possible Loot Box win thanks to the Knock Out charges currently available to the player. Meanwhile, these quirks are earned at a rate of one charge per 11 spins.

When a winning combination includes three to six Loot Boxes, RA K.O. will reward players with the same number of prizes on Ra’s Bonus Reels. They are filled with special bonus symbols for added excitement and contain a host of possible rewards ranging from a 2x multiplier all the way up to a 2,000x booster.

That’s not all! The greatest god of Egypt will also step in and help players discover potentially humongous wins by randomly adding between four and 16 Magic Wild symbols to the reels after a spin. This function replaces all the existing symbols and increasing one’s chances to win.

“Our main focus is to improve our games all the time,” said Mark Taffler, chief commercial officer at the Malta-based studio.

As explained by the CCO, the gaming space is nowadays crowded, allowing very little space for error. Providers risk being outdated quickly due to the “cadence of content” so the team constantly eavesdrops and listens to its players’ feedback, including relevant ideas for further development from operators and partners.

Green Jade Games also frequently analyzes data to come up with new upgrades of the KO engine, bringing a seamless player experience to the fore.

Taffler said that the Skill Balance Pot technology featured in this game allows the studio to be more daring with new releases. With Cash Smash coming in hot this summer, we can expect a real winsome holiday season!

Egyptian-themed games have always been preferred by the players. This time the release comes with KO engine which will boost the interest more. I am sure this title will further improve the value of Knockout Series :)

I like how these emerging studios do their best to deliver a competitive product and win a bigger audience. New features are always well accepted and appreciated so I wish them all the best.