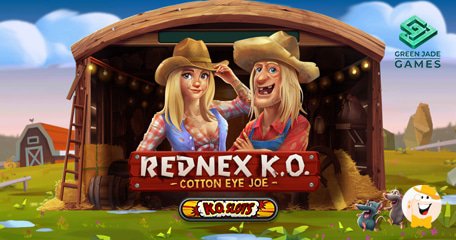 If you remember the smashing hit song “Cotton Eye Joe” by Swedish Eurodance group Rednex, which was published on their debut studio album Sex & Violins in 1995, get ready for a real tongue-twister slot style, as Green Jade Games introduces new knock-out offering in partnership with the legendary music band.

Although it is based on traditional American folk, the track gained immense popularity during the ‘90s and a very positive cricital reception, mostly thanks to its highly energetic combination of folk, techno rhythm and bluegrass – traditionally played on stringed instruments such as banjo and acoustic guitars.

By teaming up with artists, whose presence on the charts has lasted for 15 years after, having sold more than 10 million records to date, Green Jade is rebooting the dancefloor classic “Cotton Eye Joe” as a hillbilly, bull riding, dynamite fishing supercharged fun!

As a progressive game developer, Green Jade Games, has based its first branded slot game on a powerful and innovative Knock Out engine, which allows players to knock symbols and experience an engaging and captivating play time.

Rednex K.O. is designed to get players moving and tapping their feet as soon as the reels start spinning. Landing big wins depends on lining up at least three or more suitcase symbols, as this combination triggers bonus features such as instant win and the dynamite bonus mode. The more suitcase symbols on the grid, the greater the number of sticks of dynamite (players receive 4, 6 or 8 respectively).

Among the greatest attractions in this game is also the patented Skill Balance Pot (SBP), which rewards players after successfully aligning three or more winning suitcases as they smash one or up to ten symbols! Users are also awarded relevant RNG determined wins in this mode, increasing their chances of winning other funds not claimed by other players.

“Cotton Eye Joe is a truly iconic song and provides the best possible soundtrack for Rednex K.O which captures the fun and chaos of the redneck world in a slot that is thrilling and entertaining to play. We’re delighted to launch a branded game so early on in our journey as a content developer and couldn’t have wished for a better partner in the rootin’- tootin’ REDNEX.”

“We know our K.O slots are 5x more popular than standard slots and look forward to working with operators to help them leverage the potential of Rednex K.O and the other K.O games in our portfolio.”

In recent months, the Malta-based supplier has strengthened its position on the global iGaming scene by appointing NetEnt’s former member Mark Taffler as CCO, but also by signing multiple agreements with various design studios and software vendors.

Among the company’s latest content partners is Edenberg Design AB, as well as SoftGamings and SkillOnNet, a top provider of white label and full turnkey casino software. The companies signed a distribution deal on December 5, 2020 granting customers instant access to arcade-style games such as Hammer of Fortune, Candy Wall, Jade Puzzle, and Casino Blocks.

This looks promising, something I will try definitely. Great music :)

AMAAZING, this was one of my favorite songs while I was growing up and someone finally used it to create a slot, haha!!! Great idea, nice job Green Jade, wishing you luck!

Rednex - Cotton Eye Joe definitely adds a cool atmosphere to the game from Green Jade Games studio. The soundtrack in games means a lot to the player. I would like to test this game, I am waiting for it to be available on LCB, or maybe sooner I will find it in some casino.