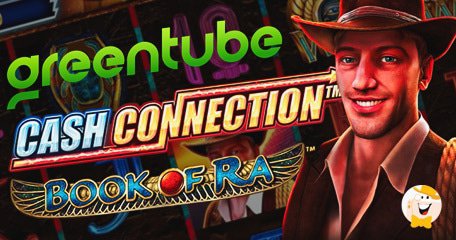 After finishing the month of August with Star Supreme, Greentube is back to enrich its adventurous slot division with a new foray into ancient Egypt.

Put on some explorer’s gear and get ready to climb the rope as you ascend the archaic monuments and graceful temples in Cash Connection – Book of Ra, a new title in the studio’s rapidly growing portfolio, fit for intrepid and venturous players.

Lock & Spin is Back!

As stated by Greentube, the global interactive unit of Novomatic, its latest video slot will go live as part of the re-designed Reel Reveal series.

Cash Connection – Book of Ra also combines everything that players know and love from the eponymous series and the entire Book of Ra brand.

The studio has incorporated its popular Lock & Spin mechanic with four jackpots into the game, enabling players to start another exciting journey through ancient North Africa.

Set deep within a temple filled with gold coins, the third title in the Cash Connection series takes action on a standard 5x3 grid. The Lock & Spin feature is triggered when six coin symbols land on the reels in the base game. They must appear on the same spin and there are three chances to fill the rest of the board with coins, once the feature is triggered.

When a coin symbol lands on one of the reels, it’s locked into place until the end of the feature. The spin counter resets back to three, giving players a bigger opportunity to land more coins.

Alongside Cash Connection – Charming Lady and Cash Connection – Sizzling Hot, this is the third title to join the popular series; this also means that it’s linked to the other two Grand and Major Jackpots, increasing customers’ odds to walk away with a colossal payout at some point.

However, apart from the coins with win values on them, it’s alsopossible to land a coin with mini, minor or major jackpot. The values of these symbols add to the player’s overall feature win.

If you manage to strike the game’s highest prize, Beethoven’s Ode to Joy will play in the background as the coins continue to rain down the screen.

Greentube Live in the US

On 15 September, the studio has made a milestone agreement with a luxury hotel and casino, Golden Nugget.

In doing so, the NOVOMATIC Interactive division successfully partnered with the operator’s online gaming branch and made its long-awaited debut in the US.

“The US offers unparalleled potential and is a key territory for us going forward as regulation continues to make headway across different states,” said Michael Bauer, CFO/CGO at the company about the market entry.

“a new title in the studio’s rapidly growing portfolio”

Great news for all Cash connection series fans...I can't wait for the next one!

It took them a while but the game is finally here! Always excited about the Cash Connection series, it pays like crazy!