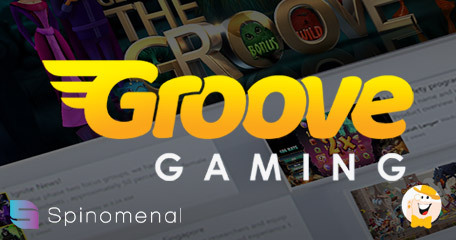 One of the industry’s biggest platforms and aggregators, Groove Gaming, has once more significantly expanded its presence on the global market. This time, the company has agreed with Spinomenal to distribute its mobile-first games licensed by the Malta Gaming Authority to players in several jurisdictions.

The main reason for partnering with Spinomenal is its strong list of double-digit iGaming certifications, which plays an important role in the star studio’s growth strategy. The brand is among the fastest-growing content providers in the industry right now, featuring a suite of more than 200 HTML5 games, with 8 to 16 new releases in the previous months.

Recognized in the iGaming business as one of the highly innovative technology companies, whose main focus is on machine learning math modules, quality graphics and intriguing features, Spinomenal has raised its value with hits like Demi Gods IV Thunderstorm, Wolf Fang Iron Wolf and Majestic King Sunset.

Among other games in Spinomenal’s premium catalog are also classics like Egyptian Rebirth II, Majestic King, 4 Horsemen II, Age of Pirates, Poseidon’s Rising, Queen of Ice, Book of the Divine, as well as highly engaging titles such as Times of Egypt Pharaohs Reign and Mammoth Rampage.

Since the latest partnership with Groove is primarily based around the studio’s MGA license, this aggregator is focusing on global expansion plans and entering more regulated markets. Meanwhile, the supplier has secured many licenses in leading international jurisdictions, including the one from UKGC, Greece, Ontario Canada and the US State of New Jersey.

It is no secret that Spinomenal and its star studio have made a tremendous effort over the last few years to achieve exponential growth in the industry. The company is focusing strongly on understanding tis players preferences and innovations, mainly Network Tournaments, where players have repeated chances of landing the prize pool total.

At this moment, Groove Gaming hosts a cluster of over 70 operators that is capable of bringing innovative solutions to the player and the casino within the MGA jurisdiction. Earlier this year, Spinomenal was even awarded the ISO 27001 certificate, an international standard for information security.

Although Groove Gaming boasts a powerful platform with thousands of casino games that operators can access via easy integration, the company is hoping to build a powerful cluster of new content solutions in the upcoming period.

According to Lior Shvartz, CEO at Spinomenal, getting an MGA license marks a milestone moment in history for the company and it should help Groove open new avenues for the team in a region that has ‘unrivalled significance’.

“Spinomenal has an impressive suite of games backed by the skill of a team that is delivering on their destiny to bet he new business darling for those with a European vision. Spinomenal’s MGA license will help us clinch a lot of new business with partners in our operator cluster for these compelling games,” concluded Yahale Meltzer, COO at Groove.

“Spinomenal has raised its value with hits like Demi Gods IV”

Good choice, Spinomenal’s games are getting better and better as we speak!