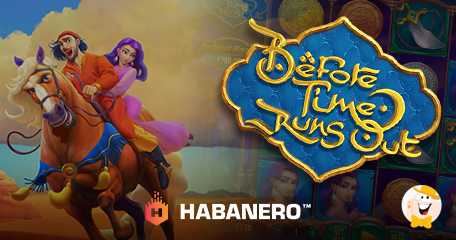 Premium developer and supplier of video slots, Habanero, has unveiled their new fantasy-themed slot title - the exhilarating Before Time Runs Out!

The game is another Eastern-inspired slot that takes players on a “magical quest” to faraway ancient Middle Eastern lands. The 5x4 title is packed with Scatters, Wilds as well as a Coin Respin Feature that allows players to win prizes up to 50 times their bet.

Before Time Runs Out has the absorbing Duel Feature that invites players to have a go at the Prince’s battle against the main villain, the Vizier, and collect all six gems before the time runs out. This will reveal up to five extra Wilds.

These gems are awarded if the Prince beats the Vizier in the Duel during the free spins, if a player collects six winnings x1,000,000 the line bet.

The game will be distributed across Habanero’s network of operators, that was extended by the supplier’s acquisition of Malta Gaming Authority’s Critical Gaming Supply License.

The brand is continuing their growth across Europe and Latin America by introducing new audiences to some of the highest quality content in the business.

“We are thrilled to launch Before Time Runs Out, a hectic Habanero adventure filled to the brim with enthralling features and world class mechanics, as well as inviting symbols and sounds.

We’ve been racking up the wins in recent months, beginning the year with new accreditations, tier one operator partnerships and groundbreaking product rollouts. We can’t wait to maintain that momentum in the weeks and months to come.”

Have a look at the official game preview below!

Habanero has recently acquired an entry into the regulated online gambling market of Romania.

This marks the 16th certification for the company, and a milestone in this Southeastern European country.

The company will supply Romanian-based operators with immersive content offering.

“Habanero invites players to vanquish the villains in Before Time Runs Out”, europeangaming.eu, March 31, 2021.

“new fantasy-themed slot title - the exhilarating Before Time Runs Out”

This game has an interesting Duel Feature, and this 1,000,000x the line bet sounds great.