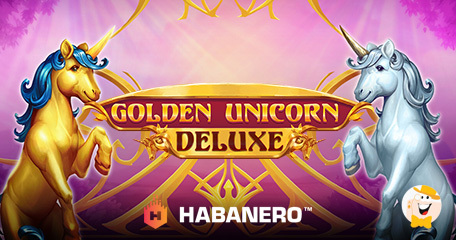 As players around the world keep having a blast on one of June’s biggest magical quests in Golden Unicorn Deluxe, we can’t help but notice that Habanero Systems has made quite a quirky little new enchanting adventure this time.

Nurturing a 5×3 reel setup and an eye-catching design with vibrant colors, magical creatures and enhanced visuals, this major hit from the studio’s last month’s roster will captivate you on almost every spin. If you’re up for some charming gambling experience with an enthralling soundtrack in the background, saddle up!

It’s been a month since Habanero Systems rolled out a breathtaking new take on the fantasy genre, and the game is still maximizing retention and engagement in various markets. Golden Unicorn Deluxe is packed with wild symbol nudges and multipliers by up to 32x the bet, giving players a significant boost during base game.

Among its biggest sensations is the elevating Chest Feature, offering players another chance at winning cash prizes by picking chests. It is possible to win up to an astounding 100 mini games in this round, while the feature can be retriggered time and time again.

In certain jurisdictions, the bonus spins and Chest Feature can even be purchased by players, enabling them to enter both attractive modes on their command, provided enough cash is in the balance.

On a side note, the unicorn will substitute for all symbols except the palace and chest, giving you a chance to complete winning combos and make a great win. Opening chests will display three different crystals. Possible prizes as a multiplier of the bet level are between 10x to 10,000x the stake.

Toni Karapetrov, head of corporate communications at Habanero, commented about the studio’s latest release from June:

“We’re delighted to give our players another captivating title which features a beautiful blend of audio-visuals and unique features, delivering an immersive and eye-catching experience.”

He also said that offering up to 100 mini games will please any player and provide them with a fulfilling opportunity to take home truly big rewards. See the video for more info:

On the Right Track

After an extraordinary 2021, which will be remembered for partnering with Rush Street Interactive, securing a license from MGA, and entering Romania, Habanero continues to reinforce its leading position on the market. The company is now a tier-one supplier at 888Casino, Codere, Betway and LeoVegas thanks to securing notable deals in the last couple of months.

Stay up to date with new game releases in July too as Habanero will return to blast off to a galactic triumph with Space Goonz!

I don't play that much Habanero games, but I like this fairytale unicorn theme.

Oh I already played this it’s really quite cute and fun, just the way you described it! :)