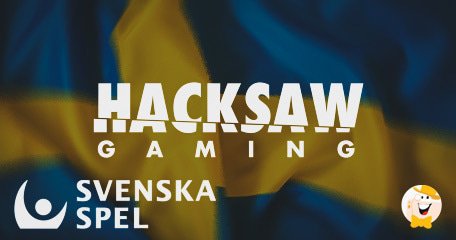 Up and Coming Maltese Provider to Go Live in Sweden

After launching its entire portfolio of games in Denmark at the beginning of October, one of the most prosperous iGaming studios from Malta is back to proudly announce a new partnership with the Swedish state-owned operator, Svenska Spel Sport & Casino.

Thanks to the new arrangement, Hacksaw Gaming will launch its entire casino-based content in Sweden, including titles such as Chaos Crew, Stack’em, Hop’n’Pop and one of the latest hits too, named Wanted Dead or a Wild.

Agreement Made Possible Through SG Digital

According to the report, the latest deal between Hacksaw Gaming and Svenska Spel has been sealed thanks to the recent partnership with Scientific Games Open Gaming platform.

“Hacksaw Gaming has gone from strength to strength over the past 2 years and we pride ourselves on working with the best in the industry and a partnership like this with Svenska Spel Sport and Casino highlights just that,” said COO Marcus Cordes about teaming up with the Swedish state-owned company operating in the regulated gambling market of Sweden.

Cordes revealed that the studio’s presence in the Scandinavian market has grown rapidly over the last few months. Many of the company’s hit titles are loved by Swedish players, and Hacksaw is excited about collaborating with Svenska Spel Sport & Casino, since the partnership ensures further slot content rollout in the country, making it a good candidate for a firm favorite amongst customers on the SG open gaming platform.

Meanwhile, Niklas Örtbrant, head of online casino at Svenska Spel Sport & Casino, stated that Hacksaw Gaming is capable of bringing a high-quality casino portfolio to the platform thanks to a host of entertaining games, such as Tasty Treats, Cash Quest and Rocket Reels.

Svenska Spel looks forward to working closer with the Maltese provider and increasing the excitement in months to come as players get to expand their gaming experience with new releases like Xpander and Toshi Video Club.

The Deal with Flutter

Earlier in September, Hacksaw Gaming announced its first collaboration with Flutter Entertainment, an Irish bookmaking holding company created after the merger of Paddy Power and Betfair.

The agreement helped Hacksaw launch its content across the Paddy Power and Betfair brands through an aggregation partner, Relax Gaming.

Sealing a partnership with Paddy Power Betfair strengthened the studio’s UK presence, since the bookmaker was a renowned operator within the Great Britain’s gaming sector before merging.

This deal is Hacksaw’s first agreement with Flutter Entertainment, and the developer has high hopes that a relatively new player base will enjoy its growing gaming portfolio in the future.

“a new partnership with the Swedish state-owned operator”

This is a big step forward for the studio. Hacksaw is a studio with great potential and provides an excellent portfolio.

This is great news! Congratulations on this partnership! But I have to agree that they should deal with innovation in other areas as well.

They are focusing more on reaching new territories than making games, but in order to stay in this business they have to be innovative and make regular updates of portfolio on a monthly basis, like Pragmatic, Yggdrasil and the rest...