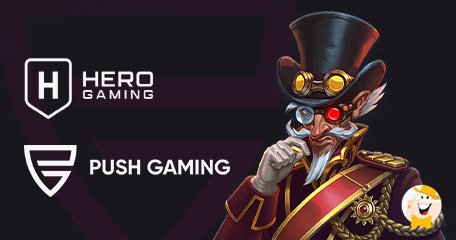 After entering into a strategic partnership with White Hat Gaming and releasing Fat Drac on 14 October, a thriving B2B casino supplier, Push Gaming, is proudly announcing the extension of an earlier partnership with its existing client – Hero Gaming.

According to details, the latest agreement will give the operator instant access to the supplier’s immensely favorable compilation of slots. This cooperation will be distributed through Push Gaming’s MGA and UKGC licensed platform, where players can find mega hit titles in the style of Jammin’ Jars 2, Booty Bay and other recent releases.

The list of casino brands to soon carry Push Gaming’s laudable products will include Casino Heroes, Boom Casino and Simple Casino. However, while they represent the latest online gaming sites to benefit from the provider’s ‘player-first’ slots, we will see more platforms joining in the upcoming period.

As mentioned by the studio, this deal is just one of several that will help the supplier expand globally in 2021. Apart from going live in Malta and the UK sector, this company is also keen on reaching a variety of other regulated markets, whose number will be known by the end of Q4.

Fiona Hickey, head of sales at Push Gaming said about the expanded collaboration:

“Hero Gaming has provided a leading shop window for our games for some time, but this move is going to be a boost to the streamlined delivery of our content to its players.”

Hickey added that the team at this studio has added a lot of value over the years, making Push Gaming delighted to see the development of new partnerships via its own platform.

Casino manager at Hero Gaming, Sven de Waard, stated that the company takes great pride in creating an environment where innovation and creativity are fostered to a high standard.

According to Waard, the gaming roster will supply Hero with the culture it strives to achieve and works hard to nurture.

Push Gaming is proud of its past achievements, and this announcement comes right after a hugely successful year for the company. Among its greatest results so far is picking up the honors at the recent Game Developer Awards and being shortlisted for four crowns at the prestigious EGR B2B Awards 2021.

On a similar note, the company has continued to build on the growth momentum as well; its decisive 2020 acquisition of an MGA and UKGC-licensed platform is helping it to ensure rapid expansion across Europe and launch within several new markets in the coming months.

Admired as one of the iGaming industry’s increasingly entertaining suppliers, Push Gaming is now live across several Europe’s leading regulated markets, collaborating with Casumo, LeoVegas, Entain and The Rank Group, to name a few.

Great deal for both of them. Love to see Push Gaming expanding.

They are now ready to conquer new markets. Good job for both companies.