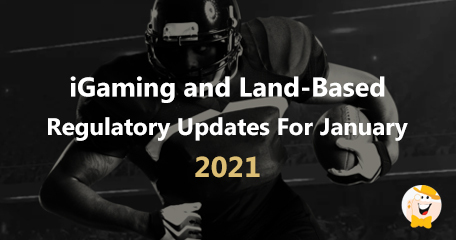 New year, new challenges ahead! Will 2021 be any better than 2020? It depends on the global pandemic situation. The operators, regulators, authorities and other relevant bodies are preparing for what’s going to be a hectic year, by the looks of it.

The US states were particularly engaged and busy during the first month, while the rest of the world is still taking it easy. Here is the full breakdown of all that’s happened regulation-wise in the world of gambling.

US Land-Based and Online Gambling

New Jersey: The DGE did not allow online gambling operators to offer promos to customers in order to reverse withdrawals from their account.

Virginia: A legislation was introduced to the House to permit more sportsbetting licenses to be given to operators. The bill includes a motion that allows the Lottery Board to give out an additional four sports betting licenses in the state. The bill comes after the the news that 25 operators applied for the 14 licenses currently available; FanDuel became the first operator to launch its online sportsbook in the state on 21 January 2021.

Mississippi: Senator has introduced legislation that will allow online sports betting in the state. The bill, SB2396, would allow commercial operators to provide one online sports betting skin per license, however it did not define the number of licenses that would be allowed nor the tax rate.

New Mexico: Legislators have introduced a bill to authorize retail and online sports betting. The bill, HB101, would permit six licenses for sports betting and table games to be granted by the New Mexico Lottery Board. This body will also be in charge of developing the regulatory and taxation framework for the industry.

Michigan: Governor Whitmer has signed the legislation that will allow interstate online poker bill, SB991, to be turned into law. The bill allows online poker operators licensed in the state to share player and liquidity pools with other states who have also regulated the activity. The bill takes effect in late March. The Gaming Control Board granted approval to nine operators to launch online sports betting and casino games on 22 January 2021.

Oregon: Governor Brown introduced legislation to expand online sports betting and open the market to an unlimited number of commercial operators. The bill, HB2127, would give out licenses to operators if they meet the licensing requirements.

Texas: Local media sources reported that the State Governor’s Office reached out to legislators from state’s that had regulated sportsbetting, including New Jersey, seeking advice on the best way to authorize and regulate the activity.

New York: In his State of the Union address, Governor Cuomo proposed legislation to authorize and regulate online sports betting via a single operator model. The operator would be selected by the state’s Gaming Commission and is obliged to have a partnership with one of the state’s four commercial casinos. Legislators introduced bills to the Assembly and Senate to regulate online sports betting in the state. Bills were introduced to their respective chambers to permit the state’s commercial and tribal casinos to offer online sportsbetting at a tax rate of 12% of gross win plus a fee of 0.2% of turnover to be directed to the sports governing body.

The Netherlands: Dutch Government announced another one month delay of Remote Gambling Act enforcement date to April 1st and, as a consequence, an extension of the launch of the online market to October 1st.

Finland: Regulator Veikkaus introduced the identity verification on gaming machines in the country on January 12th.

France: ANJ, the regulator, will proceed with the digitalization of the country’s self-exclusion scheme, allowing gamblers to self-exclude online rather than in person at a police station as currently required.

Germany: A trade association for gaming machines announced it had got a significant public backing for its petition to oppose proposals to shut down any gaming machine hall within 500 meters of a school.

Rest of the World

Japan: The Yokohama prefecture published the implementation policy for its integrated resort proposal bid and simultaneously launched the request for proposals process for operators wishing to develop an integrated resort in the province. The process is scheduled to close in June 2021.

Brazil: Ministry of the Economy announced the regulations to rule the sports betting industry are going to be finalized and released in July, which will allow the market to launch in 2022.

Philippines: The Supreme Court granted a stay of execution against the imposition of the recent five (5) % tax on POGOs. The Court ruled the tax was unconstitutionally included in legislation intended to assist the country’s economic recovery from COVID-19.

China: The Government passed legislation to introduce big punishments on citizens who are operating gambling businesses in the country and overseas. The new law also criminalised businesses which solicit and facilitate Chinese citizens going abroad to gamble.

A neat breakdown, thanks!