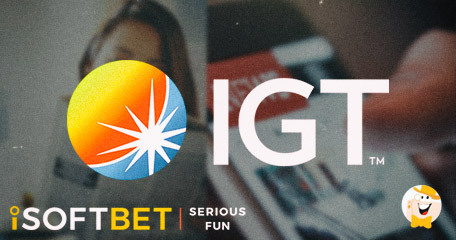 The global leader in iGaming, IGT, formerly known as Gtech and Lottomatica, has announced a definitive agreement to acquire iSoftBet for approximately EUR 160 million in cash.

In 2021 alone, this rising star of development has generated revenue of approximately €30 million and its portfolio now contains approximately 125 in-house titles, followed by more than 4,600 third-party releases through the GAP platform. Located in England, Malta, and Romania, with some 350 employees and contractors, iSoftBet services 260 iGaming operators while its products are certified in 20 European jurisdictions.

As a global leader in the business, IGT delivers entertaining gaming experiences for players across the world via all betting channels, including lotteries and slot machines, as well as sportsbooks and digital.

With its well-established local presence and active collaboration with regulators in more than 100 states, IGT continues to deliver value by adhering to the highest standards of service, integrity, and responsibility too.

The company has 10,500 employees and holds a steady course in terms of leveraging a wealth of compelling content on the market, as well as substantial investments in innovation, player insights and operational expertise.

By acquiring iSoftBet for EUR 160 million, IGT will elevate the size of PlayDigital’s content library to approximately 225 proprietary games. In addition, the platform will provide a selection of top-class third-party games, such as the recently launched Plunderin’ Pirates: Hold & Win, Gold Digger Megaways or the award-winning title from 2021, Moriarty Megaways.

On a similar note, leading data-driven promotional and user-engagement tools will also be included in the package.

This will enhance PlayDigital's competitive capabilities with a comprehensive casino portfolio across Europe and within North America as IGT provides some of the best-in-class games and technology.

As reported, the acquisition will be completed during the second quarter of 2022.

Agreement with Aristocrat and Atlantic Canada

As a result of the first arrangement, IGT will be eligible to “propel the evolution of gaming” thanks to a host of extraordinary content and advanced mechanics supported by RGS patent and other cutting-edge features.

The second collaboration will allow IGT to launch VLTs with high-performing themes in unity with Atlantic Lottery Corporation. Among the upcoming titles are The Wild Life, Big City 5's, The Big Easy and Royal Spins Deluxe.

Meanwhile, IGT promises to deploy The Price Is Right VLT content by 2023. This game is inspired by North America's highest-rated daytime television game show and is among the most recognizable brands in the provider’s game library.

IGT has been very busy lately, they are really doing a very good job. This will further strengthen their market position.

Woh now every major company in this business has a successful studio up their sleeve! The last two years were definitely a period of acquisitions in iGaming, only smaller studios are still independent... although to stay competitive they unite with other global leaders to leverage production and distribution... wasn’t expecting...

Woh now every major company in this business has a successful studio up their sleeve! The last two years were definitely a period of acquisitions in iGaming, only smaller studios are still independent... although to stay competitive they unite with other global leaders to leverage production and distribution... wasn’t expecting this from iSoftBet, got me by surprise. Microgaming too.