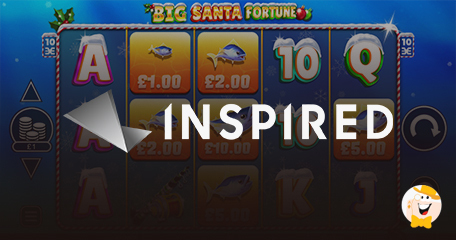 Can You Handle Three Festive Slots at Once?

If you’re only discovering Big Football Bonus by Inspired Entertainment, a large gaming provider with more than 50,000 machines around the world, make room for three more slots coming up this December.

The global games technology company is back for the festive season with a magic trio of best-in-snow slots, naming them Big Santa Fortune, Santa LinKing, and Santa’s Winning Wishlist.

May the Joyful Spirit of the Holiday Season Begin!

Get ready to dash through the snow this season as Inspired makes a swift comeback to combine the thrill of iGaming with the joyful spirit of Christmas. The studio’s next three games are packed with rich, vibrant visuals to lift the holiday atmosphere, but players can also expect an array of mechanics and gameplay styles.

All three games are coming right after Big Football Bonus, which Inspired launched around November 25th to celebrate the ongoing FIFA World Cup in Qatar 2022.

By presenting three magic slots with a fun and festive theme, Inspired is bringing the best-in-snow experience this December. Take a look at the upcoming titles if you truly revel in the joy of unwrapping presents…

To open the season of winter holidays, Inspired Entertainment is bringing a lot of festive cheer in Big Santa Fortune, a Christmas-themed 5x3 reel, 10 win-line slot game. Its payout percentage is seeding at 94.8% and in a way, the title represents a copy of an earlier release Big Fishing Fortune, which is also a top-performing game.

However, this festive edition is filled with exciting graphics and mechanics, offering players big wins and an engaging winning experience around Christmas!

The storyline is taking us into the depths of the ocean, where three, four or five scatters activate the Match 3 Game. It’s a level where players determine the value used on the bonus Big Sticky Fish but they must find three matching fish symbols first to enable the game’s highly entertaining Big Santa Bonus.

In this mode, players have unlimited honorary spins until Santa catches the Big Sticky Fish. If more fish values are collected, they are also awarded to the player.

The second part of the same festive franchise is called Santa LinKing, and it comes in full regal glory with a 5x3 reel set and a 20 win-line pattern. This game has an RTP of 95%, and it was developed with the iconic and highly popular Reel King brand.

The second Christmas installment features a nostalgic appeal with lots of classic slot symbols and innovative bonus mechanics. They offer a unique and entertaining playing experience, allowing players to light up the reels and kick-start the Santa King Bonus.

There is a chance to win up to a staggering 500X the bet in this mode and if by any chance you land six coins, you immediately enter into the Santa LinKing feature, designed specifically for added fun and excitement.

Saving Best for the Last

Getting players firmly in the mood for a traditional Christmas is Inspired’s third and last release for December, called Santa’s Winning Wishlist. It also plays out on a standard 5x3 reel set, featuring only 20 win lines. The game’s solid RTP of 95% will take you on a ride to the North Pole, where snowy graphics and festive treats offer big wins and bags full of joyous moments!

When landing expanding wilds as the colorful Santa, look for the bonus symbols as they trigger the Santa’s Winning Wishlist packed with 10 complimentary spins. This is a progressive level featuring reels with multiple stages while the aim is to advance along the trail for more spins.

“Inspired is thrilled to announce the launch of its three tree-mendous holiday-themed games to suit an array of players, from the regular bonus hit player to the classic slot lover,” commented Claire Osborne, vice president of Interactive at Inspired.

Now head over to your favorite Inspired partner online casino to the studio’s festive games doing their magic!

“The studio’s next three games are packed with rich, vibrant visuals”

Inspired Entertainment has found a great way to slowly get us into the holiday spirit. Great slots.

Great preparation for the holidays, each slot is a story in itself, so enjoy.

Nothing better for the holidays than 3 Christmas slots! They nailed it this time.