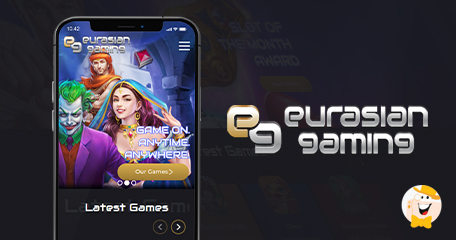 Headquartered in Malta and Italy, Eurasian Gaming studio quickly captured the attention all over the globe thanks to its unique slots, bingo, and fishing games. Relying on modern technologies, the studio manages to deliver top-performing online content which mimics the aesthetics of land-based machines.

Holding multiple seals of approval which confirm that their games are compliant with the industry’s highest standards, their titles are classified as safe and entertaining. So far, their releases have hit the shelves of numerous casinos throughout Europe, the CIS, Asia, and Latin America.

Established in 2018, the studio quickly became recognized for its versatile products done in HTML5 technology, tailored to meet the needs of an international audience. The company was founded by Saverio Castellano, an industry veteran with previous experience at cabinet specialists Aristocrat and NOVOMATIC.

…across desktop and mobile devices, their products instantly conquered players all over the world. In addition to immersive visuals, the majority of releases from the portfolio are equipped with “buy bonus feature” and “fast play option,” along with customizable Jackpot, which allows punters to adjust the atmosphere based on their personal preferences.

So far the supplier was granted a Curacao license and has certificates to operate in the Italian, Spanish, Lithuanian, and Colombian markets. Moreover, Eurasian products are tested by Gaming Laboratories International (GLI) against strict Spanish standards.

In June 2021, the up-and-coming provider penned a deal with one of the industry’s giants - Slotegrator. Recognizing the huge potential in its content, the company is positive that its games with unique touch will make an excellent addition to their platform.

Worth stressing out is that…

…these agreements enabled the studio to expand across numerous key markets, such as South America (Peru, Argentina), Italia, Spain, and many more. Eurasian Gaming’s highly diversified portfolio is already part of many lobbies worldwide.

Catching a Glimpse of the Portfolio

What all of their games have in common is state-of-the-art graphics and sounds combined with solid math models and a variety of features. This unique mix is wrapped up in multiple popular themes loved by players everywhere.

…some of the slots, like Pharaoh’s Tomb and Horus Eye, take place in Egypt, while Tropical Crush is equipped with tons of juiciest fruit symbols. Then, there’s Feng Huang and Shaolin, homages to Chinese culture as well as Witch’s Brew, and Wizard, dealing with magic and mysteries.

In addition to this, there’s a dedicated space with fish hunting games. Let’s not forget to mention a special corner with a variety of Bingo products, which are also themed.

For more information on the studio’s work, take a look at the video. In case you’ve already checked out some of their games, let us know how you liked them in the comments section below!

“games are compliant with the industry’s highest standards”

I like to see new competitors on the market, which means that players will have more choices to find their favourite.

I checked out a few of their games. The quality and design are outstanding.

I like the video about them, I'm sure they will have a lot of success.

Wow, it’s great that they use so many different themes for slots, that will for sure secure them a high position across numerous markets and lots of fans.