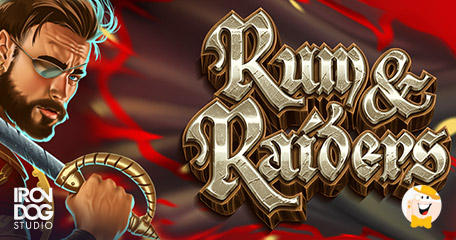 Iron Dog Studios invites players to prepare themselves for another staggering experience in Run & Raiders. This is the newest iGaming addition to the Hold & Win series with up to 25,000x.

Thanks to the perfect combination of 5 reels and 4 rows, you will reveal different pirate features inside the online slot. Your goal is to look for the Skull & Bones Scatter elements because three of them will activate the feature-packed Hold and Win bonus game.

As you step into the Hold and Win, there will be three re-spins that refill each time the user lands another multiplier or character multiplier. Here is the overview of possible awards:

If you are successful in filling the entire reel, you will trigger one of two additional bonus reels, one on every side of the board, providing even more space for multipliers to show up.

If you miss the Hold and Win feature by hitting only two scatters, you will activate the second feature, Broadside Bonus. You will target a merchant ship, and look for broadside spins that bring multipliers. This enhances your winnings even more.

Iron Dog Studio is a cutting-edge brand within the 1X2 NETWORK. It is passionate about delivering new concepts that entertain users. They create products for the future while using the strength of the past and work to deliver a superior gaming experience focusing on the newest technological ideas.

“Evolving upon the ever-growing arsenal of Iron Dog Studio’s Hold and Win games, Rum and Raiders comes aboard with a whole roster of pirates to help you Hold and Win the gold on a re-spin!”

“One new feature I’m excited to see players enjoy is Rum and Raiders’ bonus round: Broadside, where they’ll plunder enemy ships for plenty of loot.”

Players in Ontario are now able to enjoy the 1X2 Network’s portfolio of games via 888casino alongside the games from 1X2’s sister company, Iron Dog Studio. This is one of the latest deals secured by the company in Canada and some of the includes games are Wolf Strike, Megaways™ Jack, Pirate Kingdom Megaways™, and 1 Million Megaways™ BC.

“combination of 5 reels and 4 rows”

Love the visuals in this game, and what a great name for all rum lovers! 😃

Finally another great pirate game by Iron Dog Studio. Awesome fun if you are in for a fun video slot!

What a stunning release with so exciting characters and enormous win potential...Looking forward to playing this game!