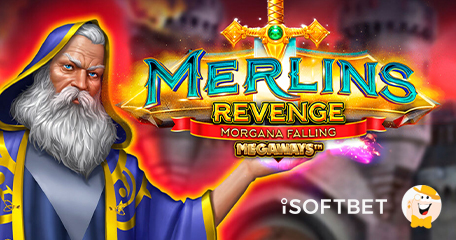 Continuing to play with different themes and versatile features, iSoftBet is happy to announce another fun-filled online slot. Exploring the Arthurian legends one more time, the studio rolled out Merlin’s Revenge Megaways™ and equipped it with no less than 117,649 ways to win.

In terms of features, this marvelously illustrated story bolsters Max Megaways and Merlin’s Magic modifiers, as well as cascading wins and Bonus Buy in specific jurisdictions. Worth noting is that this installment is part of the studio’s captivating Twisted Tale series, which has so far introduced visitors to a variety of authentic characters and unusual storylines.

Delivered by iSoftBet, Merlin’s Revenge Megaways™ relies on elements of Arthurian legends. Though it is widely discussed whether King Arthur was a real person or just a myth, himself and all the people associated with him (Merlin included) have served as an inspiration not only to writers and filmmakers but slot developers as well.

Commenting on the launch of its Arthurian story, Mark Claxton, Head of Games at iSoftBet, said:

“Our journey into Arthurian legend continues in our latest launch, Merlin’s Revenge Megaways™. With a darker take on one of history’s most famous wizards, as well as the Symbol Collect, which adds prolonged excitement during Free Spins, we are confident this is another magical hit in our portfolio.”

…the game displays 117,649 ways to win, which means plenty of opportunities to score valuable rewards. It accommodates two different modifiers, Max Megaways and Merlin’s Magic, which can hit the reels at any time.

Pay attention to the Sword symbols, as they are in charge of activating the free spins feature, during which the gamble wheel can appear as well. While the bonus mode is on, the Symbol collect feature is active as well, opening room for additional winning opportunities.

It is interesting to mention that the most recent installment relies on the elements of another work of art from the series- Morgana Megaways, which tells the story of the evil enchantress Morgana. Sheriff of Nottingham, unveiled before Morgana was actually the ice-breaking title in the series.

…the series contains Queen of Wonderland, inspired by Lewis Carroll’s all-time favorite tale. Queen aside, one of the most prominent characters is Cheshire cat himself, which acts as a Mystery symbol.

Moreover, the collection contains Brides of Dracula Hold & Win with Pick a Letter bonus game, where players can score one of the three surprises- Win Spin, Bonus Add, or Wild Desire. Furthermore, there’s Scrooge Megaways, also with Hold & Win but other powerful elements such as cascading wins, Scrooge Cash Respins, and more.

Finally, Musketeer Megaways, showcased near the end of May this year, puts players before quite an unusual choice. They can either select to play the single reel game alongside Cardinal Richelieu or join D'Artagnan and the Three Musketeers on an astonishing four-reel adventure.

What an interesting slot theme, can't wait to try it out and see for myself!

Medieval Folklore is interesting for the slot theme, I'm sure players will enjoy it.

I always like games having a gamble feature. Let's chase Sword symbols and trigger the Free spins feature with a gamble wheel :)

I expected a little higher jackpot cash, but Merlin themes are always on the list for playing.

All these Twisted Tale games look powerful, you can feel that the team is enjoying developing those.